11 East Coast Hikes to Add to Your Plans 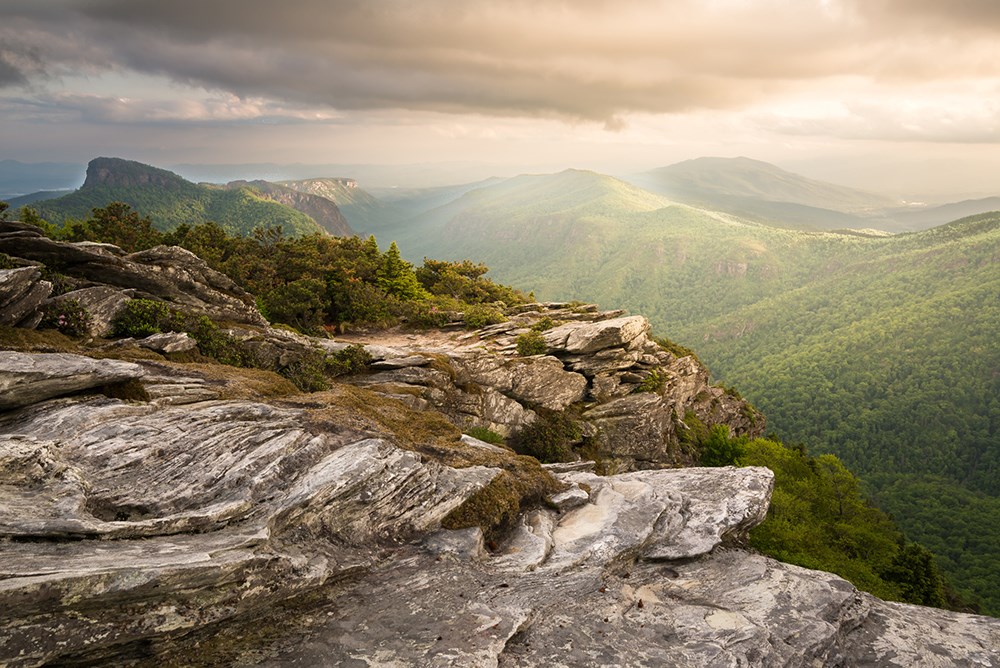 While the peaks don’t soar quite as high as the mountains in the west, hiking on the East Coast has its own unique rewards. In states like Maine, Pennsylvania, New York, and Massachusetts, hiking trails run the gamut from serene ponds and Revolutionary-era history to foliage-filled vistas worthy of a postcard. Covering a wide array of options, lengths, sceneries, and styles, these are 11 of the best East Coast hikes. 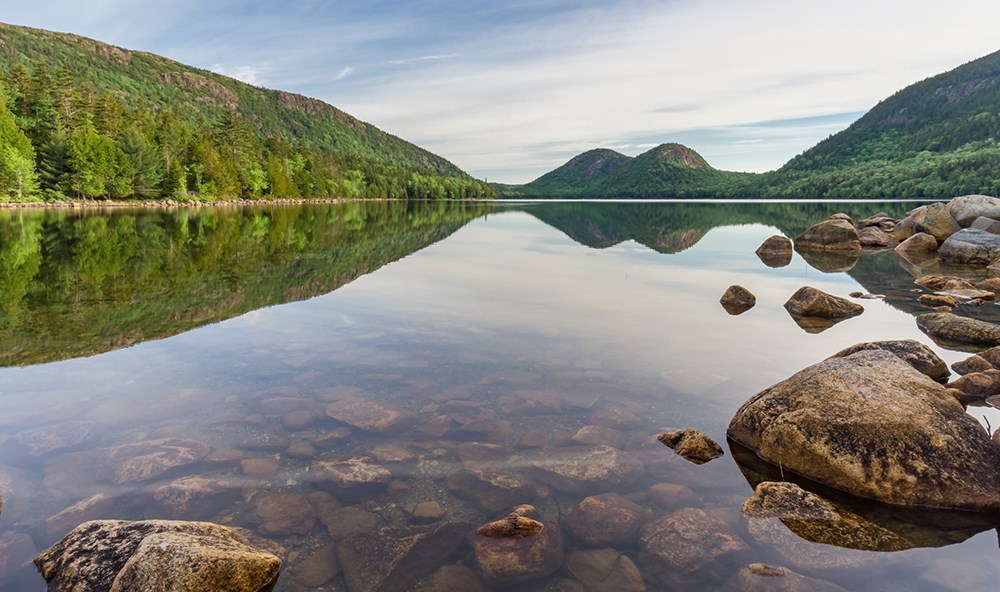 As one of the foremost hiking destinations (and wilderness destinations in general) on the East Coast, it can be hard to narrow down the trails at Maine’s almighty Acadia National Park. But if there’s one trail that seems universally crowd-pleasing, it’s the Jordan Pond Loop. Nestled on Mount Desert Island, the most popular and well-traveled portion of the park, Jordan Pond is a tranquil and pristine oasis surrounded by mountains and, come autumn, filled with vivid hues of orange, red, and yellow. The pond itself is the shimmering centerpiece for a 3.5-mile loop trail that weaves along the shore, through forest and over log bridges. It’s mostly flat and easy, making it good for most ages and abilities, and the scenery is nothing short of stunning. When you’re done, swing by the Jordan Pond House for lunch, and one of their famous popovers. 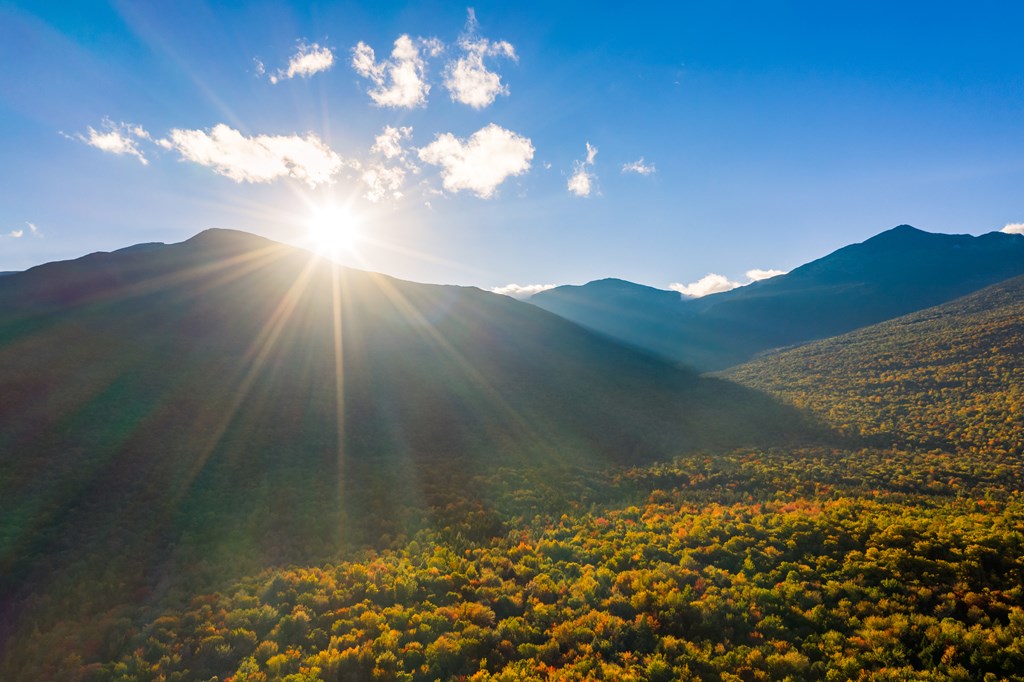 Home to the tallest mountains in the northeast, hiking in New Hampshire offers some of the most challenging — and rewarding — trails this side of the Mississippi River. The iconic summits, like Mount Washington, are behemoths that require months of training, but for equally impressive views amidst the White Mountains without the grueling struggle, opt for something like Sugarloaf. A popular skiing destination in the winter, it’s a hiker’s paradise in the warmer months, especially via the Middle and North Sugarloaf Trails, which total 6.6 miles in length. You won’t get quite as high as some of the other mountains in the Presidential Range, but you’ll be able to gawk at them from afar along the way, while traversing a trail that’s refreshingly moderate 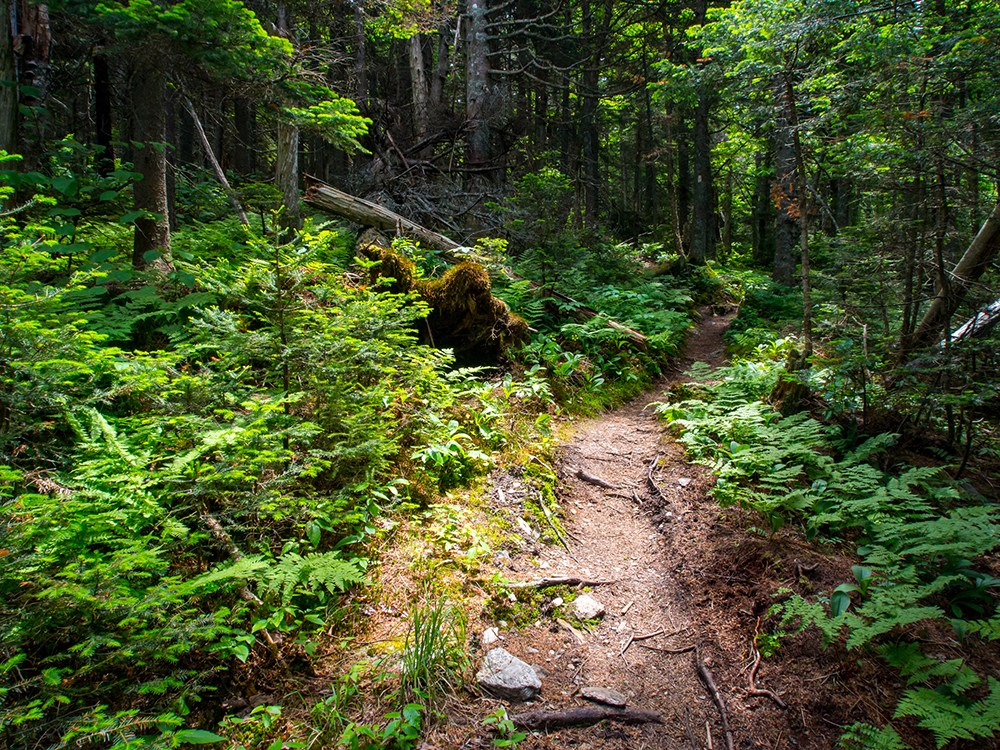 Looking for something truly epic, but not wanting to tackle the entirety of the Appalachian Trail? The Long Trail might be for you! The oldest long-distance trail in the country, preceding even the Appalachian, The Long Trail is just long enough that thru-hikers can actually tackle it in reasonable time — or of course you can just embark on scenic day hikes along the way. Roughly 272 miles in length, from Massachusetts to Canada, the Vermont-length trail takes about 19 days to do in total, but for the more moderate treks, start at the southern end of the trail in Stamford, Vermont. Other shorter options include the craggy Stowe Pinnacle Trail in Stowe, overlooking the Green Mountain valley, or the Lincoln Gap Road route to Sunset Ledge in Warren, which affords panoramas of Lake Champlain. 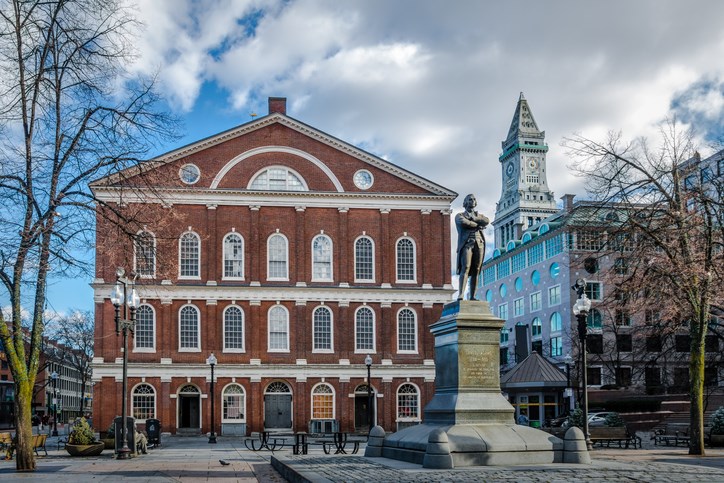 Not all hiking is wilderness and mountains. In fact, some of the best and most famed hikes on the East Coast are urban trails that swap the dirt for concrete, and the views are no less striking. The Freedom Trail in Boston is one of the best examples, and an outing that’s absolutely destination-worthy. The metropolitan route weaves through downtown Boston for 2.5 miles, before culminating at Bunker Hill Monument in Charlestown. Along the way, while following the brick path, you’ll experience some of the richest moments from Revolutionary American history as you pass historic churches, graves, and patriotic buildings like the Old South Meeting House, the Paul Revere House, and the Old State House. Be sure and stop at the National Park Service visitor center, located inside Faneuil Hall, where you can get more in-depth insight into the trail, partake in extended tours, and purchase items from the gift shop. 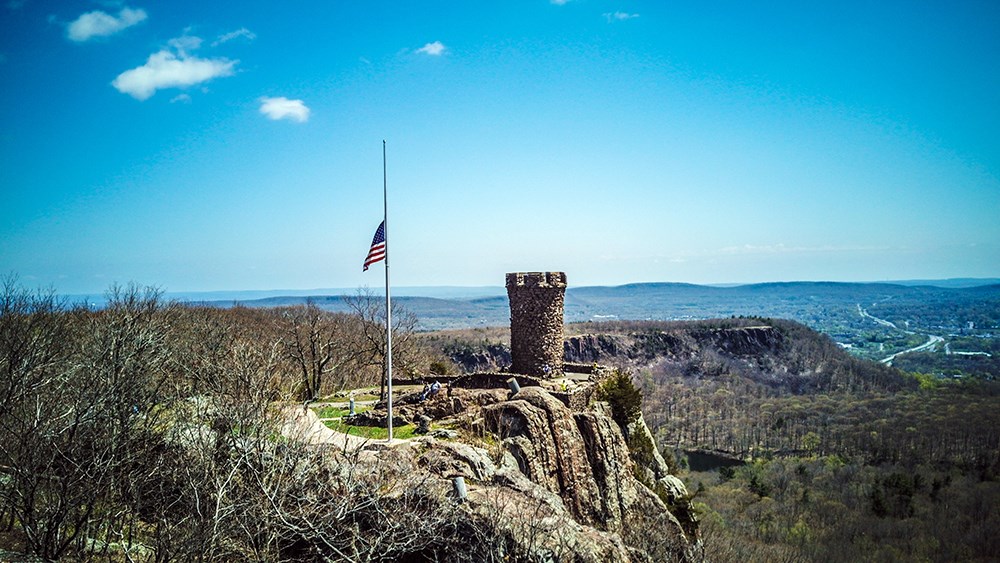 Offering the perfect mix of Americana history and all-natural awe, Hubbard Park in Connecticut is a prime destination for moderate hikes amidst nature and lore. The Castle Craig trail, in particular, exemplifies this juxtaposition. Just shy of three miles in length, it’s a relatively easy option for an afternoon hike, starting out at the trailhead for the White Trail by Mirror Lake. Begin your journey along the White Trail, then veer off towards East Peak after about half a mile, taking the White Spur Trail to the summit. It’s here where you’ll find the historic Castle Craig, a 32-foot-tall stone tower, along with sweeping views of the surrounding area, which is especially beautiful in the fall. The castle has a staircase inside that you can climb to the top, for an even better view. 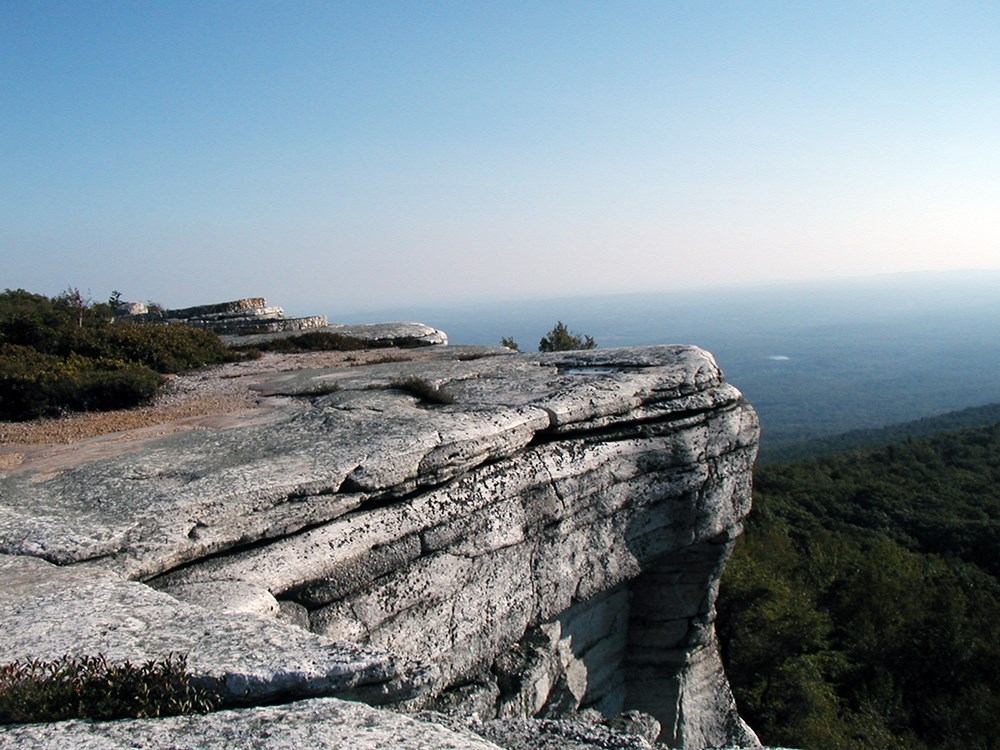 The Catskills in New York are famously filled with more mountains and hikes than you can count, and you could easily spend an entire year hiking nowhere else on the East Coast but here. A good entry point, though, especially for a leisurely day trip, would be the Sam’s Point Trail in Minnewaska State Park. It’s a 7.5-mile out-and-back trail that’s rated on the more challenging side of moderate, making it great for working up a sweat. And you’ll certainly be working, as the action-packed trail navigates through ice caves and up a wooden ladder. In case the hike itself wasn’t exciting enough, the western views of the Catskills and the cascading Verkeerderkill Falls are well worth the effort.

Conveniently located between New York City and Philadelphia, the Delaware Water Gap area is the ultimate nature escape for city-dwellers in the most urban region of the country. Among the many trails to explore here, one of the best options is the Mount Tammany Trail, located in northwestern New Jersey, across the river from Pennsylvania. Follow the Red Dot and Blue Dot Trails to make a 5.4-mile loop that won’t require too much struggle, but will reward you nonetheless with epic views of the river valley, along with peaceful meanderings through trees, along babbling creeks, and past a peaceful pond. 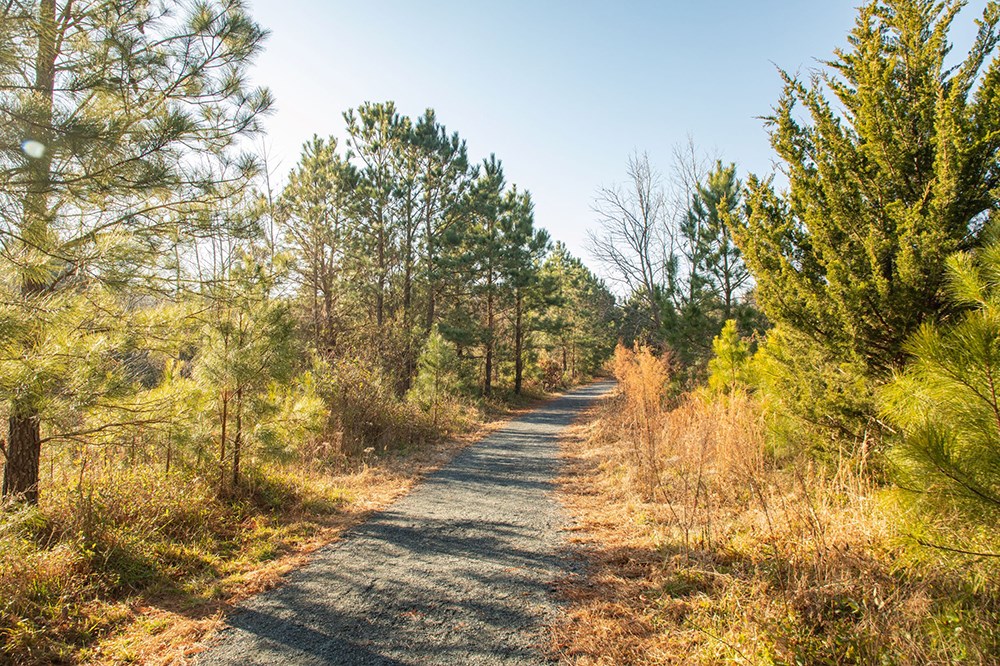 Seeing as the East Coast is lined with stunning beaches across numerous states, you’d be wise to spend some time hiking along the shores, and Delaware’s underrated Seahawk Trail is a haven that’s more than worth your while. Located at Holts Landing State Park in Millville, the trail includes some beachfront terrain, along with forests and meadows, offering the best of both worlds within a short and easy hike. Ideal for summer, it’s a great option for hikers looking to work up a sweat, and then cool off in the ocean.

Hiking to the top of the highest point in Virginia’s Shenandoah National Park may sound daunting, but it’s actually a lot more accessible than it sounds. When driving along Skyline Drive, which weaves through the entire length of the park, there’s a parking area for Hawksbill Gap at the 45.5 mile marker. From here, it’s a short (but admittedly steep) jaunt up to the top of the park’s tallest peak. It’s a lung-burner, but as long as you take your time, you’ll make it up no problem, and it’s worth it for the unparalleled panoramic views of the park, along with the extended Shenandoah Valley, the Virginia Piedmont region, and the Blue Ridge Mountains. Don’t be surprised if you see a few clouds billowing below you — it truly feels like you’re floating in the air from way up here. 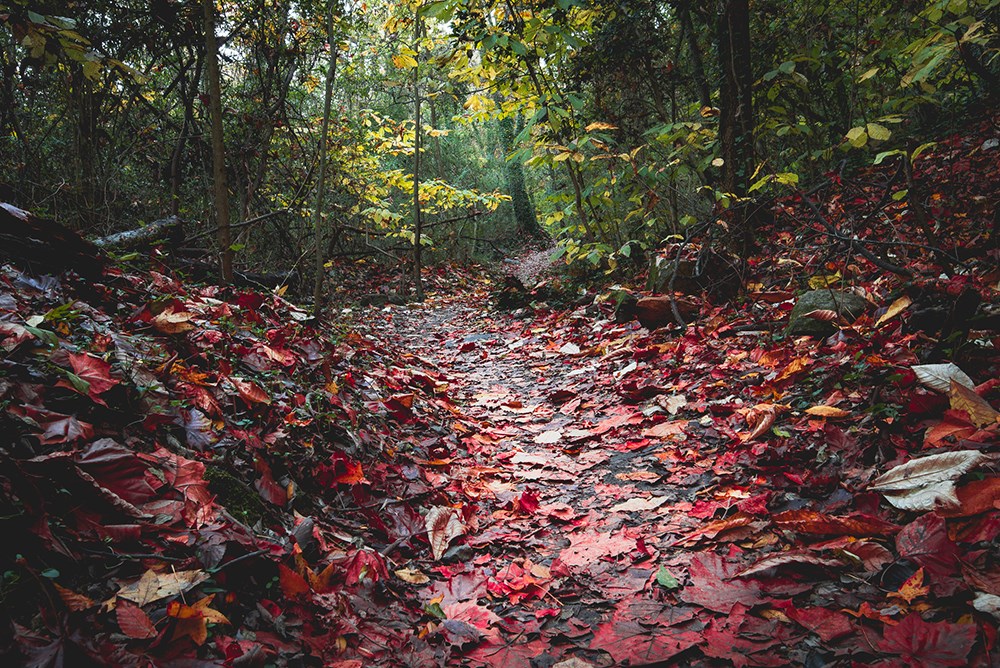 Another good urban trail option is the Buttermilk Loop in Richmond, Virginia. At about 7 miles, it’s more than enough to get your steps in for the day, and just hilly enough to let you feel it. For the most part, the trail hugs the James River on two sides, criss-crossing on two pedestrian bridges to complete the loop. En route, you’ll stroll through Maymont Park, Byrd Park, along and Belle Isle, which offers great views of the downtown Richmond skyline. When it’s hot out, the river is dotted with peaceful pockets for swimming or sunbathing 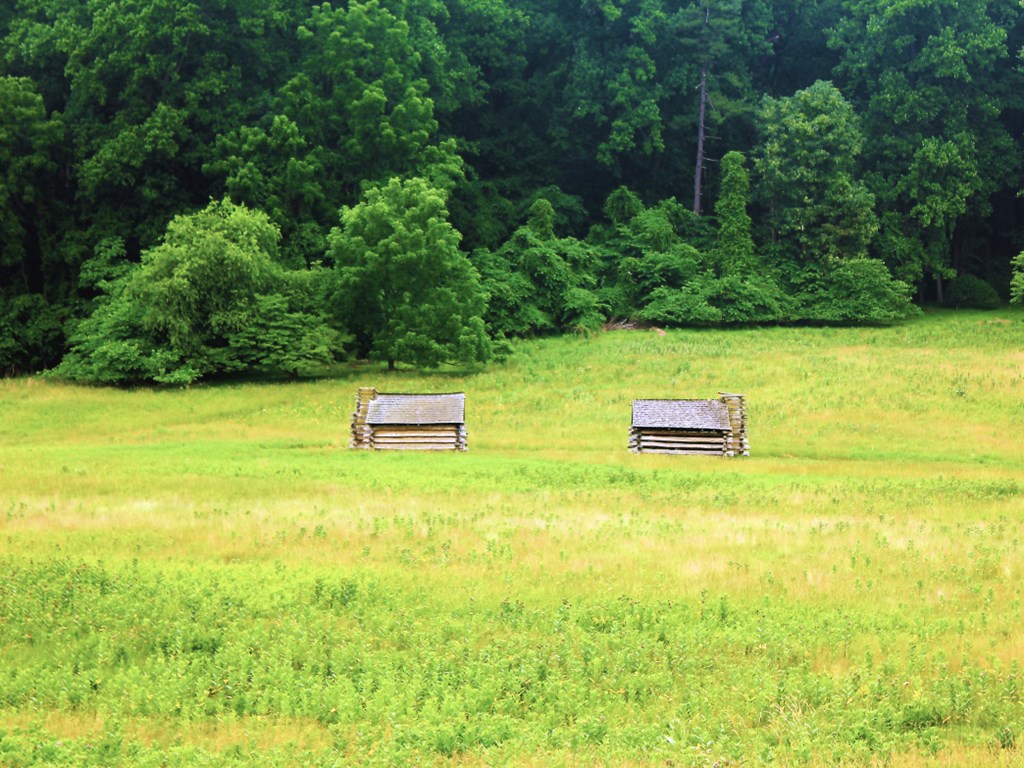 Right up there with The Freedom Trail, the hiking options at Valley Forge National Park in the Philadelphia suburbs are filled with eye-opening American history and Revolutionary artifacts. Chief among these hikes is the Joseph Plumb Martin Trail, the longest route in the park, and one that connects the dots by stopping at almost all of the key historic and interpretive spots in Valley Forge. About 6.5 miles in length, it’s hilly yet mostly easy, getting you up close and personal with the park’s most famed sights, including cannon-filled Artillery Park, the National Memorial Arch, Varnum’s Quarters, and Washington Memorial Chapel. 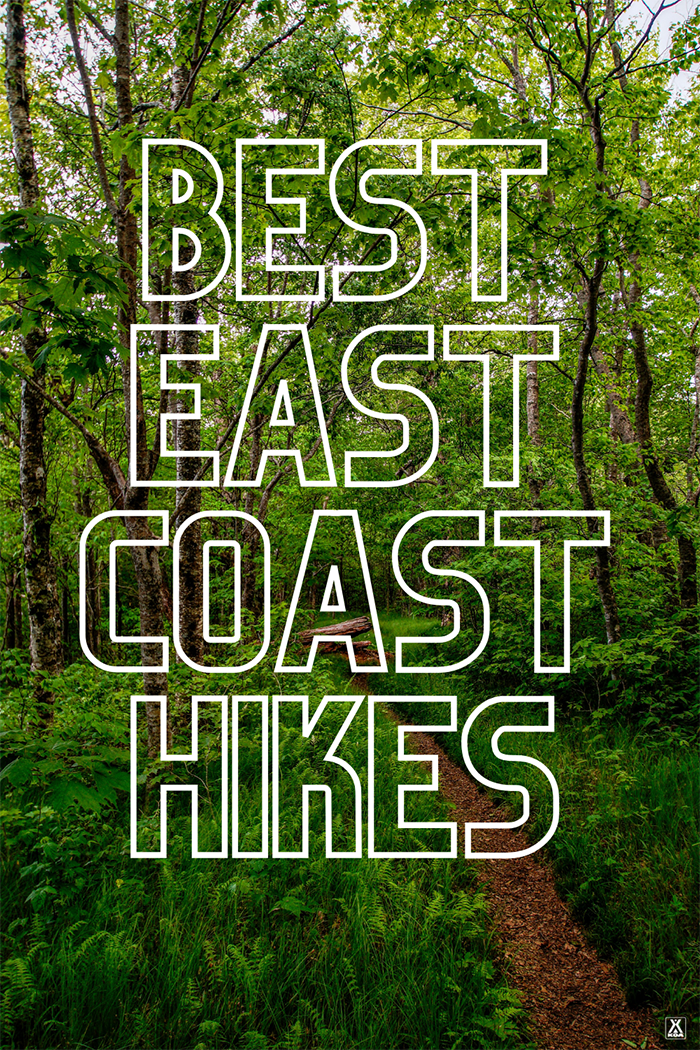