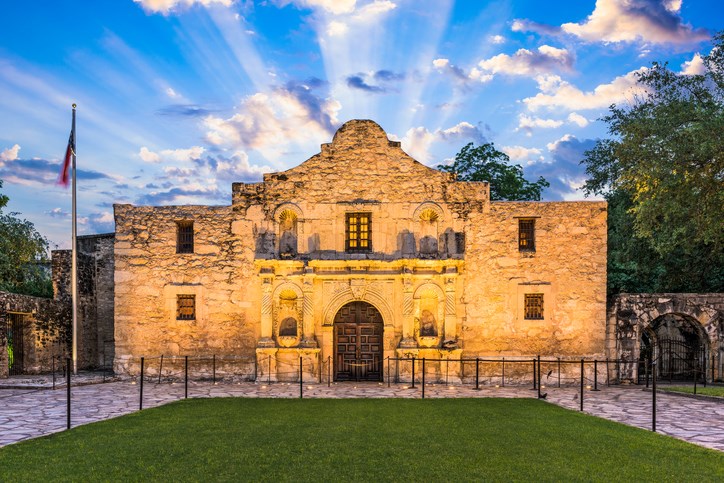 It’s one thing to read about history in books, but to experience it is a completely different story.

Now unfortunately (or maybe fortunately in some cases), there isn’t a way to time travel back to the times when major things happened in the history of the United States, but there is still a way you can experience them today: by visiting where this momentous events occurred.

While the United States is fairly young compared to some parts of the world such as Europe, there is plenty of history we have packed into our nearly 250 years as a country. And some of the remnants of those historical times still remain, and are worth a visit.

So this year, when looking for a unique camping trip to take that will show you some new (to you) spots, consider these top American historical sights.

A Trip Through American History

The history of our country is a rich one, and spreads across the whole country, laying the foundation for a pretty epic road trip.

Here are the sights we think are worth a stop. 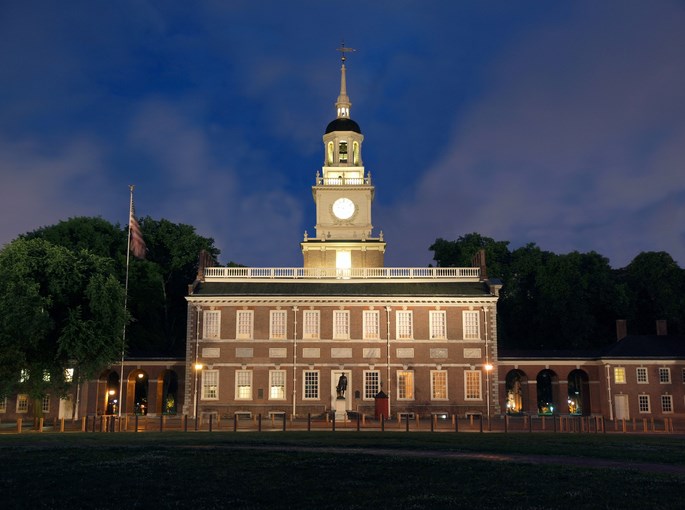 named, Independence Hall is where both the Declaration of Independence and the U.S. Constitution were signed — two documents that changed our country forever.

This UNESCO World Heritage site offers much to see, including the “rising sun” chair where George Washington sat. You’ll find the room arranged to reflect what it looked like during the Constitutional Convention nearly 250 years ago.

You won’t want to miss the West Wing where the inkstand used in the signing of the Declaration of Independence, well, stands, along with an original draft of the Constitution. If that doesn’t scream “history,” I’m not sure what does.

The only way to see Independence Hall is via a tour, and the tour requires reserving a ticket for a specific time during the busy season (March – December).

If you visit outside of the busy season, on Thanksgiving Day, Christmas Eve, Independence Day, of after 5 p.m. during the peak season, you don’t need a ticket.

Tickets are first-come, first-served, or can be reserved in advance here. 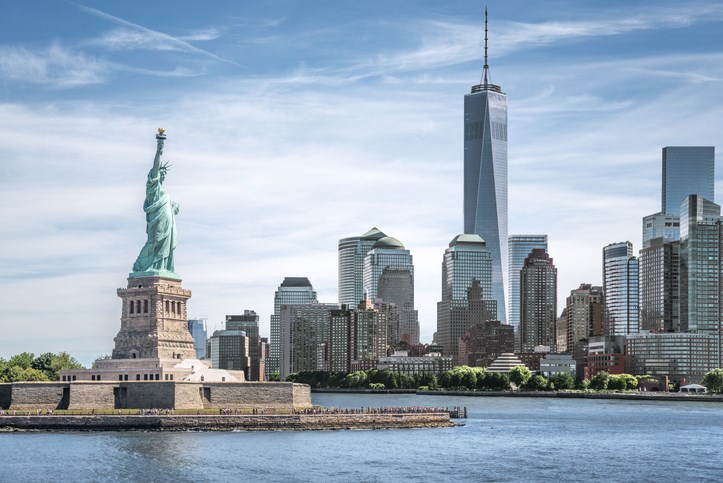 Few people think “America” without picturing the Statue of Liberty. This iconic figure has become part of our identity.

But did you know that the State of Liberty was actually a gift from France? Yes, our European friends gifted this statue to us back in 1886 and since then, it has represented our great nation. It was officially designated a National Monument in 1924.

You can’t miss it — this statue stands at over 300 feet tall. It underwent a major renovation in 1986, in celebration of the centennial of its dedication.

Lady Liberty is one of the most recognizable landmarks, and a true sign of the freedom and democracy that is America.

Liberty Island is open every day except Thanksgiving and Christmas, but access to ferries can be limited due to weather, so be sure to check ferry status ahead of time.

Entrance fee to the monument is free, but the ferry requires purchasing a ticket.

Tickets for the ferry, tours, and crown access are available here. 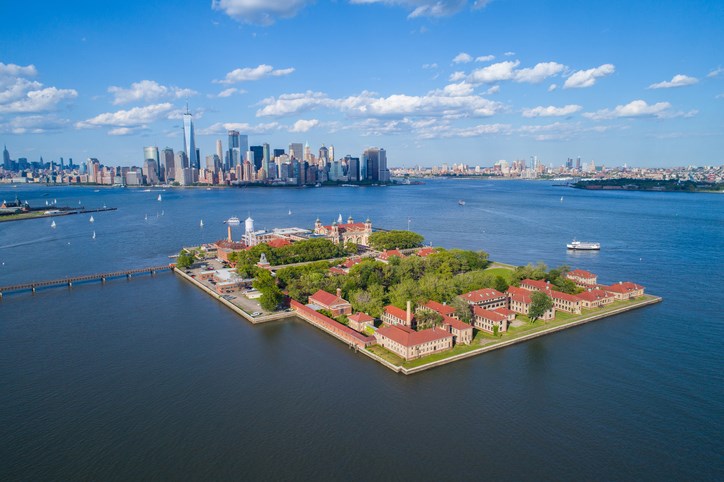 While in the Big Apple, you will also want to hop on over to Ellis Island.

This island is a big part of American history because it was the first piece of United States land that many immigrants stepped foot on. Nicknamed the Gateway to America, this place saw over 12 million immigrants enter through whose descendants today now represent nearly half of the United States’ citizens.

There is a gallery on the island which rotates exhibits relating to the immigrants and their stories of coming to America.

Ellis Island is open every day except Thanksgiving and Christmas, but access to ferries can be limited due to weather, so be sure to check ferry status ahead of time.

Entrance fee to the monument is free, but the ferry requires purchasing a ticket.

Tickets for the ferry, tours, and crown access are available here. 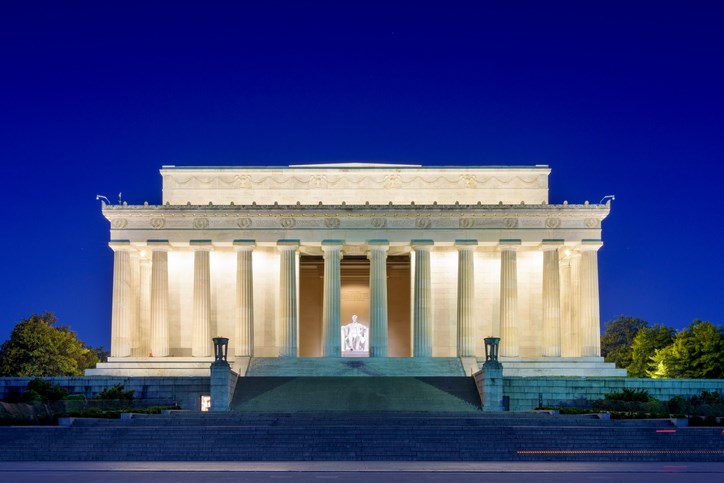 Washington, D.C., as our nation’s capital is a must for your historical sights trip. And while there is much to see in this city that pays homage to our country’s history, we can’t go without mentioning the Lincoln Memorial.

This memorial was built in 1868 to keep the memory of our sixteenth president alive, and was quite a grand way of doing so. It consists of 36 columns — one for each of the states in the United States at the time Lincoln was assassinated. Inside on the wall you will find a favorite Lincoln quote: “In this temple, as in the hearts of the people for whom he saved the Union, the memory of Abraham Lincoln is enshrined forever.”

And near the statue of the great man himself is a speech of Lincoln’s that is one of the most well-known speeches in history: the Gettysburg Address. 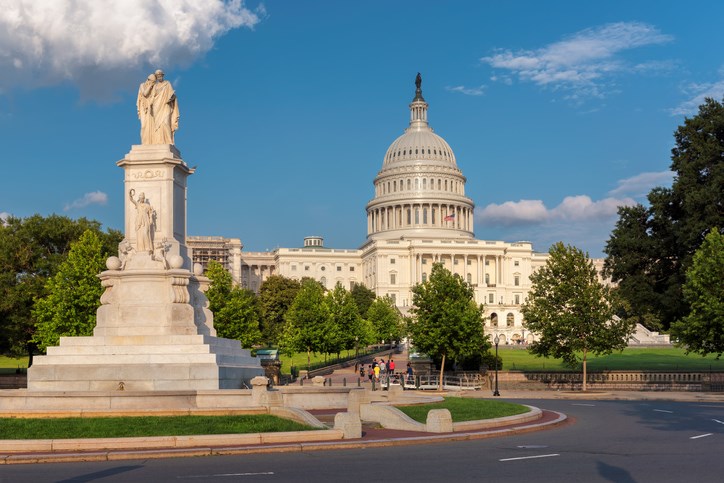 We couldn’t make a list of the top American historical sights to visit without including the U.S. Capitol building and the National Mall. This area is home to a very rich past and what we can predict to be an equally as rich future.

The Mall is a stunning stretch of land that leads up to the U.S. Capitol, which is one of the most well-known sights in the world. Just think about all that happens in there! It was built in 1880 and since then has been expanded to include the iconic dome.

Along the Mall stands great museums full of fabulous art and all that rich history that symbolize America. For over 200 years, the Mall has shared with visitors from all over the world a look into our nation and its monuments and memorials.

The U.S. Capitol Visitor Center is open from 8:30 a.m. to 4:30 p.m. Monday through Saturday every day except Thanksgiving Day, Christmas Day, New Year’s Day, and Inauguration Day. Admission to the visitor center is free but tours require a pass. 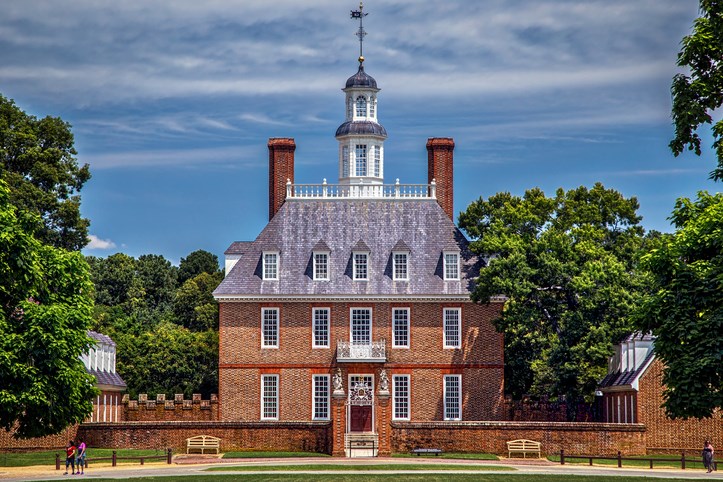 Be sure to stop by one of the four taverns here as well to get a taste (both literal and figurative) of what “grabbing a drink” was like back then.

There are also two world-class art museums in Colonial Williamsburg that you won’t want to miss.

Colonial Williamsburg is open 8:45 a.m. to 5:00 p.m. every day, but please visit website for holiday closures.

Visiting Colonial Williamsburg requires tickets, and tickets can be purchased here. There are a number of different ticket options, from single-day tickets to multi-day passes, and much more. 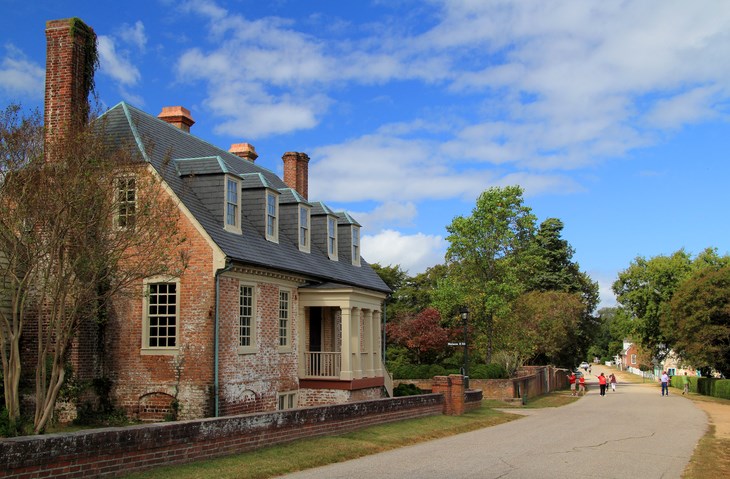 Similar to the concept of Colonial Williamsburg but with a different history behind it is Jamestown Settlement.

The town that has been recreated is home to re-enactments that will take you back in time to when the first permanent English colony was established.

Picture 17th-century Virginia, and you’ll find it here where you can experience it via gallery exhibits and outdoor living history. There are also recreations of the three ships that made the trek from England to this spot back in 1607, and you have the chance to actually climb on board.

The gallery exhibits along with an introductory film will give you a much deeper look into what happened here over 400 years ago, and we guarantee you’ll be amazed.

Visiting Jamestown Settlement requires tickets, and tickets can be purchased here. There are a number of different ticket options, from single-day tickets to multi-day passes, and much more.

The Alamo is a mission and fortress in what is now San Antonio, Texas that played a major role in the history of Texas. It originally was built in the 1700s as a home to the Spanish missionaries, but changed to become a fort for Spanish soldiers.

Here is where the Battle of the Alamo was fought back in 1836. This battle saw the Republic of Texas and Mexico go head-to-head, leaving the Texans in the dust and killing every soldier in the fort, in fact.

The Alamo went on to be used by Confederate forces during the Civil War, and then as a warehouse in the 1870s.

Today it stands as a mark of a vibrant history that shaped Texas and the United States, and one that over 2.5 million people visit per year.

Entrance to the Alamo is free and does not require a ticket. 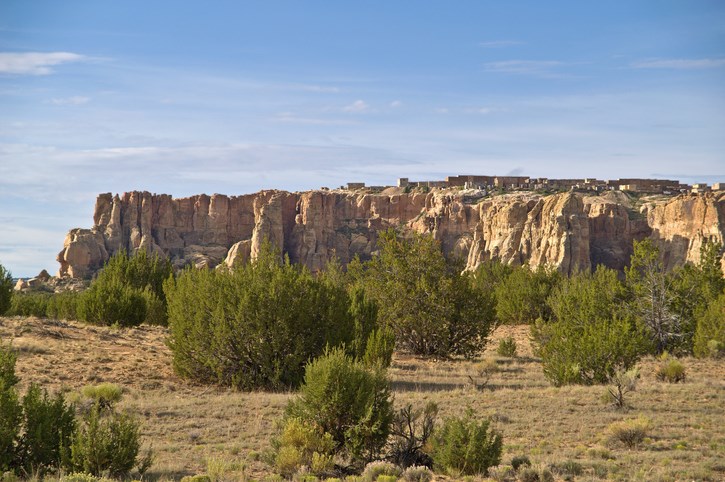 Most of the older U.S. cities we know today are still fairly new and haven’t been inhabited for more than a few hundred years.

However, a place that you might not have heard of gives a whole new definition to the word “old” when it comes to inhabited places in the United States.

Acoma Pueblo is one of the oldest continuously inhabited communities in the United States, and has been home to natives for almost 2,000 years. The Acoma Pueblo tribe consists of nearly 5,000 tribal members, and while most of them do not live in the pueblo full-time, they do spend time here for special occasions and to pay homage to their ancestors.

Visitors get a look into the past on the actual grounds of the pueblo as well as via the Haaku Museum which is home to some stunning exhibits.

Admission does require a ticket, and prices vary (see here). With the price of admission you receive a tour of the grounds. 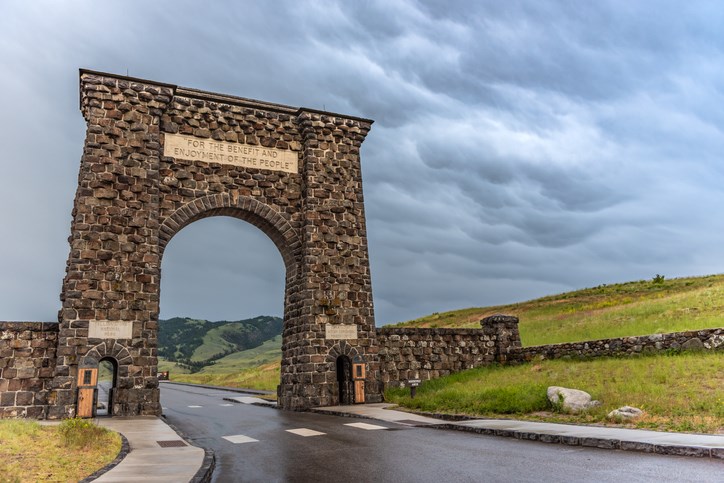 Clearly we are major fans of national parks here at KOA and think all of them are worth visiting, but you may be wondering why we put a national park on this list.

Yellowstone National Park is considered a top American historical site to visit because it was the very first national park to ever exist in not just the United States, but in the entire world. Pretty exciting, right?

Yellowstone really laid the foundation (and set the bar high) for national parks all around the world, and thanks to that, today we have 61 national parks that give travelers from across the globe the experiences of a lifetime.

Beyond that recognition, Yellowstone National Park feels like a step back in time, to a place where the buffalo roam and where the deer and the antelope play. Oh yeah, and also where geysers explode and other hydrothermal features are on display — over 10,000 to give you a rough idea.

An entrance fee is required for admission — you can see the prices here.

There is a lot more history to our country than the list above, but this is a great way to see some of the top American historical sites and find some others in between.

A road trip like this is a great way for both kids and adults to learn more about all the rich history of our country, and find ways to experience the past in the present. 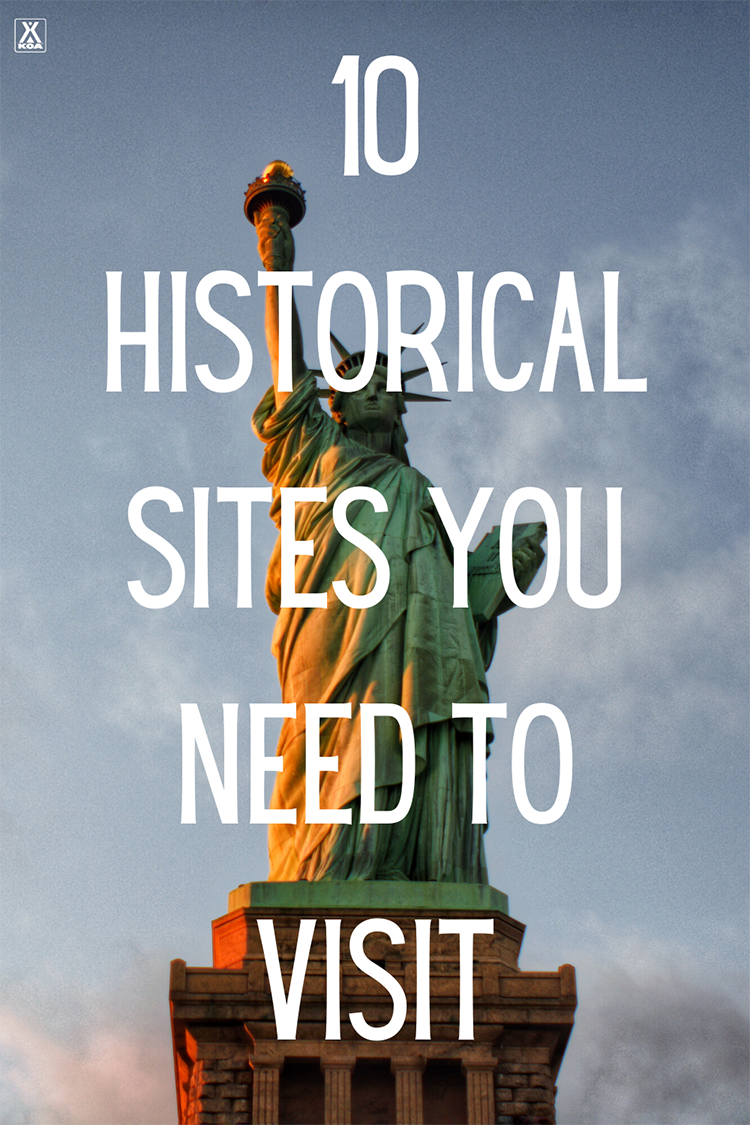