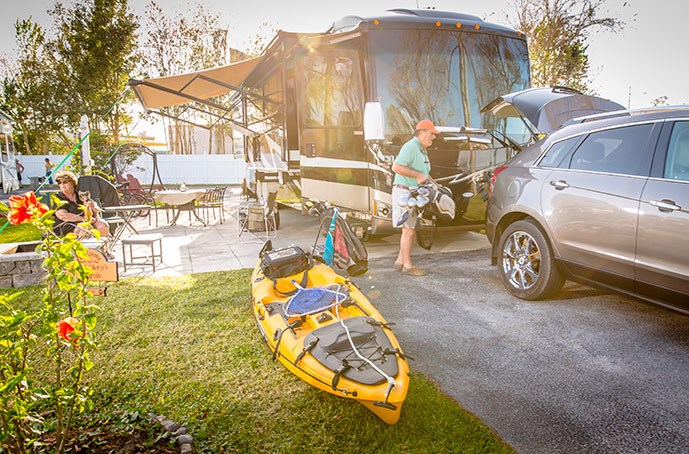 Learn how a 6-month road trip turned into  full-time RVing for one family of RV owners.

It began the way most just-so-crazy-it-might-work ideas do. Jennifer and Deas Nealy were dog owners and frequent travelers who kept running into the same problem. Every time they went out of town—which was often—they would either have to board their Australian Shepherd, German Shepherd, and corgi or tailor their vacation so that they were only staying at dog-friendly hotels. So they had a thought: What if they bought an RV, lived in it with their dogs full-time, and went on vacation forever?

The couple spent the next year researching RVs and attending RV shows before finding a 2010 Tiffin Allegro Red on eBay and buying it sight unseen. They decided to test the water with a six-month trip. Shortly after renting out their home in Grayton Beach, Florida, they hit the road and headed west.

“I think we drove nine hours that first day. We wanted to head west as fast as we could,” says Jennifer. “We had no idea what we were doing. We didn’t make real reservations. We went really, really fast. We’d stop in places for two or three days and then move on.”

What she describes is typical of new full-time RVers who often try to see as many places as quickly as possible.

“You just go, go, go. It’s exhausting. Now we go slower and stay places for a week at a time.”

On that initial six-month trip, the Nealys drove from Florida to Oregon. The couple expected their three dogs to stretch out in the RV and sleep, but the dogs instead chose to stay up front, taking in the changing landscape alongside Jennifer and Deas. The five of them traveled through 11 states, only really lingering along the Oregon coast, where they fell in love with the surprisingly sunny summer weather and crashing waves of the Pacific Ocean.

After that, they headed back to Florida for the winter, but it wasn’t long before they were ready to load up the RV again. This time, they sold their house and embarked on a more permanent road trip of full-time RV living.

For income, the pair relies on occasional real estate investments, though they are currently out of the real estate game and filling in as campground hosts in Florida in exchange for free rent. Their job entails greeting and assisting fellow RVers, keeping an eye on the campground and driving a tram that runs to the beach. They still look at potential real estate opportunities as they travel, but they’re not too eager to invest.

Many full-time RVers—especially millennials—work from the road, thanks to the rise in job opportunities that allow employees to take their careers with them.

“We have a ton of full-time RV friends, and the majority are still working. There are so many jobs available where people work remotely,” says Jennifer.

For full-time RVers who are planning on working remotely, she recommends investing in a good hotspot from a cell service provider, since WiFi isn’t always as reliable as you might hope. Staying at KOA campgrounds that offer internet is also helpful.

Of course, full-time RVing is in large part about spending less time staring at screens and more time exploring the coastlines, mountains, deserts, cities and small towns that define America. When the Nealys first started out as full-time RVers, they took an idealistic approach to travel.

“We’d wake up and say ‘which direction are we going to go?” Jennifer remembers.

Eventually, they learned to make campground reservations in areas that booked up quickly, like Yosemite National Park and Grand Teton National Park. One summer, while traveling the state of Maine, they booked everything months in advance.

“It was stressful doing that,” says Jennifer. “Now we don’t really plan out that much, but I see the advantage in doing it. I don’t have anything planned out in advance for this year.”

The Nealys aren’t quite sure where they’ll head once they leave their campground host position in Florida, but they know what they’ll do when they get there.

“The first thing we do when getting to a new place is get on Yelp and see if there’s a local brewery, and then we go to town, meet local people and drink beer.”

A self-described lifelong Southerner, Jennifer is always surprised by how welcoming people are in every state.

“It’s not just the South that has the market on being friendly,” she says. “We’ve met so many nice people that we keep in touch with. It’s like we have friends all over the country.”

Life on the road can often get lonely, even for couples or families who travel together. Committing to the full-time RV lifestyle often means forgoing a sense of community, missing out on family events and waking up every day in a new, unfamiliar place. For the Nealys, this is the greatest challenge of full-time RVing. To cope, they’ve built a network of friends on the road, most of whom they met through the growing community of full-time RV lifestyle bloggers. Jennifer started the couple’s blog Nealys on Wheels to join this sort of makeshift social network. The pair began to make connections with other full-time RVers through their blog and through Instagram.

“I wanted our name out there so we could make connections with other people who are blogging,” Jennifer says. “You start following people back and forth and you notice you’re in the same area.”

This past summer, those online friendships led to a group of 15 full-time RVers meeting up in Stanley, Idaho to watch the eclipse. They camped within view of the jagged Sawtooth Mountains, awaiting that moment when the moon lined up with the sun along the path of totality.

“For three weeks, it was just us,” says Jennifer. “That was awesome.”

When asked what advice she’d give to anyone considering RVing full-time, she mentions the word balance. In the life of a full-time RVer, balance means a number of things. It means researching and planning, but it also means driving west with no other goal than to see the surf of the Pacific. It means camping in cities and drinking beer in crowded breweries, but it also means spending weeks alone in Montana, camping on the outskirts of Glacier National Park amongst the fields of beargrass and turquoise lakes. Mostly, it means embracing a life defined by travel, even if other real-world problems like finding a doctor and sticking to a budget do arise.

For the Nealys, the pros—ever-changing scenery, freedom and the feeling of being a citizen of everywhere rather than one place—far outweigh the challenges of full-time RVing.

“You don’t realize how big this country is until you start driving it,” says Jennifer. “I don’t think we’ll ever stop completely. Even if we don’t do it forever, travel will always be a part of our lives.”

Written by Krista Diamond for RootsRated in partnership with Kampgrounds of America. 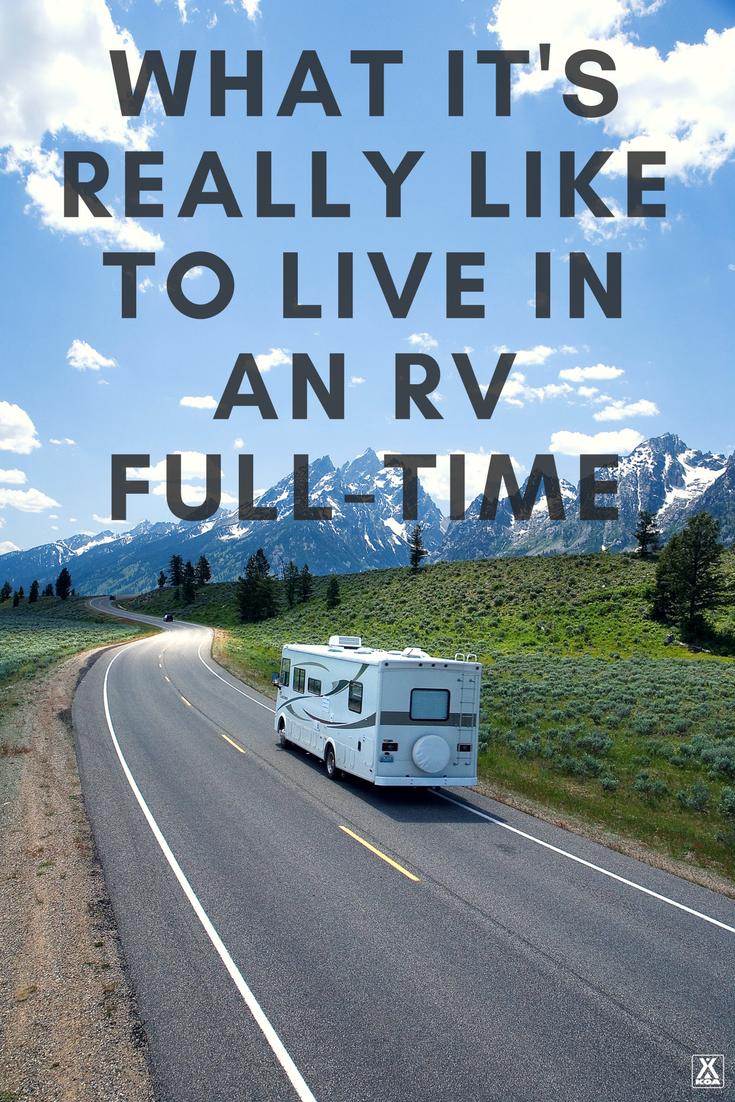