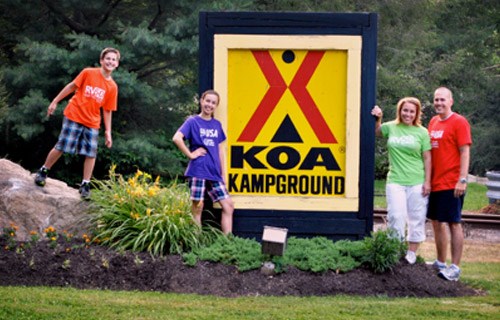 Potholes and planning, maintenance and memories, fuel and fun. Sometimes the details of RVing can seem overwhelming for the beginning camper. But the freedom of the open road and the greatness of America still beckon. Recently, our family of four began a journey that will allow us to visit all 50 states over the next 13 months. We left South Florida on June 10, 2012, towing our 38-foot fifth wheel, and don’t expect to return to the Sunshine State until July 2013. So far, 3,300 miles have taken us to eight states, from Delaware to Massachusetts, providing a wealth of experience in just over one month. As beginning full-time RVers, here are a few of the early lessons that we’ve learned.

Take Time to Smell the Roses. Early in our trip, we planned day-after-day of sightseeing opportunities with a rest day or two thrown in as an afterthought. We sometimes cancelled planned rest to add must-see attractions to our agenda. The result of our go-go attitude was exhaustion. We simply could not maintain that pace for an entire year.

The solution to our fatigue was a simple one. Focusing only on major highlights in every state, we now enjoy more days in-camp. Initially, we thought this lack of activity might bore our 13-year-old Kristi and 11-year-old Kyle. On the contrary, they’ve flourished, discovering activities at each campground we’ve visited. At Philadelphia/West Chester KOA, we rented a canoe and enjoyed a peaceful morning on the Brandywine River. We floated by flocks of Canadian geese, saw a passing train and enjoyed each other’s company. Kyle loved Mystic KOA’s four-wheel off-road bikes and spent hours circling the campground. At night, the fun continued with KOA-organized games of manhunt and karaoke with other campers. Boston/Cape Cod KOA offered many family activities including s’more roasts, miniature golf, a bounce pillow, fun train and a refreshing pool. We’ve learned that some of the best days are ones that we don’t leave camp at all.

Get Directions From a Local. At the beginning of our journey, we relied heavily on GPS to move our rig from one location to another. Many times, our automatic navigator led us into difficulty. For example, the direct route from Dover (DE) to Philadelphia landed us smack dab in the middle of one of the smallest town squares in Eastern Pennsylvania. We quickly diverted to the town’s truck route only to face another impossible turn. With traffic backing up behind us and our nerves frayed, we were forced to stop oncoming traffic to allow the wide turns necessary to miss a historic building or two and continue on our way.

Again, the solution to our problem was an easy one. We now call ahead for big rig friendly directions — or if we’re headed to a KOA, we follow the best route printed in the 2012 KOA Directory. We’ve also found that each KOA we’ve visited has preprinted directions for traveling to local attractions. This local knowledge was particularly helpful in Boston, where we used the subway near the campground to hear the Boston Pops and watch some of the best Fourth of July fireworks in the country with a crowd of 500,000, without getting stuck in Beantown’s famous traffic.

Reserve Early for Full Hookups and Pull Through Sites. In addition to a tendency to get our rather large rig into some uncomfortably tight spaces; as beginning RVers, we’ve struggled to back 38 feet of fifth wheel into tight campsites. On one of our first outings at a world-renowned Florida campground, it took an eternity to get our RV into its final resting place. Our experience was so bad that it almost single-handedly derailed our plans for a nationwide journey. Narrow roads complete with parallel parked cars demanded one and a half hours, three loops of the campground, an unhitching-hitching maneuver, multiple campsites, nerves of steel, and encouragement from an audience of 25 of our soon-to-be-neighbors — before our fifth wheel was awkwardly angled in its lot. To get there, our rig narrowly avoided hitting a $200,000 motor home, brushed low hanging tree branches and almost jackknifed.

Due to this experience, we place a high premium on pull through sites. These sites usually include 50-amp power and full hookups as an additional bonus. As such, they are often in high demand, particularly during peak seasons. So, we’ve booked reservations well into our summer in New England and the Mid-Atlantic states to avoid dump stations, running only one of our rig’s two air conditioners and unnecessary backing adventures.

Clean Bathrooms Make Everyone Happy. Let’s face it. RV showers are, at best, below average in their effectiveness against the typical dirt and grime of a day of family camping. They are cramped, prone to low water pressure and, in our case, can vary in temperature from scalding to teeth-chattering. And with only one shower for our family of four, the bathroom line can last a while. There are also times when a spicy restaurant meal or an extra campfire s’more can overwhelm our RV’s toilets in unmentionable ways. In such cases, a clean campground bathroom is a true necessity.

A necessity, but not always a reality. In our first month, we have faced campground restrooms with smells ranging from unpleasant to the manure pit on our grandfather’s farm, showers lacking hot water and employing extreme water rationing techniques, and too many bug and spider colonies to count. In Jersey City (NJ), a non-KOA location, the restrooms were so bad that our children sometimes showered outside, in their bathing suits, with a garden hose.

Happily, we can always rely on KOA for a clean shower or toilet when the need arises. In particular, our award for best campground restroom goes to Philadelphia/West Chester KOA. With private showers and squeaky-clean floors and toilets, even during a busy Father’s Day weekend, owner Gary Levesque and his team have earned this special recognition from our grateful family.

First-time RVers Randy and Heidi Martin and their children, Kristi and Kyle, plan to visit all 50 states by July 2013. Okay, they’ll actually fly to Hawaii and Alaska, but that’s still a lot of driving (40,000 miles, give or take). More information about their trip of a lifetime and their family’s blogs are available at www.thattripusa.com.