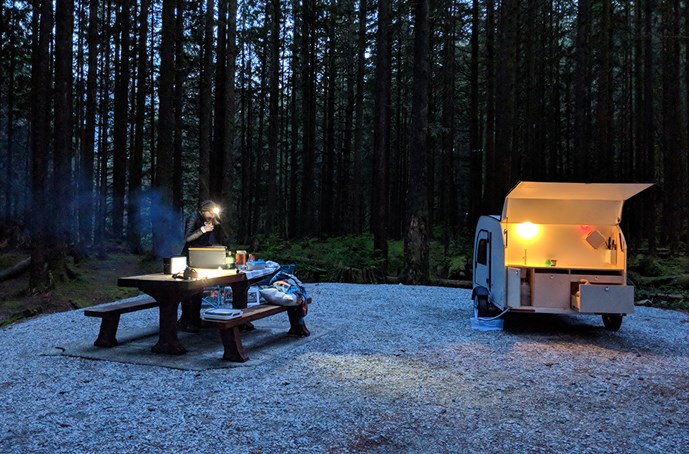 If you’ve found yourself at a campground recently you’ve probably seen a teardrop trailer. Learn more about this compact RV alternatives and check out some totally cool teardrop trailers.

Truman presides in the oval office, families are welcoming WWII veterans back home and drivers are pumping gas for $.15/gallon. The late 1940s also saw more teardrops traveling along America’s interstates. “Teardrops have been around since the very early ‘30s, but the heydays were from right after WWII through the ‘50s,” says Grant Whipp—founder of the newsletter “Tales & Trails – The Teardrop Times.” Interest in these egg-shaped campers that sold for as little as $500 waned in the ‘60s and ‘70s. But teardrops slowly came back in style starting in the ‘80s and ‘90s. 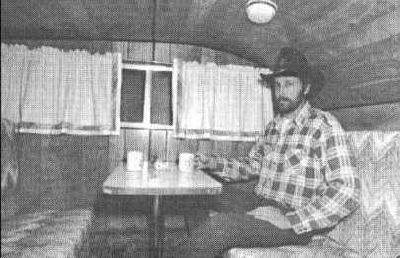 Today, thanks to the tiny living trend and a recent boom in manufacturing, we’re experiencing an unprecedented teardrop revival. Some of these RVs are so light they can be pulled with ATVs. Others are being outfitted to become mobile money-makers. In case you’re interested in investing in a piece of nostalgia, or are simply in the market for a compact, contemporary camper, here are a few eye-catching teardrops and insight from their owners. Fun fact: teardrop owners refer to other RVs as “standys” because you can stand up in them without hitting your head. 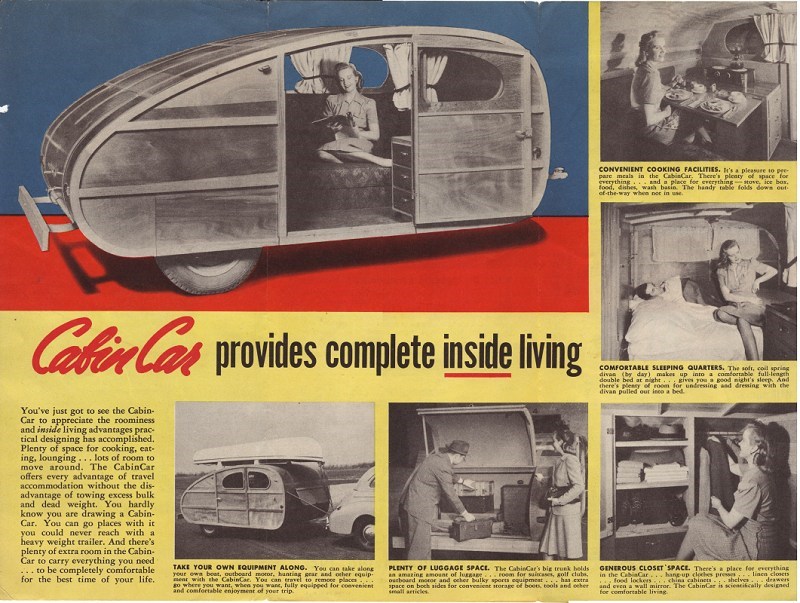 Whipp calls the wooden Cabin Car the “holy grail of teardrops” for teardrop enthusiasts. He explains that it was built by Fleet Aircraft Co.’s RV division in Ontario, Canada. Fleet Aircraft operated from 1928-1957, and these campers were made during the late 1940s. Your best bet of seeing a Cabin Car is in person, at a teardrop meetup. Before retiring in 2015, Whipp ran the website, Teardrops.net which advertised more than 100 teardrop gatherings each year. There were even a few international teardrop rendezvous. “Nearly all current vintage trailer rallies have their roots in teardrop gatherings,” says Whipp. “They did not exist until well after we’d started having our get-togethers.” 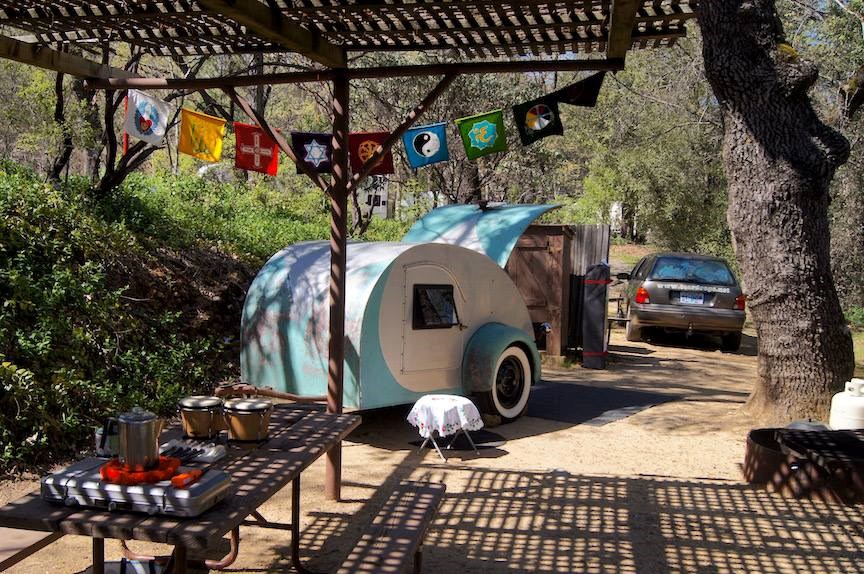 Whipp and his wife, Kay—who manages one of the biggest teardrop Facebook groups—currently own an original 1947 KIT Kamper Deluxe. They also have several teardrop works in progress. While running his company, Li’l Bear Tag-Alongs, from 1984 through 2015, Whipp personally built 39 teardrops. His advice to first-time teardrop owners? “Teardrops garner a LOT of attention wherever they go and people come up to you with questions, LOTS of questions,” explains Whipp. “Some are downright silly and sometimes hilarious, so you need to be prepared!” (He says the best owners are gregarious, easy-going people persons.) 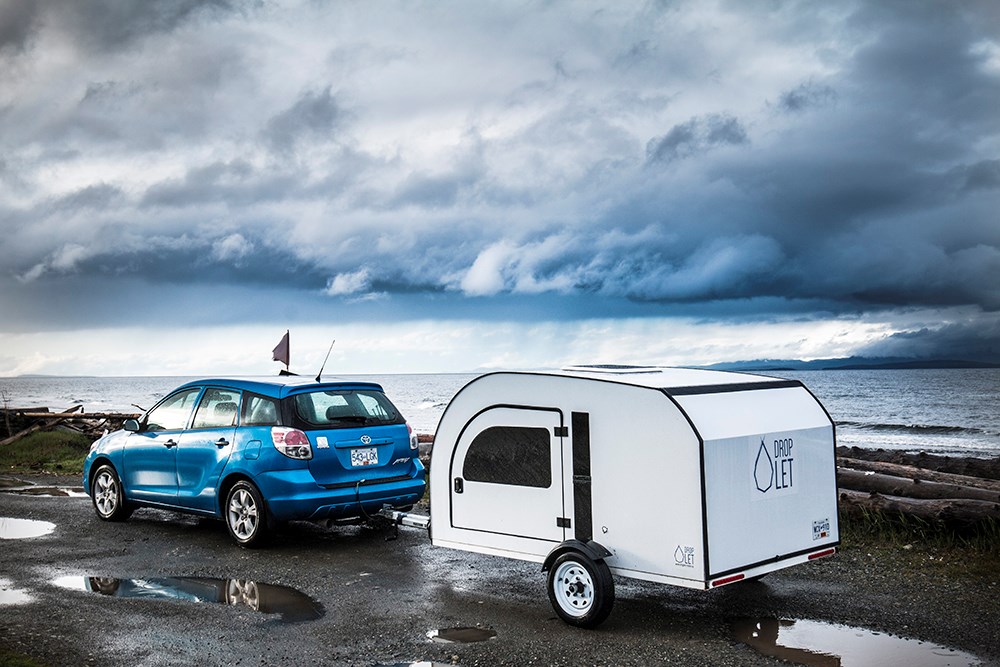 “My girlfriend and I used to book the little cabins at KOA,” says Pascal Pillon. “Now we just bring the cabin with us.” The eco-conscious Vancouver-based couple created DROPLET after not being able to find a trailer light enough to be towed by their Toyota Matrix (not a gas guzzler) that was also “simple, bright and spacious.” Pillon is an engineer and his girlfriend, an interior designer, so DROPLET marries function with form. DROPLET 58 is currently their best-selling model. It’s 5 feet wide, 8 feet long and only 950 pounds. The couple rents and sells them. They’ve even had success listing DROPLET on AirBnB. 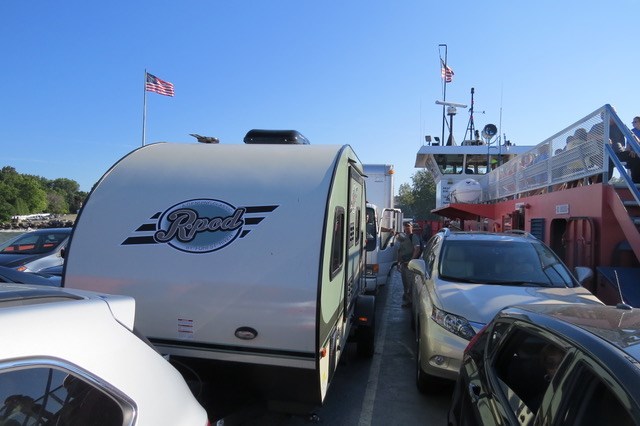 Chez, a Cincinnati-based travel writer, says his family named their rig the “Port-a-Poddy.” His family has always camped, but their 2016 R-Pod 182G is their first teardrop trailer. So far, they’ve camped in Ohio, Indiana, Michigan and Kentucky. Chez says his favorite part of this model is the “G” which stands for garage. “The garage is the great space in the back which is almost like a kitchen/entertainment center.” If you’re a first-time teardrop owner like him, he recommends joining teardrop trailer groups on social media. And if there’s not one in your area, start one! 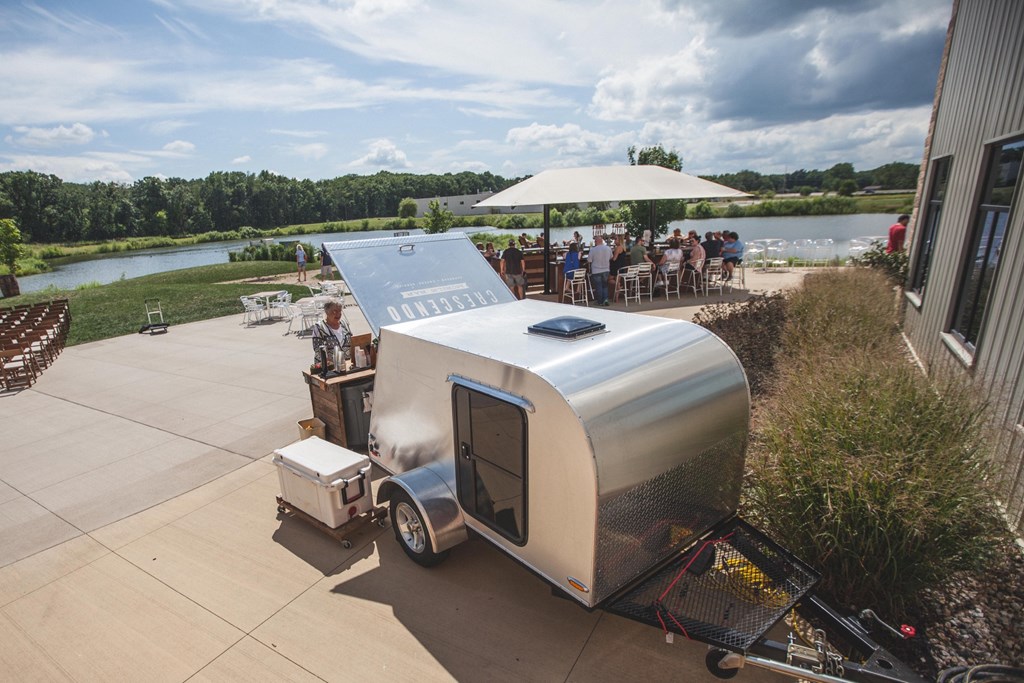 Whether your caffeine fix comes from an espresso, pour-over or a nitro cold press, Crescendo Mobile Bar has you covered. Yes, this custom teardrop trailer comes with its own barista. “We purchased our trailer from RetroRides,” says Crescendo’s owner Cait Sirianni who also owns the brick-and-mortar Crescendo Espresso Bar + Music Café in Madison, Wisconsin. Sirianni had them build her trailer with a larger kitchen so it could accommodate all the coffee equipment. Since 2015, Crescendo Mobile Bar has traveled all over the state, catering corporate events and weddings. 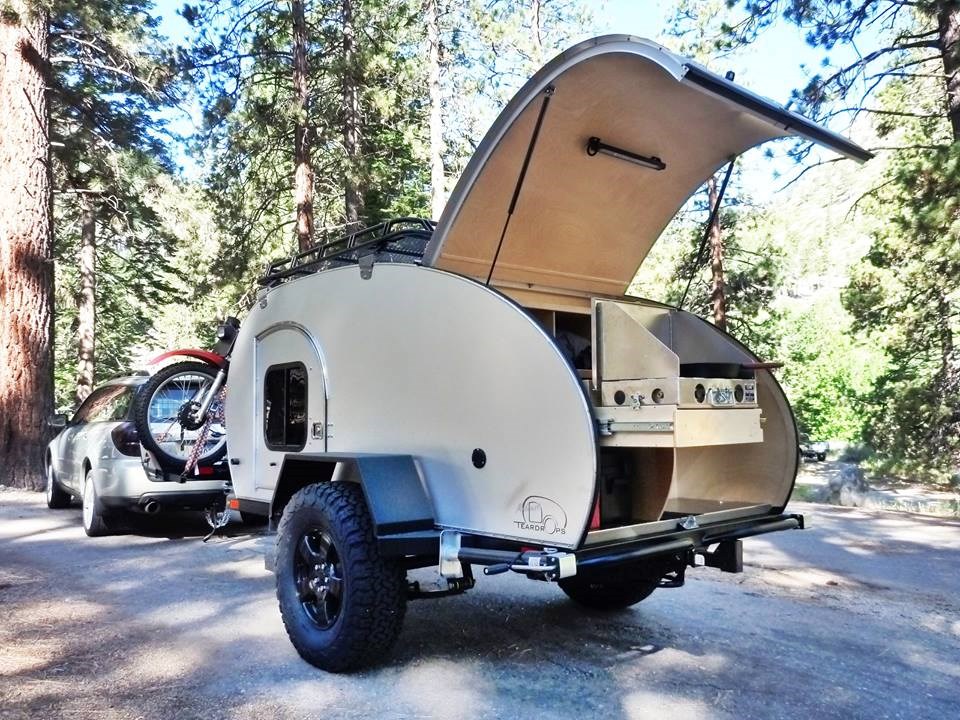 What’s the best part about owning a teardrop trailer? “It takes about five minutes to level the camper, put out the awning and chairs and grab a frosty beverage,” says Bryan Kreiter. Along with his wife Tracy, Kreiter owns Midwest Teardrops located in Owatonna, Minnesota. They manufacture So-Cal Teardrops which include models like the Sierra—large enough for a queen-sized bed but light enough to pull with any car—the Kascade—a crossover model that can go on and off road—and the Krawler—an off-road model that knows few limits when it comes to terrain. Midwest Teardrops’ models start around $12,000 and go up to $18,000. 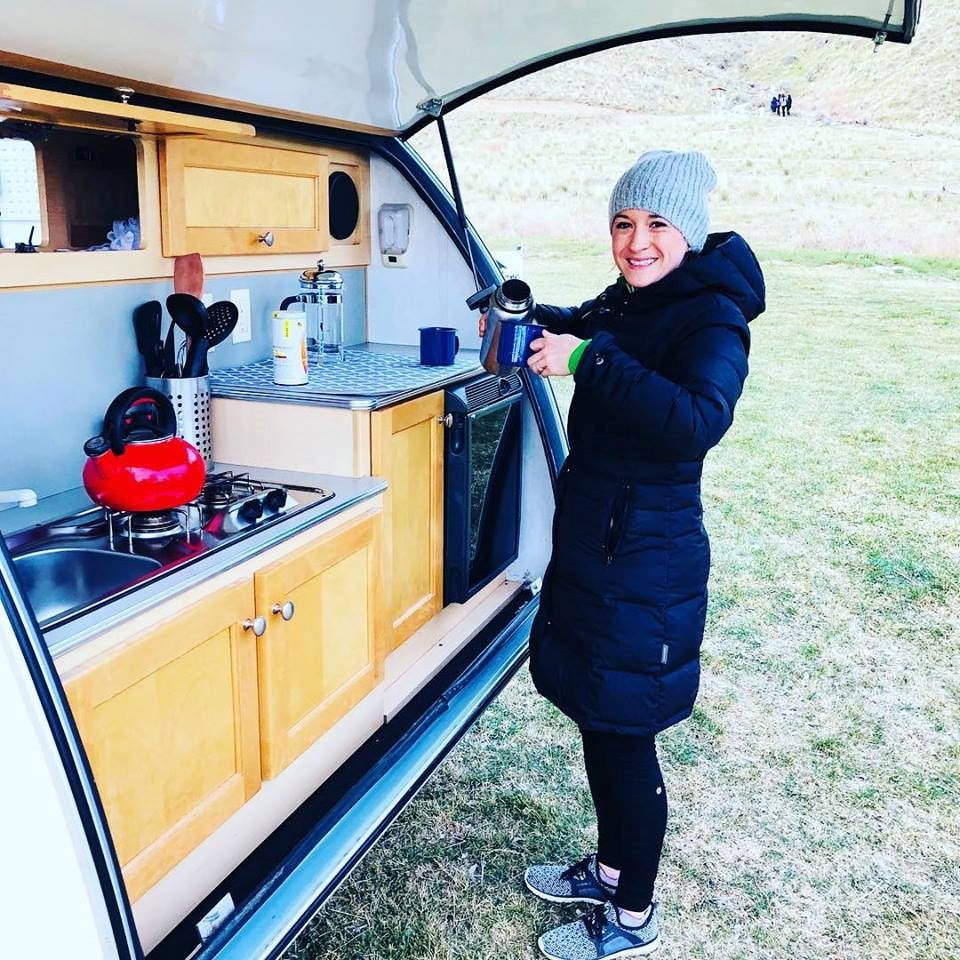 Jay and Dana Cadwell bought their first teardrop in 2014. That first year they used it on the weekends, exploring their backyard, the Pacific Northwest. But then they were able to take off for a four-month sabbatical where they spent more than 120 nights in their [email protected] Teardrop and visited more than a dozen national parks. Those adventures and a love for the simple life inspired them to start Explore More Northwest. Based in Kennewick, Washington, they currently have a fleet of five fully-stocked (there’s even a French press) teardrops that rent for between $80-$125/night. 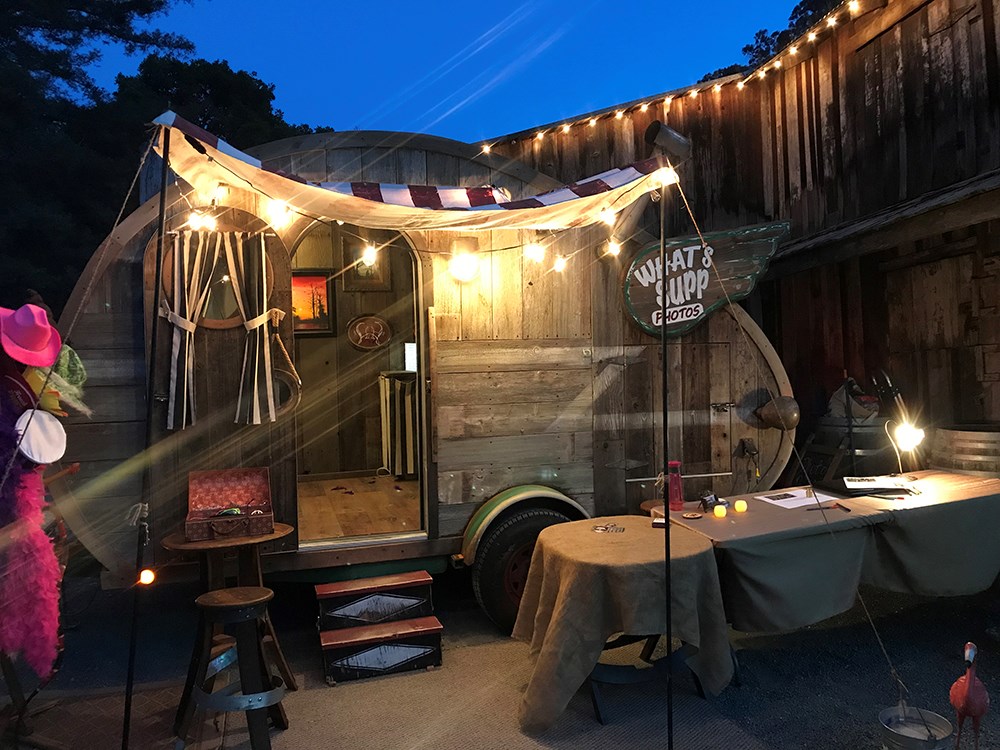 Dolores, as she’s lovingly referred to, was born on St. Patrick’s Day, 2017. Since then, she’s been a hit at parties, festivals, corporate events and weddings all over her home state of California. In fact, she’s already booked for events taking place in 2019! Dolores’s owners, got the idea for WhatsUpPhotos while planning their own wedding. “We came across a trailer which was a photo booth,” says Debbie Supp whose husband Paul has always loved photography. The Supps wanted something unique so they had Dolores custom built from the ground up. She’s fully automated—taking and printing photos in a matter of seconds. 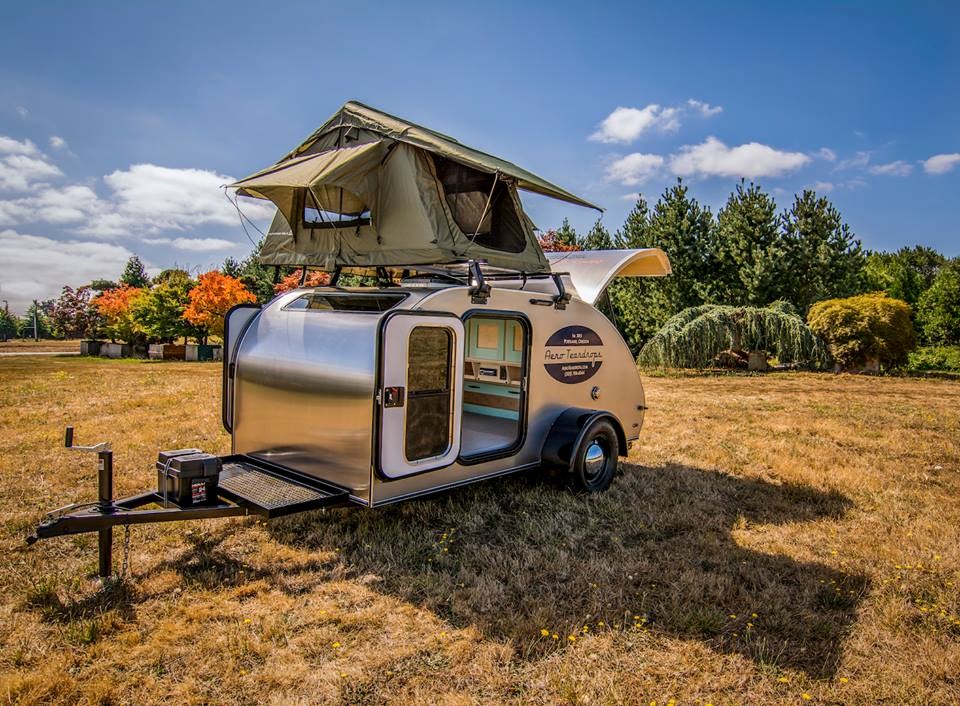 If you’re in the market for a teardrop that is family-friendly and quality enough to become an heirloom, check out Aero Teardrops. This family-owned manufacturer, founded in Oregon in 2015, handcrafts each trailer and intentionally produces a limited quantity. That’s how it can pride itself on details like Bluetooth speakers, USB ports, LED reading lights and cabinets that can be converted into bunkbeds. Models range from $12,000 for the 5 x 8 ft. Broadway to $14,500 for the Steel 5 x 10 ft. high clearance package. Of course, you can also use their trailer builder tool to design the teardrop of your dreams. 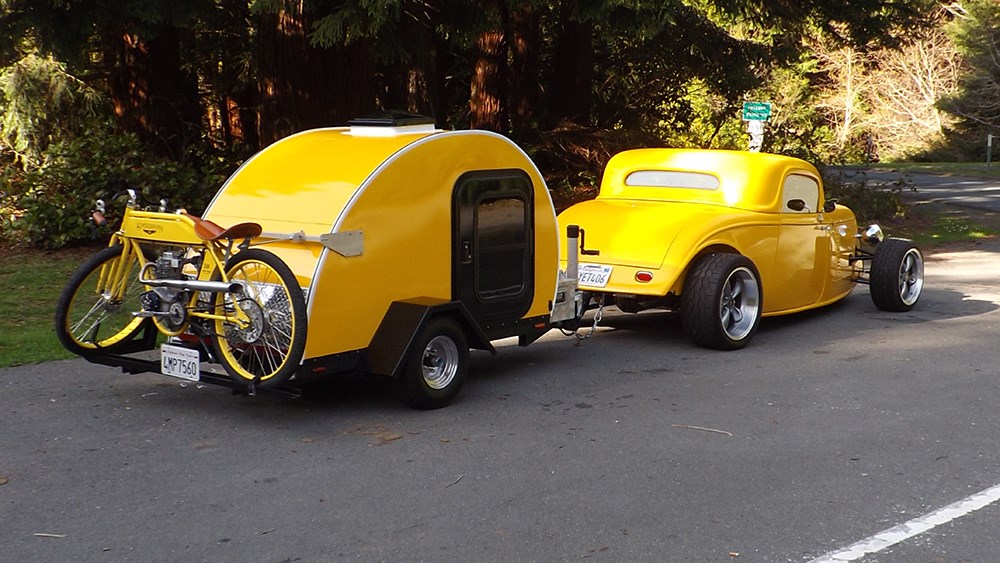 With prices starting at $4,750, American Teardrop offers some of the most affordable new teardrops on the market. The Auburn, California-based manufacturer also rents their trailers—which come in seven different models, most named for birds of prey—for as little as $75/night. In a 2015 interview, American Teardrop owner Bud Hausman told Trailer Life that teardrop trailers are not RVs. “They’re a lifestyle.” 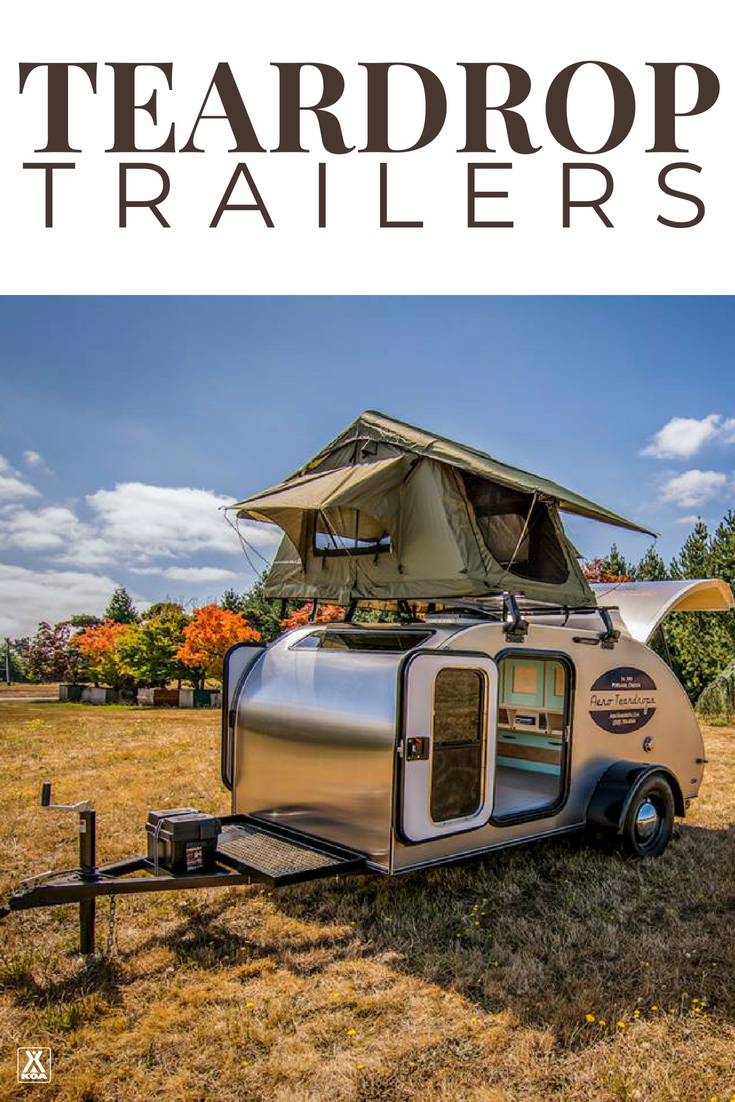