Login
Choose Blog Category:
RV Advice
Simple and Easy, Traveling Tiny May Very Well Be the Highway to Happiness We All Seek 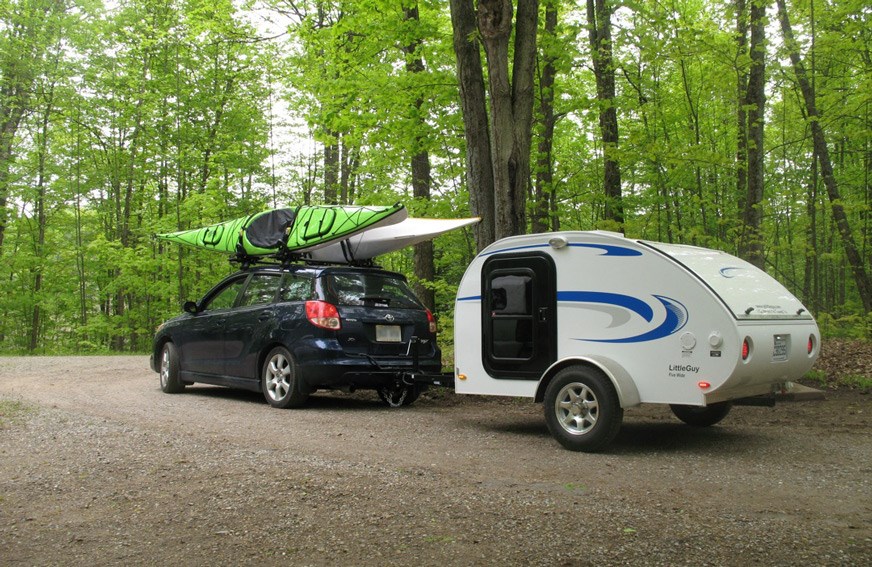 Simple and easy, traveling tiny may very well be the highway to happiness we all seek.

My husband and I live in a small apartment in New York City. So we’re used to surviving in little spaces.

Tiny! describes the way we camp, too. Our frequent trips to the country are perfect escapes from the hectic city, so we travel light and make quick get-aways.

The simplicity of tiny traveling has been on my mind ever since I spoke with a KOA owner from Wyoming who told me this story: He woke early one morning and saw a farmer’s lady and her husband, as he described them, who had never had a vacation their whole lives. They were just sitting out there, he said. The happiest people he’d ever seen. Six in the morning. Having coffee out of the back of their teardrop. She was 100 percent happy. The guy, also.

Simple and easy, traveling tiny may very well be the highway to happiness we all seek. I wanted to know more about that little teardrop trailer where you can sleep, eat, sip a cuppa coffee and become instantly carefree and happy.

Teardrops are lightweight little trailers that are aerodynamic (shaped like tears falling from our eyes, I guess) and are easily hauled by almost any size car. They are usually just big enough for a bed and assorted supplies in their cabin plus an outside kitchen galley and storage space.

For me, teardrops are a giant step up from our tent and several rungs below the fully equipped RVs that look cozy in the middle of a rainstorm. They’ve been around for decades but contemporary models are suddenly more appealing in today’s greener world.

They come in multi colors, unique patterns and assorted materials. Most are factory made, but some have been built from scratch and personalized by loyal owners. What they have in common is that they are all incredibly cute. 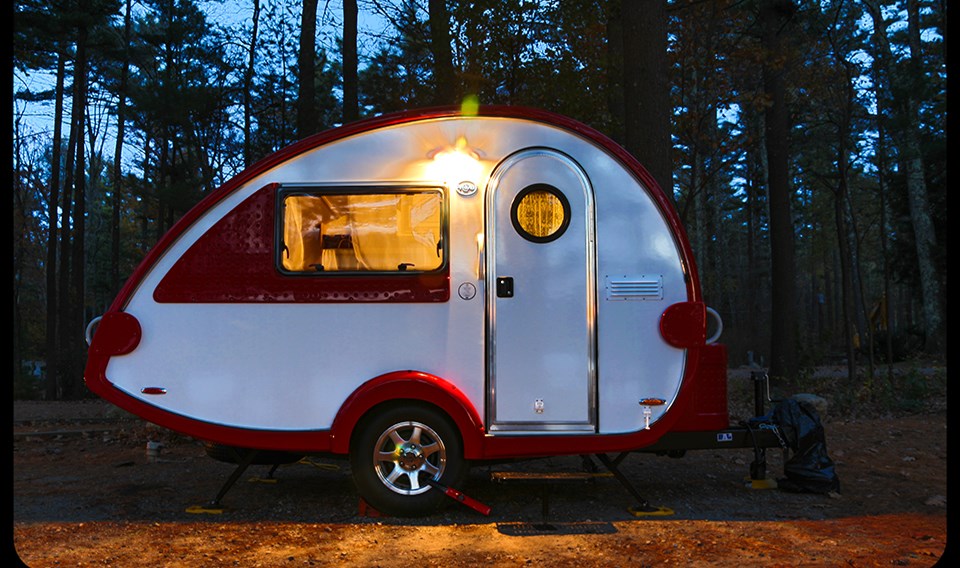 Teardrop owners are inspired by the lure of the open road but, for them, minimalism is key. Two epic travelers who choose tiny over grand are Jason Seavey and Nick Harrison. They live in different parts of America and have diverse lifestyles. Their common bond is KOA.

For each, traveling tiny helped fulfill their love of adventure. Between them they’ve covered more than 20,000 miles. Not so tiny, huh?

You should understand in advance that I’m partial to tiny living, in general. Most of my family’s camping is done in a tent that’s small enough to store in our stuffed closet at home and then load into the back of our compact car. Our gear always folds down to Lilliputian size and expands to laughable proportions. This method has worked wonders for us in campgrounds all over America and Europe, as well.

Our city friends, especially the non-campers, live even tinier on a daily basis. Some have made an art form out of living large in less than 300 square feet. Picture one friend’s tiny penthouse studio not far from the United Nations where dinner parties for 8 have been routine. Getting a glimpse of Manhattan’s East River is a matter of looking out from the cutest little terrace you’ve ever imagined. You may have seen her neighbor’s apartment on TV, so small that Oprah Winfrey featured it on her show.

So I know TINY when I see it.

The first teardrop my husband and I spotted was at the Devil’s Tower KOA in Wyoming. It was simply adorable positioned, homestead style, in view of the famous monument where “Close Encounters of The Third Kind” was filmed. Jason was cooking up something spectacular in cast iron cookware, surrounded by neighboring teardrop-admirers. I wrote down his contact info in my reporter’s notebook figuring that eventually I’d want to write about him. That was back in 2011.

He had just arrived with his dog Odin, a Catahoula Leopard Dog, who he named after a Norse God. Jason is one of those engaging guys whose friendliness is contagious. A former Marine, he had recently sold his house in New Hampshire, built this teardrop from scratch and was taking time out from a demanding cooking career to see the USA, tiny style, in a year-long travel adventure.

The day after we met him, he joined the KOA staff for a temporary stint.

Jason’s teardrop was the height of minimalism and Marine preparedness. He showed us how he built a frame on a utility trailer, put a twin size bed with storage in the cabin, added solar panels, security mirrors and an exhaust fan. The stand-out feature was his fully-stocked kitchen with a refrigerator, all kinds of cooking utensils, a water purification system, even a pull-out drawer to house an exotic supply of spices. 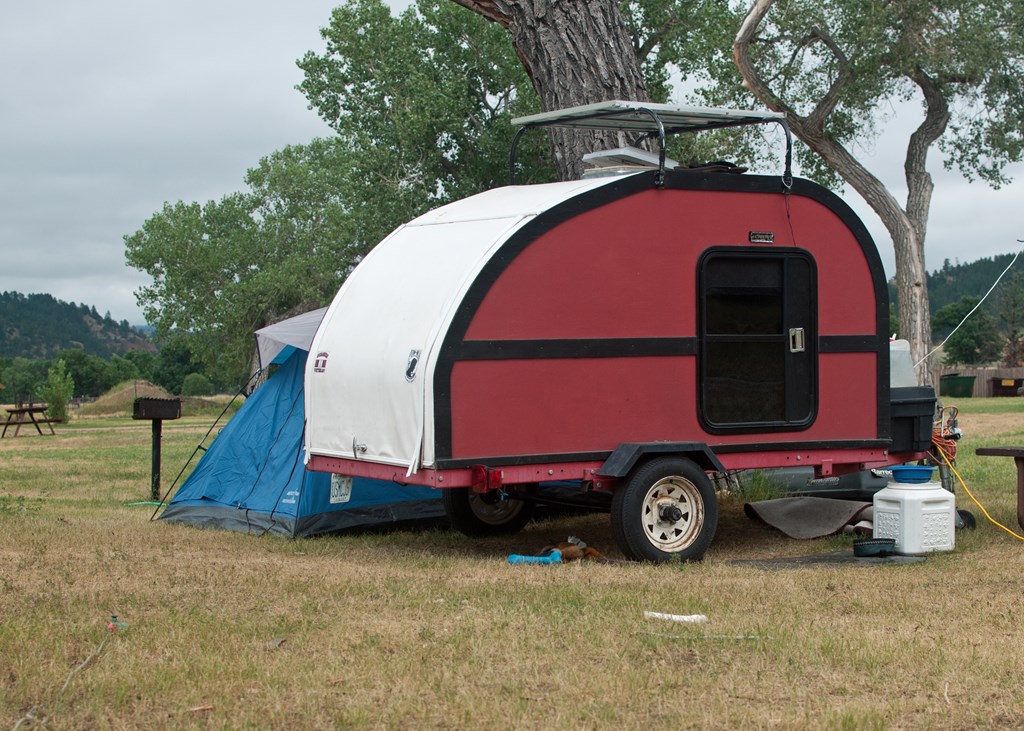 When on the road, he often pulled over for several days without seeing anyone else. So he was always prepared.

Sure, he had days of spam sandwiches and meals built around dried legumes and canned goods. But there were lots of elaborate dinners. An outdoorsman, he would sometimes hunt and fish when it was legal and then cook up his viddles.

By the time his epic adventure was over, Jason had been to just about every state except Oregon, Alaska and Hawaii.

Nick just laughed when I asked him about the kitchen facilities in his Little Guy teardrop. His style was more snacking than cooking during a five-week trip to a KOA convention in California. He called it a happy convoy of KOA owners, family and friends, several years ago. His teardrop was a star of this caravan, white with yellow and black waves and Jeep powered.

He doesn’t know much about preparing food but seems very informed about grabbing meals along Route 66 and other landmark drives. The trip was a 10,000 miles little space odyssey that started out at the family-run, Elkhart Co./Middlebury KOA Holiday in Indiana he manages and wended its way to and from California.

He wouldn’t call his teardrop glamping (that combination of glamour and camping you read about) but he sure enjoyed the luxury of not having to set up a tent. And he loved the mounted Surround Sound TV and assorted plug-in conveniences inside his six-foot wide cabin.

Maybe Nick’s most precious Little Guy creature comfort was his indomitable little space heater. He still recalls waking up to a once-in-ten-years blizzard in the Arizona desert and managing to keep warm.

It’s the little things in camping life that mean a lot.

Author’s Update: Since returning home to New Hampshire, Jason has sold his teardrop, something he says he fervently regrets. He is a happy newly-wed and loves his work as chef in a retirement home. Nick recently opened the season as manager at his family’s KOA in Elkhart Co. IN. Opening day was his birthday. He feels he was born to be there. Special thanks to Cor Bijvank at the Greybull KOA Holiday in Wyoming for his lovely remembrance of the happiest teardropper couple.

Jennifer Grambs is a journalist who has published three books about traveling in the United States as part of the American Traveler series. Jeff Grambs is a photographer with a website at GrambsPhoto.com and former broadcast news writer. 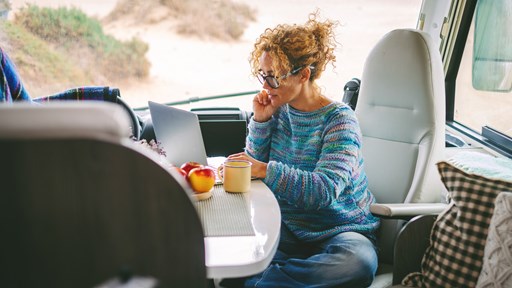 12 Tips for working remotely from your RV

Take your work on the road and explore by living the remote work life! With a few tips and tricks you can make the most of working and living in your RV. 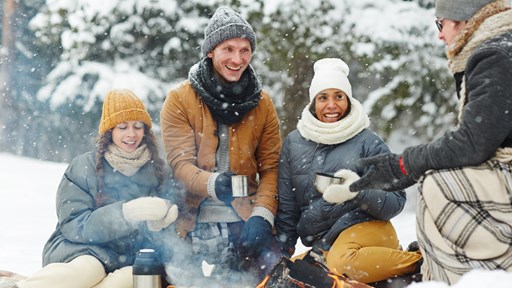 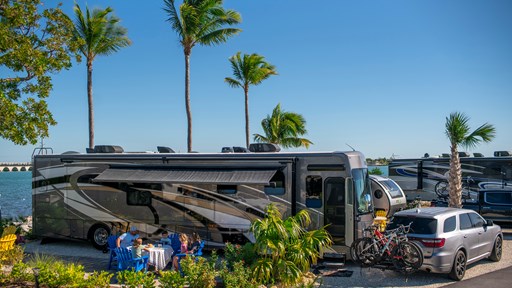