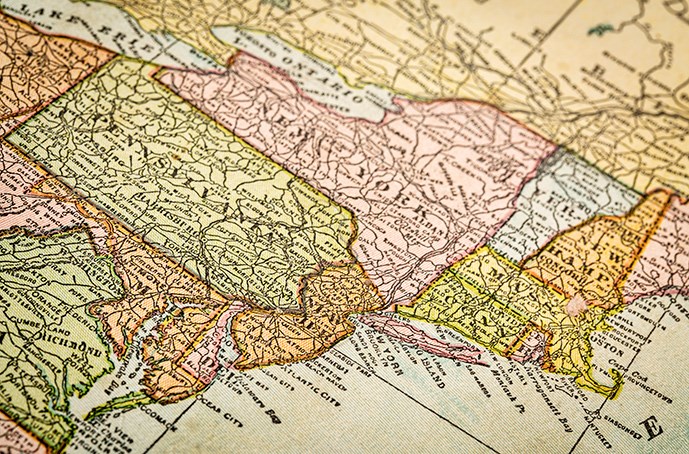 These off-the-beaten-path presidential sites are perfect for any history buff.

The six New England states make up a huge territory and travelers usually focus either on history or fall foliage when planning their visits. How about shaking it up a bit with a fun mobile app that helps you find offbeat presidential sites?

It’s pretty easy to find “mainstream” sites like presidential birthplaces and libraries, which are great destinations, but in this post I’ll focus on obscure sites and moments in presidential history to be found in Connecticut, Maine, Massachusetts, New Hampshire, Rhode Island, and Vermont. I found them all with help from one of my favorite mobile apps,  “Roadside Presidents,” which curates the slightly offbeat destinations and pullover stops that spice up any road trip. Here’s what I said about it and three other apps in a TV interview

Starting with Hartford, be sure to get a selfie with the Statue of “Jack,” the First Turkey saved by Presidential Pardon. While many believe turkey pardoning began with President Harry Truman, no lesser authority than The Smithsonian gives credit to Abraham Lincoln’s son Tad in 1863. Smithsonian describes the episode when the Lincolns received a live turkey for the family to feast on at Christmas:

“Tad, ever fond of animals, quickly adopted the bird as a pet, naming him Jack and teaching him to follow behind as he hiked around the White House grounds. On Christmas Eve, Lincoln told his son that the pet would no longer be a pet. ‘Jack was sent here to be killed and eaten for this very Christmas,’ he told Tad, who answered, ‘I can’t help it. He’s a good turkey, and I don’t want him killed.’ The boy argued that the bird had every right to live, and as always, the president gave in to his son, writing a reprieve for the turkey on a card and handing it to Tad.”

You’ll find Tad’s Jack in Hartford’s Lincoln Sculpture Walk, where there are 16 artworks in all. Take a virtual tour here, narrated by Doris Kearns Goodwin, famed historian and presidential biographer. 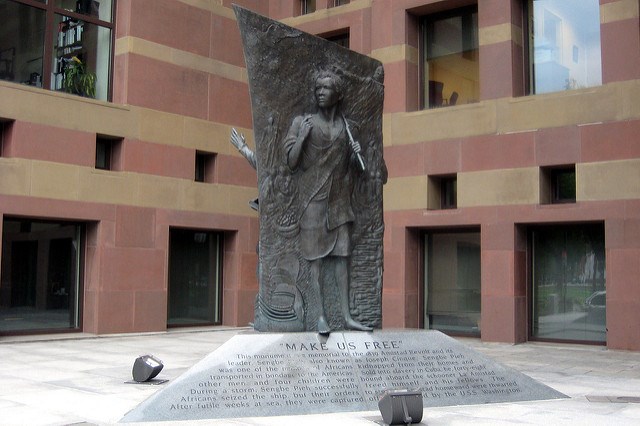 The “Amistad Memorial” in New Haven sits across from the very site where enslaved Africans were imprisoned in 1839 after a mutiny aboard La Amistad. They were freed after a landmark Supreme Court decision. What makes this a “presidential” site is that former President John Quincy Adams successfully argued the case before the Court.

While you’re in the state, follow the full Connecticut Freedom Trail  with 130 sites in more than 50 towns. During your visit in New Haven a replica of La Amistad may be in port. The Freedom Schooner Amistad is a Baltimore Clipper that sails the world as a floating classroom. Visitors who come aboard continue to learn the incredible story of the Amistad Incident of 1839 and also become aware of how slavery still exists today. They are given tools to become modern-day abolitionist.

Quick, can you name Abraham Lincoln’s first vice president? Maine residents can likely answer that question since Hannibal Hamlin was born in Paris and died in Bangor. Visit the Hamlin Memorial Library and Museum in Paris to see some Hamlin artifacts. The building itself is unprepossessing since it was originally built as the town’s jail. Right next door is Hamlin’s birthplace and on the town common across the street you’ll find a Hamlin plaque on a rock.

Hamlin’s “death couch” is on display in the Bangor Public Library, upon which he died on July 4, 1891. Factoids: Hamlin was playing cards when he collapsed on that couch, and apparently liked the game very much. He had also been playing cards when he learned he’d been chosen as Lincoln’s Vice President—the two only met in person after they had been elected.

Also in Maine is a statue of Hamlin, carrying a top hat in one hand and a walking stick in another. The stick has apparently been stolen on a few occasions.

“Washington Takes Command” is a grand diorama with 65 leaden soldiers on horseback depicting the day that then-General Washington took command of the Continental Army. The diorama is located in the lobby of the Sheraton Commander Hotel just north of the Cambridge Common, where Washington actually took command on the Common July 3, 1775. Each figure measures 2½ inches,  and is dressed in full uniform with tiny muskets, back packs and bedrolls, standing in formation facing the General.

Then, walk to the Common and find the marker that reads:

Also in Cambridge is Christ Church Cambridge (on Garden Street) where George and Martha Washington attended New Year’s Eve services in 1775, and where Teddy Roosevelt would to on to teach Sunday school while a student at Harvard. Plaques mentioning these presidents are on either side of the entrance door. 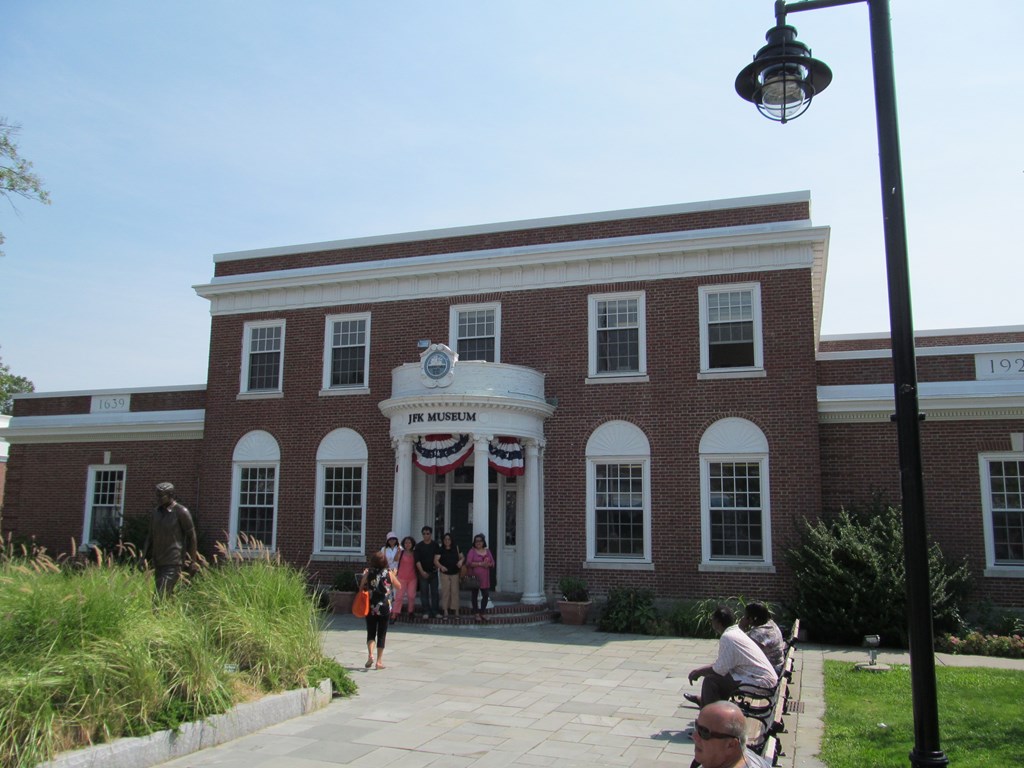 The John F. Kennedy Hyannis Museum is a great choice for 2017 as the museum commemorates the 35th president’s 100th birthday. Its exhibits feature videos and photographs spanning the years 1934 to 1963, including oral histories from JFK’s friends. Walter Cronkite narrates the orientation video that  depicts the president’s experiences on the Cape. The museum is arranged in thematic groupings to reflect John F. Kennedy, his family, his friends and Cape Cod, which he so dearly loved.

Most of New Hampshire’s presidential history relates to Franklin Pierce, whose most noteworthy accomplishment was The Gasden Purchase, which added all of southern Arizona and a large portion of New Mexico to the United States without bloodshed. President Pierce’s family home can be found in Hillsborough, where he lived for 23 of his first 30 years. The house still has its original wallpaper and wall stenciling.

The Franklin Pierce Home and Museum in Concord displays his beaver fur top hat, replicase of his White House china, and a red dress purported to have been worn by Pierce in his childhood. Concord planned to demolish the house in the 1960’s but a citizens group saved it for posterity.

Pierce history aside, there is more presidential history in the Granite State—namely, that New Hampshire is home to the first town to name itself “Washington”( in 1776). You’ll see an historical marker on Main Street.

Circling back to JFK on his centennial birthday, why not visit St. Mary’s Roman Catholic Church in Newport? That’s where he married Jacqueline Lee Bouvier in 1953. The church was declared a National Historic Shrine in late 1968.

In nearby Providence, visit the Stephen Hopkins House Museum, home of the Governor who signed the Declaration of Independence. The presidential tie-in? George Washington visited on April 6, 1776 and the site was declared a national landmark in 1978. 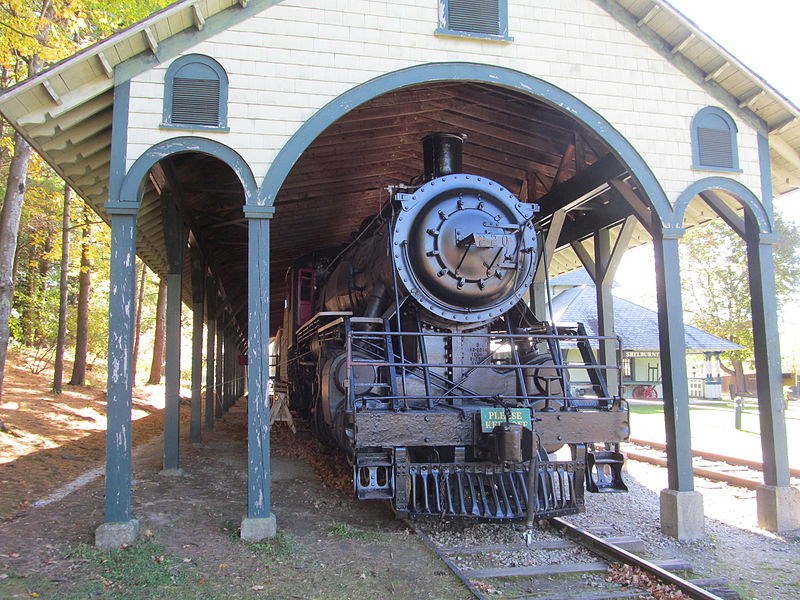 If you have to choose one Vermont stop, I’d recommend the Shelburne Museum in Shelburne, where you’ll see “the locomotive of the Presidents.”  Train No. 220 pulled special trains carrying Calvin Coolidge, Herbert Hoover, Franklin Roosevelt, and Dwight D. Eisenhower, which is what earned it the nickname. It was retired from service in 1956 and given to the Museum for preservation. While you’re there, be sure to see the private rail car Grand Isle. The luxury car’s mahogany-paneled parlor, dining room, and staterooms will take you back to America’s Gilded Age.

If you visit an offbeat or obscure presidential site, including these, please remember to use #KOACamping so we’ll be able to see what you discovered and share in the fun. 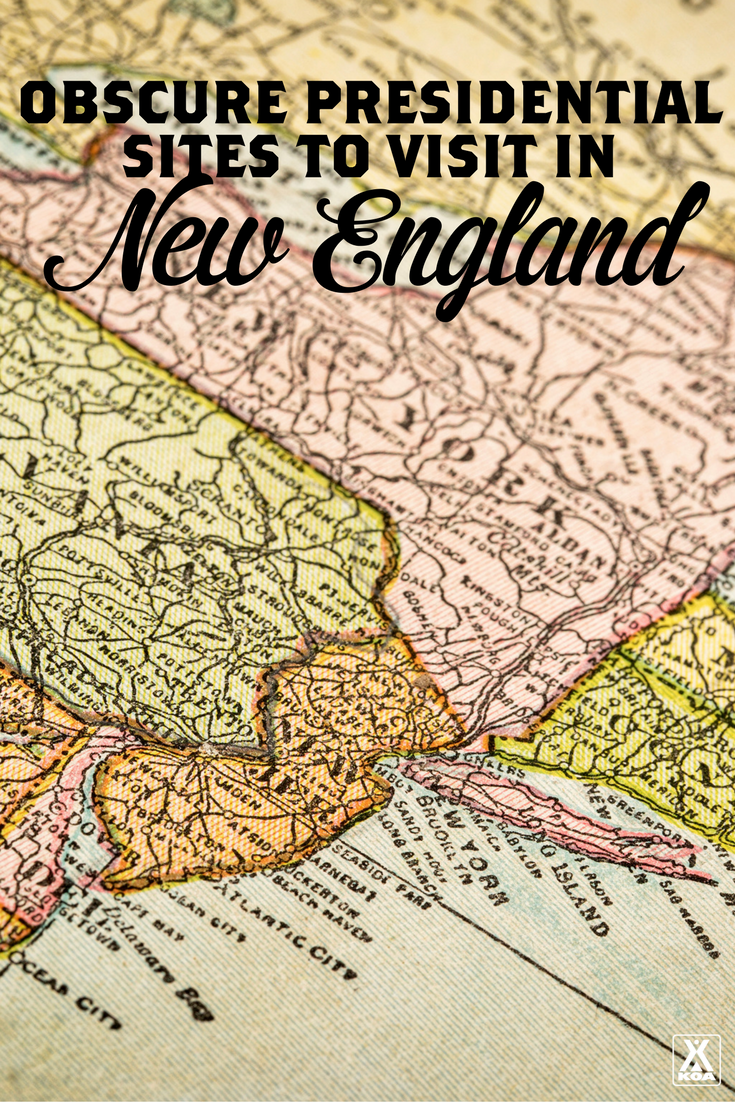