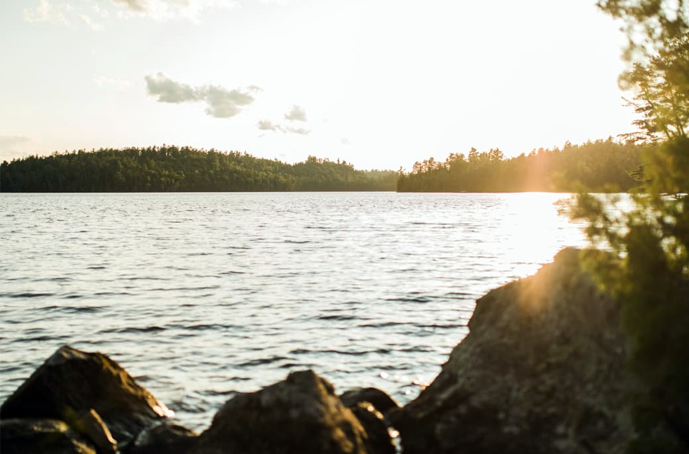 United States national forests account for vastly more acreage than national parks and promise essentially endless opportunities for outdoor recreation and nature appreciation. From the tropical verdure of Puerto Rico’s El Yunque and the pine savannas of Florida’s Ocala to the Northern Rockies wilderness of Montana’s Flathead and the temperate rainforests of Olympic (Washington) and Tongass (Alaska), there’s exceptional diversity within the more than 188 million acres of the National Forest System.

Taken together, the following eight national forests exemplify that diversity. Spanning the Lower 48, they’re each fantastic places to explore—and KOAs provide awesome accommodations in the vicinity.

Make sure to put these top national forests in the U.S. on your list:

The highest point in the Northeast falls within the magnificent White Mountain National Forest, close to 751,000 acres of pinnacle New England scenery. The forest encompasses most of the loftiest peaks in this part of the country, foremost among them the soaring summits of the Presidential Range of the White Mountains, which include 6,288-foot Mount Washington, New England’s crowning peak and its only 6,000-footer.

From wind-battered, tundra-clad mountaintops and peak-reflecting lakes to some of the world’s most glorious fall colors, the White Mountain National Forest is all-around breathtaking. Add to the mix plentiful chances to see moose—and, particularly in winter, the opportunity to chance upon the tracks of elusive carnivores such as Canada lynx and fishers—and you’ve got one of the finest destinations for outdoor recreation in the East.

Only one of several outstanding national forests along the Tennessee-North Carolina borderlands—and mighty convenient to the most popular national park in the country, Great Smoky Mountains—the Pisgah encompasses more than 500,000 acres showing off the lush and rugged glories of the Southern Appalachians. Here you’ll find one of the East’s greatest gorges: the plunging Linville Gorge, deeper than 1,000 feet and ramparted with such impressive rim-line peaks as Hawksbill and Table Rock. Then there’s the combined acreage of the Shining Rock and Middle Prong wildernesses blanketing the lovely highlands of the Great Balsam Mountains, including the iconic 6,030-foot Cold Mountain.

For the perfect digs on the doorstep of the Pisgah (and the Nantahala and Cherokee national forests close by), consider either the Asheville West KOA Holiday or Asheville East KOA Holiday KOA Kampgrounds, which also happen to give you access to one of the best mountain towns in the East.

Soak up the great North Woods at their finest in the Superior National Forest, which spreads across some 3.9 million heavily timbered and lake-strung acres of far northeastern Minnesota. Here you’ll find one of the great wilderness areas of the U.S. and an internationally renowned paddling destination, the Boundary Waters, which besides a seemingly endless network of wilderness waterways includes the Upper Midwest’s loftiest elevations in the Misquah Hills. Partly abutting Voyageurs National Park, the Superior and its rugged landscape of northern hardwood and boreal forest, peat wetlands, and outcrops shelter such wildlife as wolves, black bears, moose, white-tailed deer, fisher, and red fox.

The ancient highlands of the Ouachita Mountains anchor this oldest national forest in the southern U.S., established—as the Arkansas National Forest—in 1907 by President Theodore Roosevelt. It showcases long ridges and knobby bluffs, clear-running rivers, and old-growth oak, pine, and juniper woodlands. The Ouachita, nearly two million acres strong, casts a seductive spell, and you’ll often enjoy plenty of elbow room while falling under it—not least in multiple federal wilderness areas such as the Black Fork Mountain Wilderness. Most of the Ouachita National Recreation Trail, a fine long-distance footpath tracing the spine of these old weathered mountains, lies within the Forest.

Get to know the Ouachita National Forest’s pleasures with a home base at Hot Springs National Park KOA, which’ll also, incidentally, give you easy access to some soothing geothermal soaks.

The Kaibab National Forest presents a spectacular and varied slice of the Colorado Plateau across its three distinct units, which between them tuck both sides of the Colorado River’s Grand Canyon and reach the fringe of the great Mogollon Rim to the south. Gaze into the depths of chasms such as the Kanab Creek Canyon, climb the nearly 10,500-foot summit of Kendrick Peak in the San Francisco Volcanic Field, revel in sweet-smelling ponderosa forests and autumn-fired aspen stands, and keep your eyes on the skies for glimpses of California condors and their 10-foot wingspans. Whether you’re getting deep into the backcountry on 300-plus miles of trails or sightseeing behind the wheel on the Kaibab Plateau North Scenic Byway or from Crazy Jug Point, you’ll revel in some dazzling Southwestern vistas.

Sprawling across more than three million acres of the Greater Yellowstone Ecosystem, the Bridger-Teton is one of the biggest national forests in the Lower 48. Here you’ll find some of the remotest country in the continental U.S., and some of the most impressive mountain-scapes: from the Absarokas and Gros Ventre Range to the massive Wind Rivers, which include 13,804-foot Gannett Peak—Wyoming’s highest, and the loftiest summit in the Rockies outside of Colorado—and the dreamlike Cirque of the Towers, hallowed among climbers. Big mountains, big wilderness—oh, and big critters too, including grizzly and black bears, moose, elk, bighorn sheep, and gray wolves.

Bumping up against both Yellowstone and Grand Teton national parks, the Bridger-Teton is well worth experiencing for its own soaring scenery and wild spaces—and a base camp at the Jackson Hole / Snake River KOA or Dubois / Wind River KOA Holiday (also at the doorstep of the adjoining Shoshone National Forest) gives you front-row seats.

Running some 140 miles along the west slope of the Washington Cascades, the Mount Baker-Snoqualmie National Forest lays claim to some of America’s most beautiful alpine sightlines: range upon range of jagged, ice-crusted peaks, plunging from glacier and snowfield to deep valleys of towering conifer forest jungled with sword fern, vine maple, and devil’s club and run through with whitewater. Among the most-visited national forests in the country given its backyard proximity to the Puget Sound metro areas, the Mount Baker-Snoqualmie borders two out of three of Washington’s national parks—North Cascades and Mount Rainier—and counts about half its acreage as designated wilderness. Within its bounds you’ll find the mighty ice cathedrals of Mount Baker and Glacier Peak, the rugged jags of the Mountain Loop Highway, and a superabundance of other epic peaks.

Of several KOAs close by the Mount Baker-Snoqualmie, it’s hard to beat the Concrete / Grandy Creek KOA Holiday, which comes surrounded by the forest.

Consider the last three national forests on the list as something of a triple-whammy of superlative mountain scenery. Now, take into consideration the roughly 1.3-million-acre Sierra National Forest which runs along the crest and western slopes of the Sierra Nevada, and from the ripsaw heights of the Ritter Range and the many 13,000-plus-foot peaks of the John Muir Wilderness to aloof granite monoliths such as Fresno Dome. Its high country holds its own in the bowl-you-over department with any national forest in the country.

Running between Yosemite and Kings Canyon national parks and bordering the Stanislaus, Inyo, and Sequoia national forests, the Sierra helps compose one of the most significant blocks of roadless land in the Lower 48. Besides the granitic and volcanic summits, it showcases the incredible botanical diversity of the Sierra Nevada, including a number of groves of titanic giant sequoias.

Use the Visalia / Sequoia National Park KOA Journey as a springboard for adventuring not only in the Sierra National Forest but also the Sequoia and Inyo, plus of course the glorious mountains and forests of Kings Canyon-Sequoia.

The beauty of national forests is abundant and astounding. This list is just the tip of the iceberg. With 500 KOAs across the country you will have a spot to lay your head after a long day of exploring the vast beauty of the United States whichever national forest you choose to visit next. 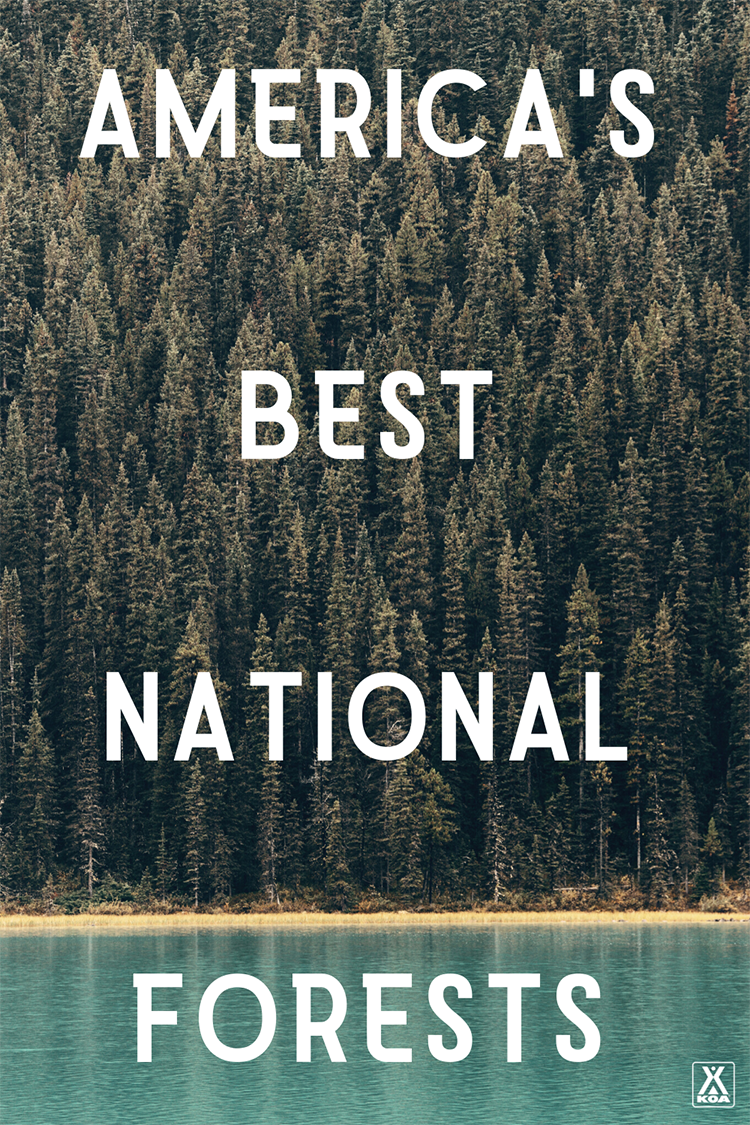