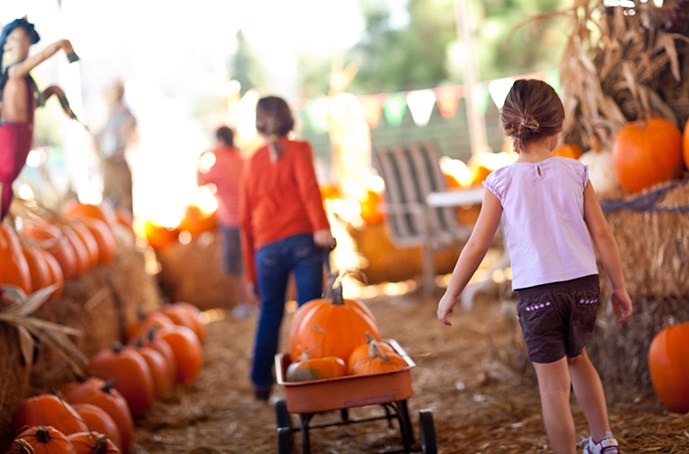 Fall is a season of celebration, be it cherishing the harvest, frolicking amidst foliage, or reveling in Halloween candy. And across the country, America’s national parks celebrate in their own unique ways, from a soulful—and swamp—music fest to events spotlighting scarecrows, Dungeness crab, beer, and more. These are some of the best fall events to check out this season in and near national parks.

Among the most unique fall festivals in the country, South Carolina’s Congaree embraces its inherent swampiness for a fun weekend of music, food (like an oyster roast and barbecue), and art. This year’s event takes place October 4 and 5, with two stages for live music focused on blues and soul, plus plenty of crafts, food trucks, artisan crafts, and family fun. It’s all held on the historic Harriet Barber House & Grounds, in conjunction with the national park.

Throughout the entire month of October, Wayne County, Utah, transforms into a veritable wonderland of fall merriment. As the name suggests, scarecrows are the stars, but there’s nothing scary about these colorful, whimsical characters that populate the Utah county for the duration of the festival. Visitors to the area can marvel at a multitude of fun scarecrow creations, crafted by local businesses, families, organizations, and the national park. Additional events take place throughout the country all month-long, including pumpkin-carving contests, food vendors, crafts, and the family-friendly Halloween party at Rim Rock Restaurant.

Travel back in time and celebrate the harvest season in true mid-19th century style at this free family-friendly event, which takes place all day November 2. Equal parts educational and fun, the fest is designed to showcase harvest season life on a bygone tobacco plantation, and what life was like for Booker T. Washington during his time on the Burroughs Plantation. Old-timey costume demonstrations (e.g. woodworking, blacksmithing), live music, gourd-painting, and food round out this history-minded event.

From face-painting and bounce houses to costume contests and carnival games, this lively Halloween affair has it all. Held October 26 in Bass Lake, California, right outside Yosemite, it’s got tons of fun, food, and music fit for the whole family. It’s free to attend, with fees for certain activities, like beer tastings, and there’s a supplemental craft fair held in The Pines Village parking lot October 25-October 27.

Another kid-friendly Halloween fest to attend can be found in the charming town of Medora, right outside North Dakota’s Theodore Roosevelt National Park. The historic hub has the picture-perfect backdrop for hayrides, haunted houses, costume dinners, Halloween movie screenings at Old Town Hall Theater, and more. Look for lots of free family activities throughout the event as well, held October 25 and 26.

Taking the place of Zion Rocktoberfest this year is the first-annual Zion Canyon Beer Festival, held on October 12 in Springdale, Utah. Hosted and organized by Zion Brewery, the festival is a love letter to the region’s booming craft beer scene, with an impressive lineup of local breweries poised to attend—Kiitos Brewing, Proper Brewing Co., Silver Reef Brewing Co., Policy Kings Brewery, and Hopkins Brewing Co. among them. There will also be food trucks and a kids’ zone, so bring the whole brood!

October through November, the Great Smoky Mountains region comes alive with seasonal celebrations and events, especially in the gateway town of Gatlinburg, Tennessee. Here, Oktoberfest is a huge deal, spanning several weeks and the entire month of October. During this period, Gatlinburg basically transforms into mini-Germany, with food specials like strudel and bratwurst, musical performances by the Smoky Mountain Oompah Band, outdoor games and activities, and Aerial Tramway rides over the town’s vibrant foliage. The event is anchored at the Ober Gatlinburg Ski Resort, accessible via tram or car, and it runs through November 2.

Another unique (and delicious) option is the Dungeness Crab and Seafood Festival in Port Angeles, Washington, alongside Olympic National Park. Held annually in October, the fest celebrates the region’s seafood bounty with more than a dozen participating restaurants, plus cooking demos, local wines, music, a chowder cook-off, and more.