The Best Campfire Songs for Any Camping Trip 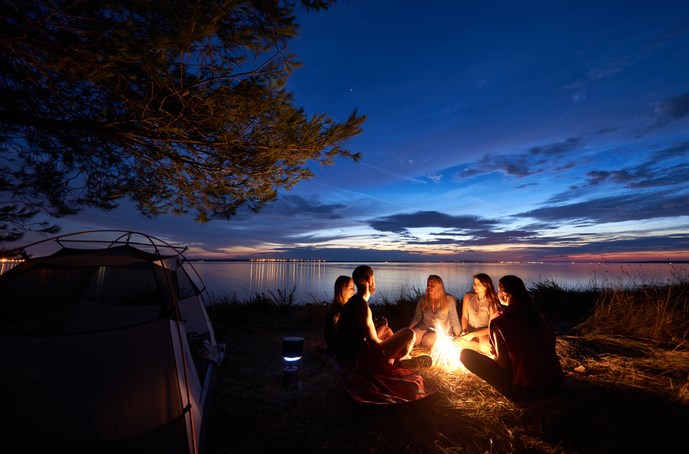 40 Top Campfire Songs to Sing During Your Next Camping Trip

One of the best parts of any camping trip is building a campfire and getting warm while roasting s’mores and singing campfire songs together. Although it is impossible to know who sang the first campfire song, singing songs together around a campfire in the outdoors has been a beloved tradition for centuries. Cowboys, soldiers and recreational campers alike have enjoyed indulging in this popular camping pastime as a way to relax and enjoy time spent together. 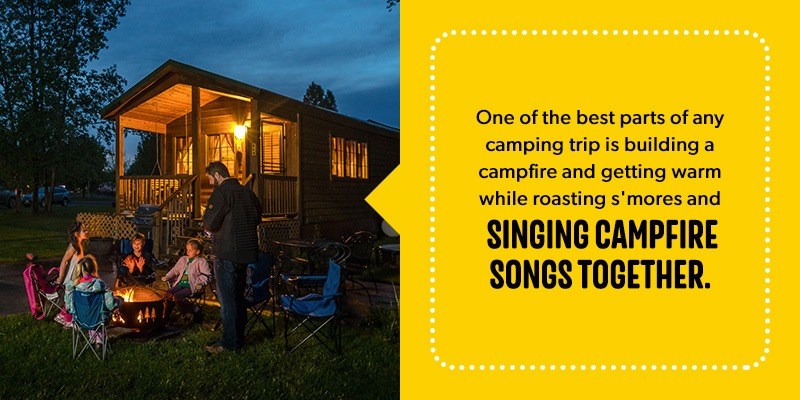 While some campfire songs tell stories, others are explicitly written to be funny and sung along with. Whether you are planning a trip for the whole family or your Scout troop, there are campfire songs fit for any group and occasion. These are 40 of the best campfire songs ever.

Camping trips are a popular tradition for many families because they offer something for everyone. At the end of the night — before you break out a few kid-friendly spooky campfire stories — sing-along together to some of these family-friendly campfire songs. 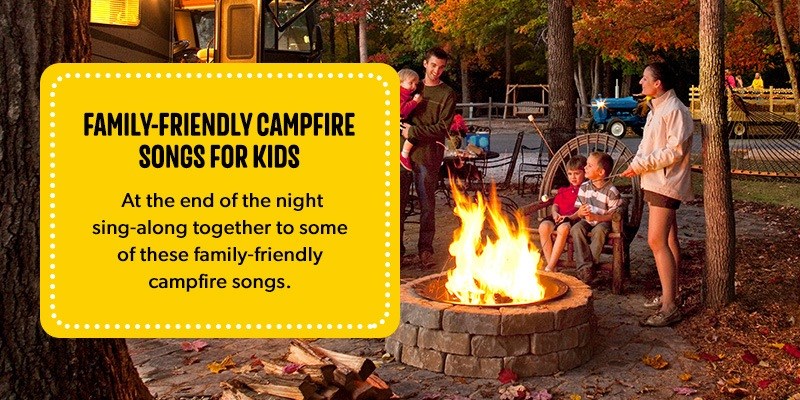 “Camp Granada” evolved from “Hello Muddah, Hello Fadadduh,” a Grammy-award winning parody performed by comedian Allan Sherman in 1963. A year later, Sherman wrote this now-popular version and played it on “The Tonight Show With Johnny Carson.”

“Five Little Speckled Frogs” is a well-known nursery rhyme that is perfect for young children. It tells the story of five frogs who sit on a log, taking turns jumping into the cool water. The campfire song lyrics are also educational and teach children the basics of mathematical subtraction.

“I’m Being Swallowed By a Boa Constrictor”

Author Shel Silverstein wrote and performed “I’m Being Swallowed By a Boa Constrictor,” which Johnny Cash later went on to cover. The poem-turned-song is told from the perspective of someone being eaten by a boa constrictor — but do not let the subject matter fool you. It is a lighthearted, funny tune that kids love singing along with.

“Bumpin’ up and Down in My Little Red Wagon”

It is unclear where this song originated from, but young kids everywhere started singing along with “Bumpin’ up and Down In My Little Red Wagon” after aired on Barney the Dinosaur’s “The Backyard Show.”

If your kids are fans of “SpongeBob Squarepants,” they will recognize this song immediately. “The Campfire Song Song” is sung by Spongebob, Patrick and Squidward in “The Campfire Episode” of the show’s third season.

“We’re Going on a Bear Hunt”

Author Michael Rosen based his children’s book “We’re Going On a Bear Hunt” — which tells the story of a group of siblings trying to find a bear before getting scared when they actually find one — on a popular tune that circulated American summer camps in the 1970s. The book was so popular that the words were adapted into this beloved kid’s camp song.

“The Green Grass Grew All Around”

“The Green Grass Grew All Around” is said to have grown from an Appalachian folk song. It is a famous example of a cumulative song, meaning its lyrics begin with a simple verse, and each verse afterward is modified to be a little bit longer and more complex than the one before.

“Alice the Camel” sings the song of Alice, a camel, who starts the song with five humps and ends with none at all. “Alice the Camel” is similar to “Five Little Speckled Frogs,” in that it teaches kids how to count down from five.

“On Top of Spaghetti”

“On Top of Spaghetti” is also known as “The Meatball Song.” It is set to the tune of the song “On Top Of Old Smoky,” and tells the story of a meatball that falls from a plate of spaghetti and rolls onto the floor.

Everyone is familiar with this family-friendly hit. Kids love “B-I-N-G-O” because they can sing and clap along with these campfire song lyrics.

“She’ll Be Coming ‘Round the Mountain”

One of the earliest known recordings of this song is from the 1920s, but “She’ll Be Coming ‘Round the Mountain” has been around for far longer. Thanks to the repetitive lyrics, this one should be easy for all the kids to follow along with.

Mix loud singing with nonsensical lyrics, and you have a family-friendly song that is sure to be a hit with every kid around your campfire. “Boom Chicka Boom” is a good example of this.

“My Bonnie Lies Over the Ocean”

Thanks to its slower pace and repetitive chorus, “My Bonnie Lies Over the Ocean” is an easy song to sing for children and adults alike.

“John Jacob Jingleheimer Schmidt” is a beloved children’s song thanks to the varying volume and tempo, both of which increase and decrease throughout the song.

“Home on the Range”

“Baby Shark” was a recent viral hit, easily making it one of the most recognizable songs on the family-friendly campfire song list. When you sing “Baby Shark,” do not forget to include the hand motions!

Any camper who has spent time in the great outdoors knows that with the beauty and adventure comes pesky bugs. “Ain’t No Bugs On Me” pays tribute to this part of the camping experience.

“Do Your Ears Hang Low?”

“Do Your Ears Hang Low” is a simple-to-sing, family-friendly campfire song that pokes fun at the floppy ears of rabbits and hound dogs.

“The Wheels on the Bus”

“The Wheels on the Bus” is a classic song for school children across the country. Consider singing this song around the campfire with young children who are starting school soon.

“Baby Bumblebee” is a cute campfire song that tells the story of a child who finds a bumblebee and cannot wait to show their mother — that is, until they are stung by the bee and forced to squish it. 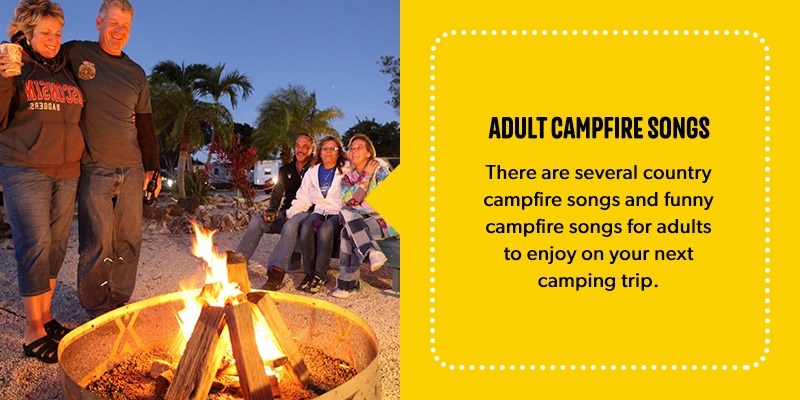 Campfire songs are not just for children. There are several country campfire songs and funny campfire songs for adults to enjoy on your next camping trip. For an even better experience, bring your guitar and strum along to these classic hits.

“Take Me Home Country Roads” was recently made re-popular when a medley of country stars covered this John Denver classic. The song has become the unofficial anthem of not only West Virginia, but of small-town rural Americans everywhere.

Neil Diamond wrote this 1969 song for his then-wife. Her name was actually Marsha, but he needed a three-syllable name for the lyrics to work — and thus, “Sweet Caroline” was born.

A love anthem for couples everywhere, Van Morrison’s “Brown Eyed Girl” is a fun song to sing — and clap — along with around the campfire.

The band Old Crow Medicine Show wrote “Wagon Wheel” based off of a few melodies that Bob Dylan created for a movie back in 1973. Banjo players and vocal harmonizers will love singing this hit, which was famously sung by Darius Rucker in 2013.

“Ring of Fire” by Johnny Cash

You would be hard-pressed to find someone who does not know the words to this iconic song, sung by The Man in Black. Since its original release, “Ring of Fire” has been covered by artists across all genres, including pop and rock.

“You Are My Sunshine”

“You Are My Sunshine” is a sweet, simple anthem and the state song of Louisiana.

“Edelweiss” From “The Sound of Music”

“Edelweiss” is a little bit different from the other campfire songs due to its musical origins. The song is performed in Rodger and Hammerstein’s production, “The Sound of Music.” Many campers enjoy strumming and singing softly to “Edelweiss” as a way to slow things down at the end of the night.

“American Pie” is an eight-minute song, praised by many as the rock-and-roll anthem of America. The song is so popular that in 2015, the original handwritten lyrics were sold at an auction in New York for 1.2 million dollars.

This song is among one of the more modern campfire songs, but it is a popular choice. The Zac Brown Band released “Chicken Fried” in 2005, and since then, it has become one of the top songs to sing around a campfire.

“Stand By Me” is a gospel anthem from the 1960s. It is the perfect song for any group of friends who want to celebrate their time together. 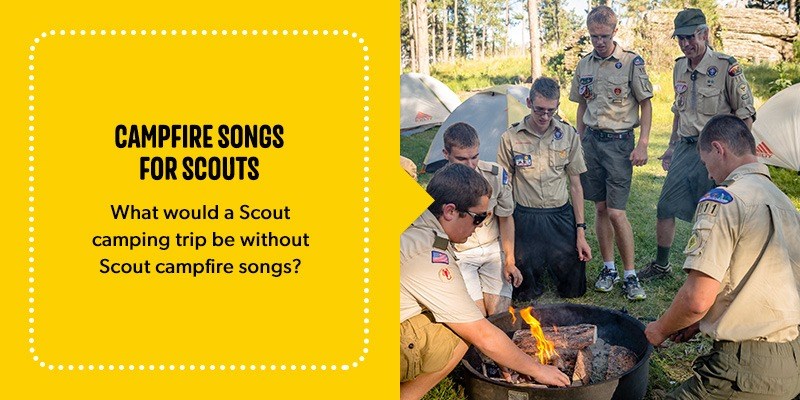 What would a Scout camping trip be without Scout campfire songs? Here are 10 of the most well-known Scout songs for your troop to sing on their next outing.

“Hail, Hail the Gang’s All Here”

“Hail, Hail the Gang’s All Here” is a greeting song to start your Scout camping trip off on the right note and quickly grab the attention of your campers.

“A Song That Gets on Everybody’s Nerves”

If you are camping with a Girl Scout troop, sing “Girl Scouts Together” to remind your campers what it means to be a Girl Scout — performing good deeds while being friendly to neighbors and country.

“We Are the Boy Scouts of America”

Young campers love “Ging Gang Gooli” because of its nonsensical words and fun beat. For example, the first few lines are:

The “Brownie Smile Song” was written for Brownies in Girl Scouts. It is a short, easy-to-sing song that will easily capture the attention of young Brownie Scouts.

Girl Scout Daisies are girls in Kindergarten and the first grade who want to learn more about fun, sharing and leadership. “I’m a Girl Scout Daisy” is a simple song that reinforces these values.

“Make New Friends” is a Scout campfire song that encourages campers to “make new friends, but keep the old,” and it is a great way to break the ice between new Scout members.

“I Met a Bear” is a fun song that requires a leader to sing the song so the campers can repeat different phrases throughout the verses. In this song, the singer comes face to face with a bear, which ends with the singer running away and jumping into a tree to escape.

Start Planning Your Next Camping Trip 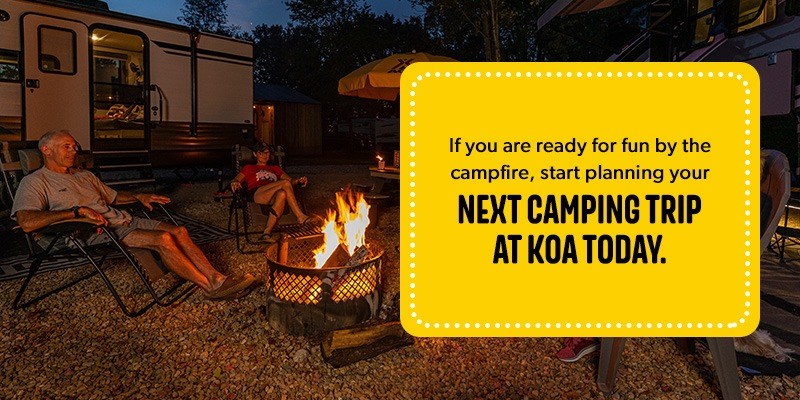 If you are ready for fun by the campfire, start planning your next camping trip at KOA today. KOA has several different lodging options available, including:

Available lodging varies from campground to campground so be sure to check with the specific KOA location that you’re interested to see what is offered there!

Every guest at KOA has access to laundry facilities, clean bathrooms with hot water, a playground and a KOA Store. Depending on which campground you stay at, you may also have access to unique features and amenities, like swimming pools, game rooms and mini golf.

Ready to start your camping adventure? Find a KOA near you to get started. 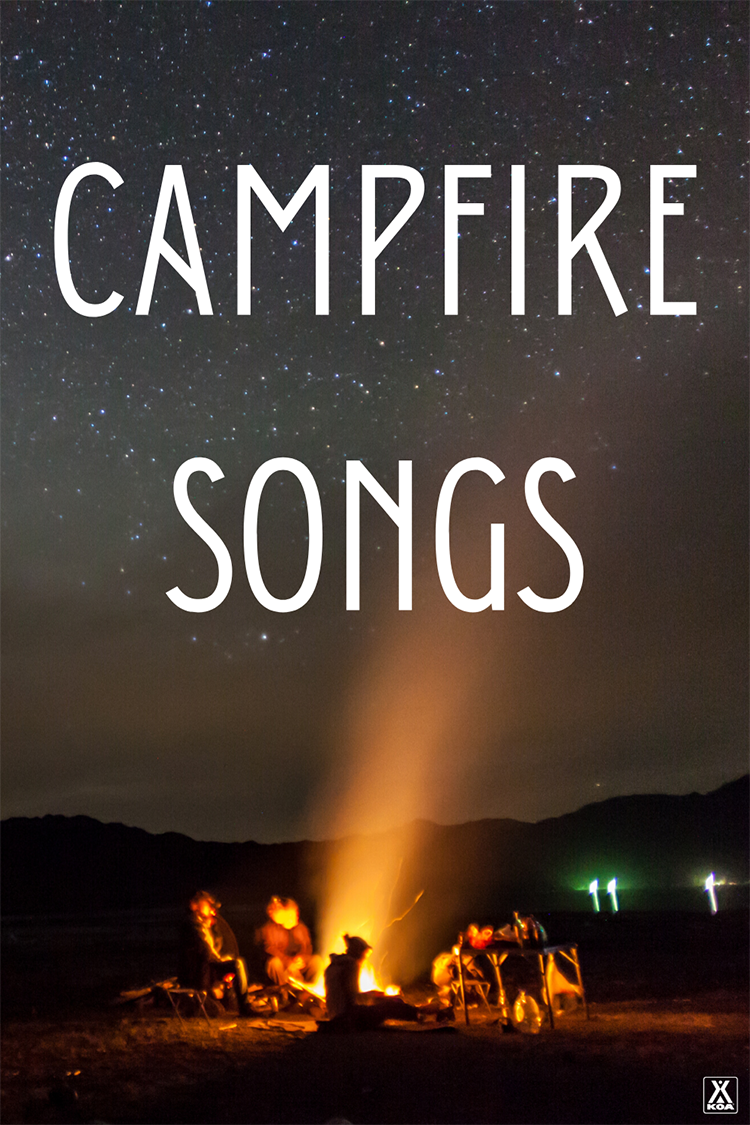