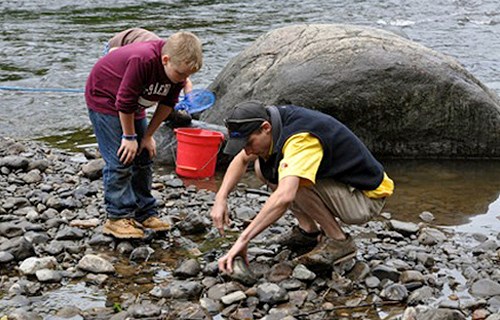 One of the things people love most about KOA is the ease with which it morphs into exactly what you desire out of a camping trip. You can show up with your days completely planned (even if those plans involve doing nothing but relaxing). Or you can show up with a blank calendar — and our campground hosts will fill every minute with activities and suggestions about what to experience while you’re in their neck of the woods.

Joanne Courneya-Fralick, along with her family, recently experienced the latter — showing up and letting KOA treat them to a “summer camp for the whole family” experience. Here’s their fun-filled story.

Nature’s bounty and beauty are both features of New York State’s Herkimer Diamond KOA. The 2011 North American Kampground of the Year is situated on the picturesque West Canada Creek and is part of the adjoining Herkimer Diamond Mine.

Family fun started as soon as we were greeted. The friendly and capable KOA staff handed us an itinerary. A flashlight candy hunt was just beginning! After a long drive our eight-year-old boy eagerly grabbed his light and joined in while we adults finished settling in and got the campfire going. We relaxed in front of the flames and roasted fluffy baked potatoes in foil. Later that evening, we fell asleep to the sound of the creek’s water gurgling gently over the rapids.

The next morning, KOA staffer Jordan led a group of kids down to the creek for some trout fishing and crayfishing. With nets in hand, everybody got busy turning over rocks. Along with crayfish, Jordan identified hellgrammite larvae, tadpoles, minnows and even a small brown salamander. While the kids were busy splashing in the creek, adults were participating in a fly fishing demonstration in front of the KOA store while others were across the road learning about gemstones at the Diamond Mine Store.

After lunch it was time to check out the main attraction — the mine. A short instructional video helps explain what to do and look for in the mine — a big help for us novices. You can provide your own equipment or borrow a hammer on the site. The afternoon was cool and overcast, which turned out to be perfect weather for breaking rocks and searching for Herkimer diamonds and fossils. The open pit mine had several groups and individuals pounding on the rocks. We chose a spot and joined in with the chorus of clicking hammers and shouts of excitement when a find was made.

There are a few things you can do to make your Herkimer Diamond Mine experience more enjoyable. Wear thick-soled shoes or hiking boots and jeans (the rocks are sharp). Bring a bottle of water to keep hydrated. And slap on the sunscreen. Eye protection is mandatory. Sunglasses work well, or you can purchase goggles at the gift shop. We saw one experienced miner who had brought a beach umbrella and propped it up in the rubble for shade.

Herkimer Diamonds are beautiful double-terminated quartz crystals found in Herkimer, New York. Incredibly, these phenomenal gemstones are close to five hundred million years old. The crystals are magnificent works of nature, found in the rock, having a diamond-like geometrical shape — thus, the name recognition of “Herkimer Diamonds.” The collecting methods range from casually looking along the prospecting area to digging through the rubble energetically, using crowbars, sledgehammers and heavy chisels. The most popular tools are a two- to three- pound crack hammer and a bull point chisel, and the most popular method of prospecting for loose Herkimer Diamonds is by breaking them out of a single rock.

If mining isn’t your thing, there is a large gift shop on site where you can buy finished jewelry or raw samples. A small upstairs museum displays both minerals and fossils, including Randy — a real fossil Majungatholus dinosaur skull unearthed in Madagascar. Out front is Randy’s Sluice. Purchase a bag of sand in the store and pan for fossils, gems and Herkimer diamonds. Your treasures can be expertly appraised in the gift shop.

After a day of mining, there was barely time for dinner with all the Saturday night activities KOA staff had planned. A hayride was followed by an hour of bingo and an ice cream social — with proceeds going to the KOA Care Camps fund for children with cancer. After dark, everybody gathered around the S’mores and More Pit for a bonfire and, of course, s’mores. The night ended with a family movie at the outdoor Creekside Cinema.

On our last day, KOA staff served up a pancake breakfast fit for hungry miners, complete with eggs, sausage, coffee or juice. The boys took a dip in the camp’s octagonal pool while Mom walked back to the mine gift shop to have her Herkimer diamond placed in a setting. Later that afternoon, we walked through the camp’s organic vegetable garden display. When they’re ripe, the veggies can be shared by the campers, for a donation to the Care Camp fund.

That afternoon, we reluctantly bid goodbye to Herkimer Diamond KOA. It was a fun-filled family weekend of swimming, playing, enjoying the outdoors and treasure hunting. Next time, we have to take in some of the other attractions like a cruise on the Erie Canal or tubing on the West Canada Creek. We might even try one of their three solar Lodges!

Freelance Journalist Joanne Courneya-Fralick loves family adventures with her husband Martin and son Robbie. To them, KOA camping guarantees a comfortable, safe family experience, with something for everyone. Joanne and Martin maintain a Facebook page of their adventures, The Roving Campers. They also have a Facebook page on their upcoming historical memoir Camp Picton/The Heights. While the family lives in a beautiful part of eastern Ontario, they love to KOA-hop in the USA.