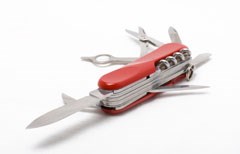 What would you include in your own Swiss Army Knife? Our campers have a few ideas.

Odds are you have one. Or had one. Or really wished you had one when you needed to tighten a screw, open a bottle of wine or pull out a sliver while you were camping.

The perfect tool for any camping multi-tool, Swiss Army knives are known for their sleek design, practicality and virtual indestructibility. And they have a history befitting their reputation.

Created by Carl Elsener in Ibach, Switzerland more than a hundred years ago for use by (you guessed it) the Swiss Army, the original tool offered users a single blade, reamer, can opener and screwdriver—the items needed most by soldiers in the field. A second blade, and the knife’s signature corkscrew, were added by Elsener in 1896.

During World War II, GI’s loved the handy knives, but struggled to pronounce the name “Schweizer Offiziersmesser” (Swiss officer’s knife.) They dubbed it the “Swiss Army knife” and the name stuck.

The name of Elsener’s company, Victorinox, is a combination of his mother’s name, Victoria, and “inox”, or stainless steel. Today, the company continues to supplies knives to the Swiss Army, as does Wenger, a former competitor purchased by Victorinox in 2005.

Swiss Army knives are now as diverse as the people who use them. No longer just for the battlefield, they are as common on the in boardrooms as they are on campgrounds. While its simple design, which is part of the New York Museum of Art’s permanent collection, has remained largely unchanged, the knife has morphed to include a variety of tools. Grab the Handyman version and your knife will come complete with a pliers, a wood chisel and hook. The Swiss Champ has magnifying lenses, a fish scaler and multiple bladese. Or for the perfect office tool, grabe the Victorinox Flash—which comes complete with a 16GB flash drive, an LED flashlight and even a retractable ball point pen.

We asked our campers on Facebook what tools they’d include in a Swiss Army knife if they could design their own. Here are a few of the things they told us:

Serenna Jordan: “Toothbrush [because] I can’t go without it.”

Rainer Mueller: “A light saber (or at least a laser.)”

Other suggestions included a Blackberry/iPhone, a disintegrator ray, mascara, an extendable stick for marshmallow roasting and an ATM. But one of personal favorites came from James Butler, who suggested, “the dart shooter/bow and arrow thing from ‘Get Smart.’ Now THAT was a Swiss Army knife!”