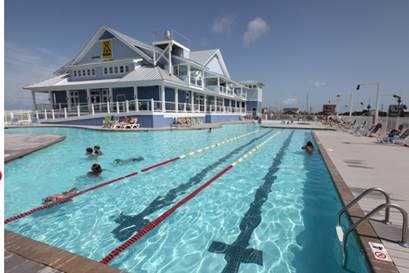 For many, vacationing in the Outer Banks of North Carolina is a peaceful respite. The beautiful coastline unfolds hundreds of miles of natural beaches and sand dunes covered with sea oats dancing in the coastal breeze.

The Cape Hatteras KOA Campground, located on Hatteras Island, has long offered premier camping in the midst of this beach paradise. But this campground, and many of the businesses and residences along this stretch of national shoreline, have been through an extensive rebuild process following a series of natural weather disasters.

Hurricane Irene, which wreaked havoc across much of the Caribbean and East Coast of the United States in August 2011, nearly destroyed the area. At the KOA, cabins were swept away, the main building was leveled, the pool destroyed, RV sites were underwater — the entire campground was affected by the storm.

Construction on Cape Hatteras KOA began quickly after the storm, but was delayed numerous times by weather, including a second hurricane and large nor’easter that blocked the entrance to the island and washed away the ocean’s dunes.

The relentless weather proved challenging for the residents and business owners in the Outer Banks, but they’ve responded with resilience.

“This project is a good sign of life coming back to the area,” said Dare County Board of Commissioners Chairman Warren Judge, thanking KOA for making this investment in Hatteras Island and for moving quickly after Hurricane Irene.

Following an extensive rebuilding process, Cape Hatteras KOA was unveiled as one of the first Resort properties in the KOA system on May 1 – 4, 2014 to a crowd of campers who stayed the weekend and partook in grand re-opening festivities. Local business owners, residents and county commissioners attended Friday’s Ribbon Cutting Ceremony, hosted by the Outer Banks Chamber of Commerce, in which guests flew kites to commemorate the event.

Chairman and CEO Jim Rogers, who was featured on the hit CBS series “Undercover Boss,” was present for the ribbon cutting, and said the rebuilt Cape Hatteras KOA Resort is a state-of-the-art facility that is well worth the investment.

“We didn’t hesitate to start rebuilding as soon after the storms as possible,” Rogers said. “Cape Hatteras is a key area for us, and the campground is obviously a much-loved location for our campers. We are proud to have this level of facility to serve our guests on the Outer Banks.”

An inclusive vacation destination with a variety of accommodations unique to the KOA system, the oceanfront resort is a perfect place to stay and play a while. Elevated Deluxe Cabins offer ocean views and come furnished with linens and kitchen supplies, and a new main building houses a store, café, and, on the third floor, Vacation Suites that rival resort hotel accommodations. These suites overlook the pool, with views of the ocean, or the sound, where sunsets are legendary.

Where once the wreckage of a modest pool sat, an Olympic-sized pool has been constructed, featuring a zero entry area, lap lanes, two water slides and hot tub. Campground guests have full access to all the campground’s amenities, including the pool, hot tub, on-site recreation, mini golf, jumping pillow, Wi-Fi, cable TV, meeting space and more.

For more information on this property, or to reserve a stay this summer, visit their page on KOA.com HERE

View a special video of the rebirth of the Cape Hatteras Resort KOA below: