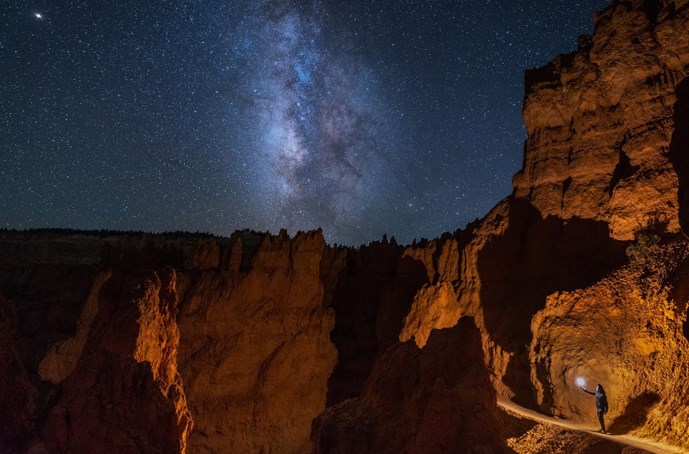 There aren’t many things more magical than a night sky absolutely spangled with stars (and a few fellow planets thrown in for good measure). Yet what once was a universal fixture of the after-hours human experience has become increasingly rare in our extravagantly electrically lit world. In the United States, a 2016 study suggested more than 99 percent of the population lived with light-polluted night skies, and estimated more than two-thirds of Americans can’t see the Milky Way with the naked eye where they live.

That said, there are many places in the country still endowed with some magnificently dark night skies, far from the glow and glare of big cities and sprawl. Places where the constellations are hard to pick out simply because of the sheer, dazzling density of stars. Places where meteor showers are downright hot and heavy. Places where the keen-eyed can pick out the most distant object usually visible to the unaided human eye: the Andromeda Galaxy, about 2.5 million light years away. Places, in short, where the marvels of the heavens above are on full display.

The following are nine of the best sites in the USA to relish a deep, black, starry sky, all of them acknowledged in one way or another by the International Dark Sky Association, and all of them conveniently close to a KOA Campground for your overnighting pleasure.

Set within the Sussquehannock State Forest, Cherry Springs is one of the most celebrated stargazing destinations in the eastern U.S., and the region’s first designated International Dark Sky Park. Set at 2,300 feet on the Allegheny Plateau, buffered by protected forestland and with the closest towns nestled in valleys, the park offers exceptional conditions for taking in the heavens. Choose between the Overnight Astronomy Observation Field with its 360-degree view—reservations and a fee are required to stake out here all night—or the Night Sky Public Viewing Area with its amphitheater, a good choice for those with only a few hours to skywatch.

The Kinzua East KOA provides fairly close camping and glamping accommodations to this very special oasis in the Mid-Atlantic.

Glacier National Park is famed for its outrageously photogenic peaks and a rich roster of megafauna, from grizzlies and wolves to moose and mountain goats. As it happens, its breathtaking terrain also basks in some sumptuous starlight. Glacier and its adjoining sister national park of Waterton Lakes in Alberta, Canada compose the very first International Dark Sky Park designated.You’ve got not one but two fine KOA Kampgrounds from which to enjoy Glacier’s night skies (and all its daytime splendor): the West Glacier KOA Resort and St. Mary/East Glacier KOA Holiday, both right on the park’s doorstep.

The Kissimmee Prairie offers some of the darkest skies in the Sunshine State courtesy of its remote, rural setting along the headwaters of the Everglades north of Lake Okeechobee. The vastness of its dry prairie habitat provides a heck of a stage for taking in that unblemished firmament—and the opportunity to spot such awesome birdlife as crested caracaras and grasshopper sparrows while you wait for sundown. The more southerly location of this park also gives you a perch to see stars that don’t break the horizon—or at least don’t spend much time above it—farther north, such as Canopus, the second-brightest star in the sky.

Use the Okeechobee KOA Resort as your H.Q. for an astronomical odyssey in the Kissimmee Prairie Preserve!

Here’s another stargazing destination in an epic setting: a pristine swath of Lake Michigan shoreline along the Straits of Mackinac, which connect that Great Lake to Lake Huron and separate Upper and Lower Michigan. Open 24 hours a day, 365 days a year, Headlands provides fabulous year-round viewing of stars, planets, galaxies, and meteor showers. Another plus: This is a great place to savor the pulsing color show of the Northern Lights (aurora borealis), most frequently observed around the spring and fall equinoxes.

With a campsite or cabin at the Mackinaw City / Mackinac Island KOA Journey, you’ll be just minutes from the Headlands’ nighttime wonderland.

This mesmerizing park among the drylands of Idaho’s Snake River Plain is named for the supposed resemblance of its rugged lava fields to the lunar surface, but the label could just as well describe the caliber of the night skies here. Designated an International Dark Sky Park in 2017, Craters of the Moon puts the celestial sphere at your fingertips with an otherworldly terrestrial environment—product of the same volcanism now fueling the geysers and hot springs of Yellowstone to the northeast.

Look no further than the Craters of the Moon / Arco KOA Journey for your stargazing base camp—and keep in mind this Kampground also puts you within striking distance of the extensive Central Idaho Dark Sky Reserve in the Rockies to the northwest.

A whole plethora of International Dark Sky Association-recognized sites are scattered—like a constellation, you might say—across the unbelievably gorgeous plateaus, canyonlands, and slickrock deserts of Southern Utah. They include such national parks as Cedar Breaks, Bryce Canyon, Capitol Reef, Canyonlands, and Arches, plus Natural Bridges and Hovenweep national monuments and Goblin Valley and Dead Horse Point state parks. And those are just the formally established Dark Sky sites; destinations such as the backcountry of Grand Staircase-Escalante or the Fishlake National Forest are going to serve up plenty of celestial superlatives, too. It’s not a stretch to say that few places in the world offer the same combination of glorious landscape and pure night sky as Southern Utah.

As it happens, you’ve got just as rich a lineup of KOAs to choose from for your Southern Utah skywatching safari, including the Beaver KOA Journey  and Moab KOA Holiday.

One of the planet’s most astonishing canyons is also one of the best places in the Lower 48 to ponder the Milky Way and more distant galaxies. After a day swooning over the billion-plus years’ worth of geology encoded in this mile-deep chasm—the multicolored strata, the mesas and pillars and promontories—kick back and gaze into immensely rich skies. You can stare right down the center of the Milky Way to such galactic landmarks as the Sagittarius Star Cluster: mind-blowing scenery most in the continental U.S. never get to appreciate these days.

Given its ethereal bouldery outcrops and Dr. Seussian namesake yuccas, Joshua Tree National Park is a dreamy place to gaze upon the night sky. Its remote location at the meeting-ground of the Mojave and Sonoran deserts—not to mention the dry air—makes that sky dark and deep indeed. Whether you’re participating in one of the numerous astronomy-focused ranger programs, attending the Night Sky Festival, or just doing some self-guided stargazing, you’ll find great depths of space to plumb here.

The Palm Springs / Joshua Tree KOA awaits any and all amateur astronomers beelining for that Joshua Tree outback. 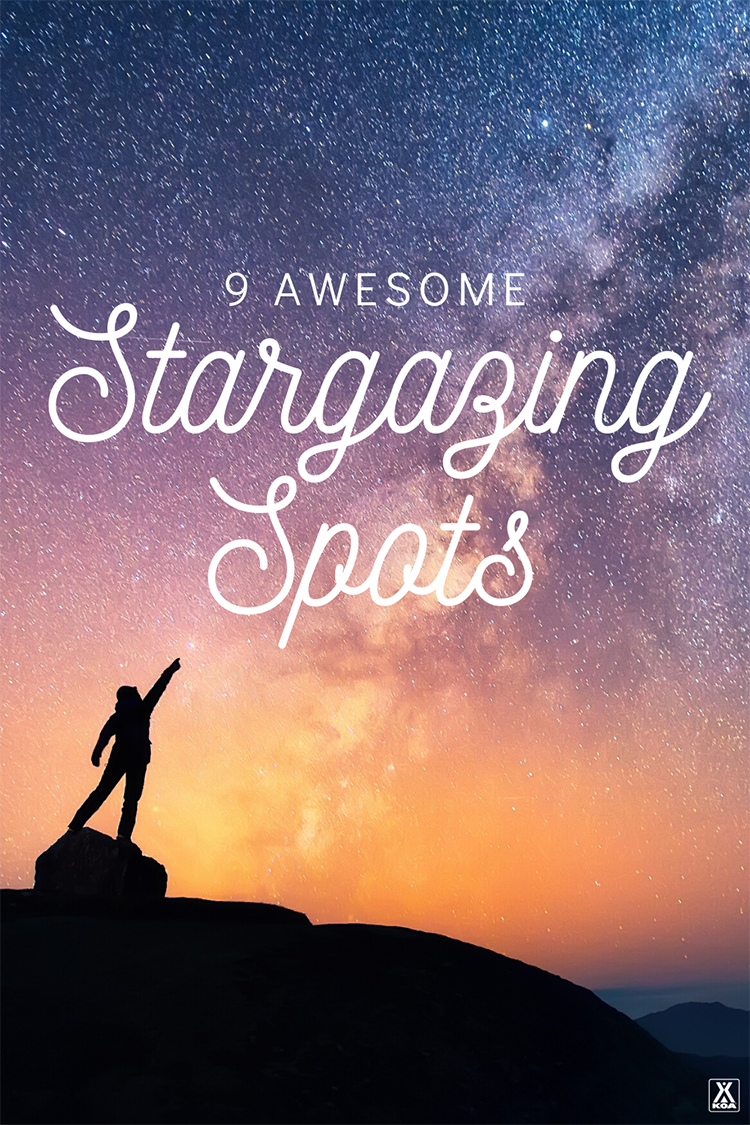