The BioLite CampStove™ Warms Our Hearts 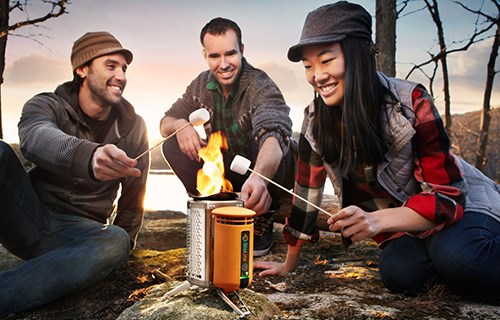 Campfires have been around for — well — forever. So, it would stand to reason that, in the past two million years, man has pretty much figured out every possible way to adapt a wood-fired open flame.

From that first cave dweller who figured out how to contain her fire with a ring of rocks, to your goofy uncle rigging up a giant, pig-ready rotisserie, it’s pretty much all been done, right?

I know this is going to sound a bit far-fetched, but hang with me here. What if I told you this tiny, back-packable stove not only cooks your dinner with the twigs you pick up along your hike, but it will also use that very same fire to CHARGE YOUR SMARTPHONE!

Excuse the shouting, but gee whiz! This is a gadget nut’s dream. A stove that allows you to efficiently heat your meals with abundant renewable fuel, AND produces a never-ending supply of power for cell phones, laptops, lights and anything else you can plug in with a USB. No more hauling propane or other fuel tanks along. No more waiting for the sun to shine on solar cells. This thing can heat your soup and power your Hulu-Plus habit at any time, anywhere in the woods.

Here’s how the magic works. The BioLite CampStove™ takes heat from your twig fire and sends it through a patent-pending thermoelectric generator, converting the heat into electricity. That electricity powers a fan in the unit that sends air flowing back to the fire, improving the combustion and increasing the heat. The extra electricity is stored in a small lithium battery that powers your devices via a USB port. Simply ingenious.

The BioLite CampStove™ came from the minds of design engineers Alex Drummond and Jonathan Cedar, who were intrigued by the problems stemming from half of the world’s population forced to cook using open fires that causes nearly 2 million premature deaths a year.

The two invented their stove, which reduced emissions by over 90 percent while providing electrical access to populations that had no other way to generate power. Their second product, the BioLite HomeStove™, is designed to serve the 3 billion people who have no other way to cook but wood-based fires.

Here’s the cool part. BioLite uses proceeds from the sale of the CampStove™ to help support the one-time market establishment costs for the HomeStove™ in developing countries. BioLite isn’t a charity, but you can still feel pretty good that your purchase of a BioLite CampStove™ is helping the company solve a huge worldwide health issue.

Bottom line is, the BioLite Campstove™ works. It does exactly what it says it does, consistently and cleanly. I had water boiling in minutes, and my iPhone was back to life by the time I had the dishes done.

So, here’s why even a “luxury RV camper” who never gets off the grid may want to consider shelling out $129.95 for this stove:

• No fuel to buy or carry: All you need are the sticks you pick up along your way.
• Charge your gadgets: While you cook, you can recharge your phones, lights and laptops.
• Stay Green: By using a renewable source of fuel, you reduce your carbon footprint and keep tanks out of the landfill.
• Always prepared: This thing isn’t just for camping. What a great solution during power outages or natural disasters. Downed power lines won’t matter.
• Better the world: Buy a CampStove™, and support the developing world’s access to the HomeStove™.
• It’s Just FUN: It’s still a campfire, so feel free to watch the dancing flames or roast the perfect marshmallow.

Where To Find It

Just go online to www.biolitestove.com to learn more or place your order. The cost is $129.95 per unit, plus shipping.

It cooks your dinner while it charges your smartphone. It’s a gadget nut’s dream. Read our warm, fuzzy review about this impressive invention that’s been winning everyong over, including Fast Company, The New York Times and Wall Street Journal, and give us your name to be entered to win one.

For an independent look at the BioLite CampStove™ in action, check out this view on YouTube.

And to see what the “major media” is saying about the Biolite Stove, this company makes it easy. Just go to their press page and you’ll see a collection of links that will take you to stories and reviews from publications like Fast Company, The New York Times and Wall Street Journal, among many others.

Don’t take our word for it, provide your zip code and email address below for a chance to win your very own BioLite CampStove™ for your next KOA adventure!