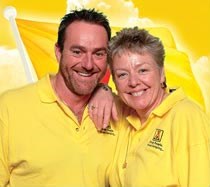 Michael and Kristie Kuper met as teenagers, when he came to work for her father’s RV sales and repair business. Soon the two were working side by side and romance soon followed. In 1981, the same year Kristie’s parents purchased the Thunder Bay, Ontario KOA Kampground, the two celebrated the birth of their first child, Andy. A brother, Kelly, followed a year later.

The Kupers and their children worked together and with Kristie’s parents, expanding and improving the Thunder Bay KOA. Finally, in 1998, they took over the property and have spent the last 12 years continuing to make it a fantastic place to stay.

“Mike and Kristie have poured their heart and soul into their campground, and it shows,” says KOA President Pat Hittmeier. “They have received the KOA President’s Award every year since it was created, and have received our organization Founder’s Award three times. And now, they’ve been selected as our 2011 Franchisee of the Year.”

But at this KOA, like so many others, it really is the people who make the difference.

“The Kupers are real dynamos,” Hittmeier says. “And they know how to make every guest feel special. For instance, the new entrance was something that they created because Michael says his guests deserve to be honored with a grand welcome.”

In addition to their commitment to their guests, the Kupers are also active in their community, hosting many fundraisers for local causes and organizations. Their charitable work also extends to the KOA Care Camps.

“Mike has been the chairman of the KOA Care Camps Trust for three years,” Hittmeier says. “During those three years, more than $1.3 million dollars has been raised—which represents over half of the total amount raised in the last decade. It’s a cause that is close to his heart and to Kristie’s.”

KOA Kampgrounds of the year are selected based on a variety of criteria, including being service-oriented, looking for new ways to enhance every camper’s experience and who are willing to embrace new tools and technology.

“We are so pleased that the Kupers have been selected for this award,” says Hittmeier. “They exemplify what makes KOA camping special.”

Michael and Kristie Kuper received their Kampground of the Year award at KOA’s annual Convention, held November 8-11 in Savannah, Georgia.