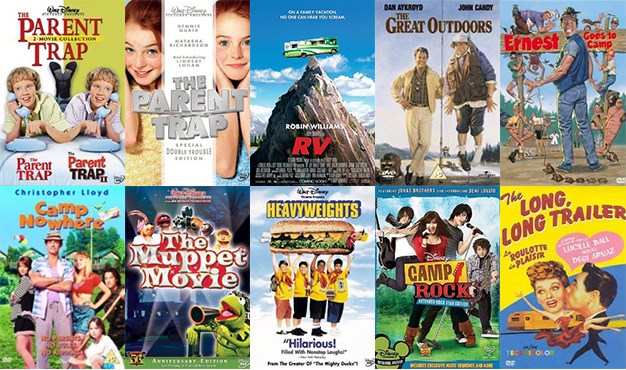 When you’re hitting the road this summer to get in some fun in the sun, odds are you just might be traveling with at least one dvd player in your vehicle—especially if you have kids. Although we’re huge advocates of unplugging to make the most of your outdoor adventures, parents know that sometimes their sanity may depend on popping in a movie to keep kiddos occupied with something other than a game of “Are we there yet?” or “She’s touching me!”

In our own effort to help families across North America, we’ve put together a list of a few our favorite camping-related movies. Choose one or choose ‘em all—you’ll never know which ones will become a part of your family’s camping traditions.

The original Parent Trap made its debut in 1961, starring a spunky blonde by the name of Haylee Mills as well as the classically beautifully Maureen O’Hara and rugged actor Brian Keith. Its split-screen technology was cutting edge, and the story was timeless: twin teenage girls separated at birth discover one another at summer camp and launch a quest to reunite their parents. Listen once to the “Let’s Get Together” song and you’re sure to never forget it. Rated G.

But wait…there’s more! In 1998 Disney brought out a new version of The 1960’s classic, this time starring a cute little redhead: Lindsay Lohan (then blissfully scandal free!) The story (and at least one character) remain the same as the original, this time updated for a whole new generation of kids and campers. Dennis Quaid and the late Natasha Richardson are also wonderful in the roles as Hallie and Annie’s parents. Rated PG.

Combine Robin Williams as a work-obsessed father, a motor home of mammoth proportions and a bicycle that no one can quite explain and you get a whole lot of funny going on. Cheryl Hines, Josh Hutcherson, Kristen Chenoweth, Jeff Daniels and Will Arnett are also fun to watch. Rated PG.

Know what I mean, Vern? Yes, parents may be driven a little crazy by Jim Varney’s Ernest character, but kids can’t seem to get enough of him. In this movie, Ernest is put in charge of some rather resourceful juvenile delinquents sent to summer camp. There’s even a few “do good” messages included for extra measure as Ernest and the kids take on a businessman who is up to no good. Parents and football fans will also catch a glimpse of NFL great Lyle Alzado in the role of mining foreman. Rated PG.

If you don’t want to go to the summer camp your parents pick out for you…why not create your own, with no parents, no counselors and virtually no rules? That’s the premise behind 1994’s Camp Nowhere, which stars Jonathan Jackson (Nashville), Jessica Alba (Fantastic Four) in her big screen debut, and the venerable Christopher Lloyd. Rated PG.

Ben Stiller stars as a Tony Perkis, an obsessed and downright crazy fitness instructor driven to turn a weight loss camp into an over-the-top infomercial. Bad news for him comes in the form of kids and a nice-guy counselor who are ready and willing to show him the error of his ways. Jerry Stiller, Anne Meara, Kenan Thompson and Judd Apatow are just a few of the other well-known faces making an appearance in this summer fun film. Rated PG.

Although occasionally hard to locate, Camp Rock stars Demi Lovato and Joe Jonas (yep—Kevin and Nick also appear). It’s got a great soundtrack, as well as the fantastic message that overcoming your fears can lead you to something wonderful. Rated G.

For kids, this may be one of the ultimate road trip movies and comes complete with campfires, ghost stories, and some pretty awesome cars (1951 Studebaker and 1946 Ford Woodie station wagon). If there’s anyone who won’t sing along with the film’s famous son “Rainbow Connection” we haven’t found them yet! Rated G.

Directed by Vincente Minelli and starring the effervescent Lucille Ball and her real-life husband Desi Arnaz, no camping movie list would be complete without this 1954 favorite. The cooking-while-driving scene is an absolute classic, and anyone who has pulled a trailer up a steep incline will relate to the hairpin turns the couple navigates…although they happen to do it in a Mercury convertible! Not rated.