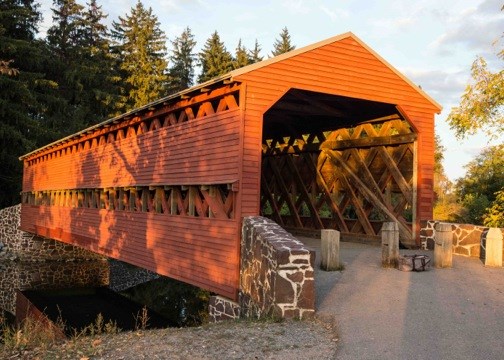 Scary stuff is going on right now at KOA campgrounds across the country.

As Halloween approaches, friendly ghosts and mischievous spirits — from
New England to California — are gathering to celebrate spooky rituals that have become KOA’s autumn traditions. Creepy costumes, walks through mysterious woods and, of course, tricks and treats await any camper who is game.

Who knows what lurks out there in the darkness around family campfires? After all, it’s that supernatural time of year when our imaginations soar, and we love to be frightened. Talk about goosebumps!

In search of year-round ghosts, my husband and I packed up our camping gear and headed to Gettysburg, Pennsylvania. I can’t deny that we were caught up in the excitement of Halloween and stories of haunted Civil War battlefields. Are there really such things as ghosts, and would any communicate with us?

Our hope was to make contact with the spirits of heroic soldiers who died there. We explored the battlefields by day, hung out at a haunted bridge at midnight, cooked up a genuine Civil War dinner, and pretty much stepped back in time.

Our base was the Gettysburg/Battlefield KOA, just a ten-minute drive from the scenes of the most terrible battle this continent has ever known. It was fought over three hot July days in 1863. Fifty-one thousand dead and wounded. Places with names like Devil’s Den, Little Round Top and Seminary Ridge became part of our history and today look much as they did 150 years ago.

It was a war in which men had to cook for themselves. And so it was that my husband sliced, fried and simmered an authentic field recipe of apples, onions and salt pork. And what better accompaniment than the staple that soldiers of both sides carried with them: Johnny Cakes made from corn meal, milk and salt. Easy to make and carry. And filling.

We piled high our vittles on reproduction Civil War messkit that looked authentic on our campground grate and tasted remarkably good.

So, after full days of reliving the battles by car and on foot, it was a quick drive back to the comforts of modern camp life. Our wooded cabin was artfully secluded among the campground’s boulders and terraced landscapes. The wildness of this picturesque environment reminds you of some of the battlefield. Dramatic, yet natural.

When we settled in for the night, I tried hard to stay awake in case a Civil War ghost showed up, but I was always too comfortable to avoid drifting off to sleep. ad to report that we slept undisturbed. Even our dog, Roxy, seemed unaware, though she often seemed unusually quiet.

Legend has it that spirits of dead soldiers roam the fields today and inhabit some buildings in this picturesque town. Stories are rampant about ghost sightings all over the area. In fact, many of the locals, and even some campground staff, will gladly tell you about encounters like these that can’t be explained:

Soft whispering heard in the still of the night. The fleeting touch of a lighter-than-air hand that, maybe, brushes away an unseen danger. An apparition simply minding its own business.

Everyone in Gettysburg seems comfortable with being, well, uncomfortable.

Be sure to take a late night visit to Sachs Bridge, and bring a flashlight as you retrace the steps exhausted Confederate soldiers took crossing this 1800s covered bridge as they retreated on the rainy night after the battle ended. Three soldiers were hanged at the bridge for being spies. And a field hospital choked with the wounded and dying was just a few yards away.

Skip the tours and dare to venture there, instead, with family and friends. Hold onto each other as you quietly move along the wooden planks of the 100-foot span. Some people report sightings of ghostly figures in ragged military uniforms rising from the surrounding meadows. Others swear the forms are just misty air. But look out for the ghost that people call ‘Tennessee’ who, sometimes on demand, will puff a lighted cigarette balanced on a wooden beam for his pleasure.

As I think about our Gettysburg experience, I reluctantly admit that we didn’t meet any ghosts or make friends with a demon. But what we saw on the battlefields and learned about the soldiers will certainly haunt me forever.

Jennifer Grambs is a journalist who has published three books about traveling in the United States as part of the American Traveler series. Jeff Grambs is a photographer with a website at GrambsPhoto.com and former broadcast news writer.