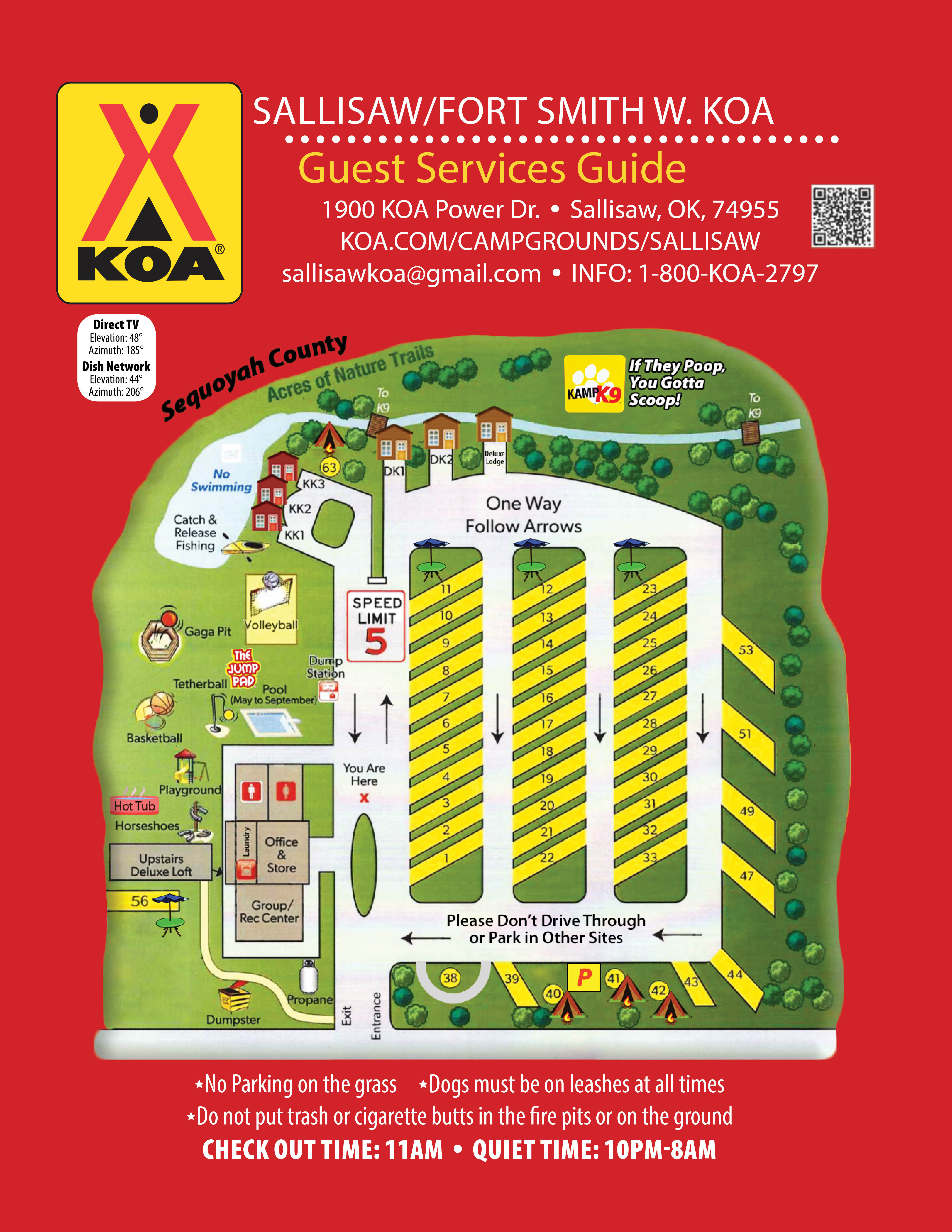 Eastern Oklahoma has so much to offer! From hiking to waterskiing, shopping to casinos, museums to trail riding, come enjoy what you love or try something new. Use the Sallisaw/Ft Smith W KOA as your base camp for a great vacation or even a single excursion before you head out on your journey! Check out all the possibilities:

Admission is free. Closed Monday and State Holidays. Exhibits here illustrate the history of the Cherokee from 1600 to 1907 and the development of Sequoyah's syllabary. Visitors are taught the use of this Cherokee alphabet and given a computer printout of their names and common greetings in Cherokee.

From the establishment of the first Fort Smith on December 25,1817 to the final days of Judge Isaac C. Parker's jurisdiction over Indian Territory in 1896. Fort Smith National Historic Site preserves almost 80 years of history.

Explore life on the edge of Indian Territory through the stories of soldiers, the Trail of Tears, dangerous outlaws, and the brave lawmen who pursued them.

The visitor center has evolved over time. Beginning in 1846 it was the enlisted men's barracks and dining hall. In 1872, it was converted to a courthouse and jail. A second more modern jail was built in 1888. The last major change occurred between 1996-2000 when the buildings were renovated and exhibits added making the building accessible to all visitors. The visitor center helps tell the story of Fort Smith from 1817 to 1896.

Visitors can be reminded of one of the most chaotic eras in the history of Fort Smith, Arkansas with a visit to the barracks/courthouse, jail and restored gallows of the "Hanging" Judge Isaac C. Parker. Located in downtown Fort Smith, it is just a short drive of 23 miles.

Cherokee Village provides you the chance to experience Cherokee life in the early 18th century and features 19 wattle and daub structures, 14 interpretive stations, and a detailed historic landscape set on four acres of land adjacent to the Cherokee Heritage Center. Visitors witness daily life as they are guided through the interpretive stations where crafts are demonstrated, stories are told, and Cherokee lifeways are explained.The overall village includes eight residential sites, each with a Cherokee summer house and winter house, a corn crib, a “kitchen garden” and additional landscaping. The public complex consists of the primary council house and summer council pavilion overlooking a large plaza that served as the center of community activity. In addition, two recreation areas featuring a marble field and stickball field showcase the Cherokee games that are still played today.TRAIL OF TEARS EXHIBIT A permanent exhibit explores the forced removal of Cherokee from their indigenous territory to the “Indian Territory," present day Oklahoma. The exhibit is staged in six galleries, each of which, through documentation and artifacts, concentrates on specific aspects of Cherokee history and culture.

Many attractions, restaurants, and shopping abound in Eastern Oklahoma. If you can stay an extra day, a trip south through the Talimena Scenic Mountains is awe- inspiring.

The refuge provides habitat for water fowl and other migratory birds. It also provides food and cover for resident wildlife. This attractions is located three miles South of I-40 at the Vian exit.

Ride in style on a meticulously restored antique passenger cars, a first-class parlor car or the 1940s Caboose, Lil' Toot. Relax as you wind through the river valleys, traverse high trestles, and cut into a quarter-mile tunnel. Their friendly and fun-loving conductors will enhance the journey with anecdotes about the area's rich history, while tending to your safety and other needs. If you are young or young at heart and ready to experience the scenic foot hills of the Boston Mountains, don't miss this opportunity to travel in the style of a bygone era. Sorry, they cannot accommodate pack mules or pet chickens on their train rides.

Fort Smith offers travelers of all ages glimpses into its distinctive past through restorations, attractions, museums, and festivals that make its history fun and exciting. Now an energetic city of 80,000 people, Fort Smith is known for accommodating visitors with a blend of "southern hospitality" and "western openness" -- anxious to share its past while busily planning for the future. Downtown Fort Smith is an easy 23 miles from Sallisaw.

Oklahoma's only archaeological park, is a 150-acre site encompassing 12 southern mounds which contain evidence of an Indian culture that occupied the site from 850 A.D. to 1450 A.D.The Mounds are considered one of the four most important prehistoric Indian sites east of the Rocky Mountains. They were dubbed the "King Tut of the Arkansas Valley" by the Kansas City Star in 1935.  The Spiro chiefs controlled trade between the vast reaches of the plains and verdant southeast woodlands.  Other area villages recognized certain Spiro residents as political and/or religious leaders.  They directed everyday farmers in the building of mortuary houses where the bodies of the high-ranking dead lay.Many exotic religious rituals at Spiro centered upon the death and burial of elite members of the Spiro society.  Other ceremonies included the celebration of planting, harvesting, and the changing of seasons.The Park and Interpretative Center allow the visitors to acquaint themselves with the lifestyle of these prehistoric Indians through artifacts, displays, interpretive displays, period home, reconstructed mounds, and unexcavated mounds.
Free admission (donations accepted).

The Main attraction of the War Memorial Park is USS BATFISH submarine.

We have so many antique shops to choose from, we guarantee you won't have time to hit them all. Stop in the store for a list of names, addresses, phone numbers and hours. We make it so easy!

Enjoy the rush of a win at Cherokee Casino Sallisaw, the newest addition to the Cherokee Casino family. Now you can play your favorite electronic and table games at the intersection of U.S. Highway 59 and Interstate 40. The $6.6 million, 22,000 square foot casino holds 256 Vegas-style electronic games and six table games. When you tire from all the winning, re-energize yourself at the delicious Back 40 Bar & Grill, which doubles as a live entertainment venue. Just 3/4 mile from our KOA.

The Shadow Creek Golf Course & Country Club in Sallisaw is an 18 hole, par 71 public golf course with bent grass greens. The average greens fee including cart is $25 during the week and $30 on the weekend. They do have a pro shop and golf carts available.

Robert S. Kerr Reservoir, located in the picturesque Cookson Hills country, lies on the Arkansas River about eight miles south of our KOA. With its many arms formed by tributary valleys, Kerr Lake has 250 miles of rugged, irregular shoreline. Observation decks at the visitors' center offer an excellent view of barges and pleasure craft passing through the lock on the McClellan-Kerr Arkansas River Navigation System. Hunting areas lie on either side of the Sequoyah Wildlife Refuge, established in 1970. The Corps of Engineers also manages 10,790 acres of project land around the lake for public hunting. The area offers eight public-use areas and numerous hiking and nature trails. Facilities include boat ramps,  drinking water, group shelters, restrooms, swimming beaches, change houses, electric outlets and concession services. Shoreline length: 250 miles.

Located along the railroad tracks in Sallisaw, the 14 Flags Museum honors Oklahoma's colorful history and influence by 14 separate nations. The museum is broken down into three cabins and a train depot. The oldest property is the Lattimore Cabin, which was built in 1835 by Samuel Lattimore and is a unique survivor of the turbulent Civil War years in Oklahoma. This structure is made from hand-cut logs and features a small window on the east side that residents could fire a weapon through.The secondary cabin was built by Judge Franklin Faulkner sometime during the 1840s. Faulkner married a Cherokee woman and was forced to migrate into Oklahoma on the Trail of Tears. The 14 Flags Museum also features artifacts from the Trail of Tears in a separate cabin. The last building is the Old Sallisaw Train Depot, which reminds people of the huge influence the train had on the town and the state.The 14 flags flown over the museum are the royal standard of Spain circa 1541, the great union of Great Britain circa 1663, the royal standard of France brought to Oklahoma in 1719, the standard of the Spanish Empire over Oklahoma in 1763, the standard of the French Republic in 1800, the United States flag circa 1803 and 1818, the flag of Mexico, the flag of the Republic of Texas, the lone star flag of Texas, the Choctaw flag, the confederate battle flag, the first Oklahoma flag in 1911 and the present Oklahoma flag designed in 1925.

The Sallisaw Sports Complex opened in May 2016.  The modern sports complex sits on 130 acres and offers first class playing fields for both baseball and softball. Each quad has its own concession and restroom facilities.   The complex is operated by the Sallisaw Youth League under a contract with the Sallisaw Municipal Authority. There are often state tournaments held at this wonderful facility.

There are Hiking/Mountain bike trails on the northern edge of Brushy Lake.  The trail loops are one mile and three mile loops. A beautiful setting where you can enjoy the water of Brushy Lake and the wooded area of Brushy Park.

The City of Sallisaw has a cute park with a paved walking/jogging trail, small pond, playground, covered picnic tables and restrooms. In addition, there is an 18 hole disc golf course located at Jay Reynolds Park.  This course was built in December of 2015 and offers disc golf enthusiasts a challenging course.  Whether you are an expert or an amateur, you will enjoy the challenge of the course.