In accordance with the shelter in place order we are following CDC recommendations and have closed recreation areas, public bathrooms, tenting and cabin facilities. Our grocery store, Laundry facilities and propane are available with social distancing for your convenience. Reservations can be made online or at (707)763-1492. We look forward to being your place to shelter in these trying times. 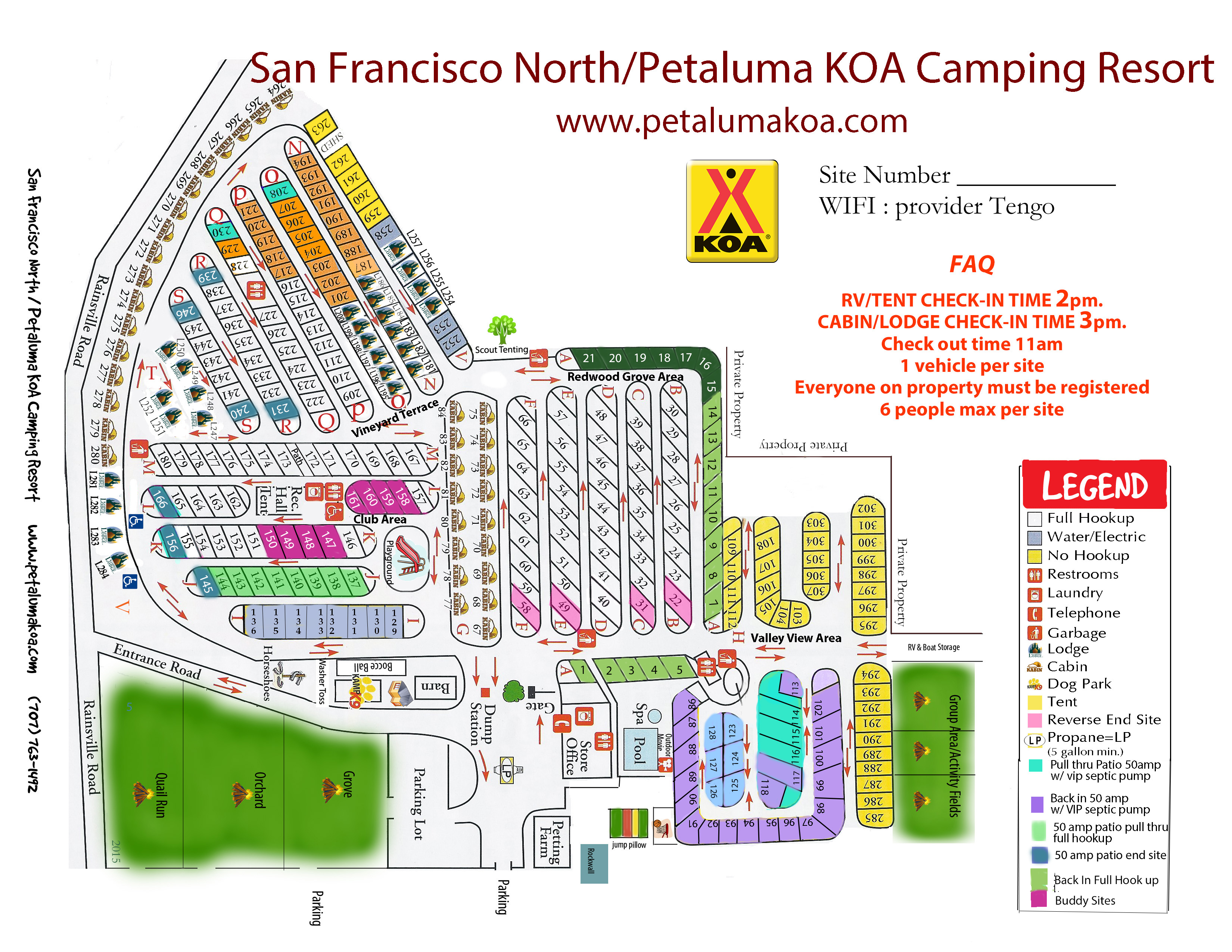 US 101 at Exit 476 - Penngrove. Most Northern Petaluma exit. Proceed to South/West side of freeway. Right turn on Stony Point Rd and Left on Rainsville Rd. See you Soon

Come enjoy California's newest and largest Indian Casino.  Located minutes from our camping resort you can enjoy all the glitz and glamour of Las Vegas then return to the serenity of our beautiful RV Resort!  The Graton Resort and Casino features 340,000 sq feet of gambling, including 12 restaurants and bars.  Visit www.gratonresortcasino.com

You will find just the right gift at one of the fantastic outlet stores. From premium designers such as Liz Claiborne, Coach, Brooks Brothers, Off Saks, BCBG, Banana Republic, Gap, Carters, Aeropostle, Sun Pacific to home décor and Gourmet kitchen necessities, it's all here at the Premium Outlet Mall.

The Smart Train is easily accessible at the Petaluma downtown station. Tickets can be purchased online or at the Smart Train Depot. The Smart Train features free wifi, charging at your table, a snack and beverage cart for your convenience and you can bring your bike. The smart train takes you to downtown San Rafael were you board a quick hop in a bus to the Larkspur Ferry. While on the Larkspur Ferry you will have a great view of the Golden Gate Bridge, Alcatraz, Treasure Island and San Francisco! The ferry building features amazing waterfront restaurants, shopping and is a short walk to Pier 39. You can also purchase and catch tours of San Francisco at the ferry building.
I personally have taken the Smart Train to San Francisco and it was simple, almost as quick as driving (and a whole lot cheaper and without the parking hassles) and was a great way to see the bridges and an amazing view of the city. I would recommend taking the train before 10 am to be able to maximize your time in the city.

A peaceful drive leads to some of the most beautiful coastline California has to offer. Enjoy Fishing, or buy some fresh cracked crab straight off the boat. Spend the day with your toes in the sand then have a scrumptious dinner at one of the many waterfront restaurants! Come build a sand castle!

Sonoma and Napa Valley are a golfer's paradise. Bring your clubs and enjoy Siverado Country Club, The Chardonnay Club, Rooster Run and Fox Tail Golf course just to name a few. Golf Courses range from PGA to Municipal courses. A driving range is located 2 blocks from the campground entrance!

Spend a fantastic day touring through beautiful vineyards and unforgettable landscapes. Both Napa Valley and Valley of the moon offer wine tours, boutique shopping fabulous restaurants and everything you need to make an enjoyable excursion. Wineries host jazz festivals, a mustard festival (with world renowned wine auction), art exhibits and wine maker's dinners. We will be happy to make additional suggestion upon your arrival.

Blue and Gold Fleet at Pier 39

The only San Francisco Bay Cruise that sails under both the Golden Gate and Bay Bridges. The only 1.24 hours scenic cruise with super close-up views of Alcatraz..

Tours available in six languages. Reservations need to be made ahead of time by calling (1-415-705-5555). www.nps.gov/alcatraz/

Take a self-guided walking tour of the A Street Historic District, a six block area near Petaluma's historic downtown and Civic Center. View architectural styles stretching from 1860 to 1925. For more information please call Petaluma Historic Library and Museum at 1-707-778-4398 or Heritage Homes of Petaluma at 1-707-762-3456.

Art, Wine, Shop and Dine in our Riverfront Town

When you take the SMART Train and Ferry to San Francisco the journey becomes as great as the destination.  Great open air bus tours are available at the ferry building and pier 39 is a short stroll from the ferry building.
Several wine country tour companies will be happy to pick you up at the campground and show you all the sites of the Sonoma and Napa Wine Country.
If Beer is more your style then take one of the many Beer tours showcasing the amazing Sonoma County craft breweries.   Then again Lagunitas Beer sanctuary, 101 North Brewery and Hen House Brewery are minutes away from the campground.

More than fifty years of aviation represented by Aircraft and Artifacts on display. Founded in 1989, the Pacific Coast Air Museum is a non-profit organization dedicated to promoting the acquisition, restoration, safe operation and display of historic aircraft, preserving aviation history, and providing an educational venue for students and the community. Kids of all ages are wowed by a day to this museum. www.pacificcoastairmuseum.org

One of Americas favorite sticker companies is located right here in Petaluma, CA. Take a tour of the sticker factory and get ideas for your next scrapbooking project .

A short drive leads you to a relaxing day of fresh crab, kite flying and walking on the beach. Let you cares fade away as the wave hit the shore. Watch the fishing boats bring in the daily catch and enjoy fresh crab and San Francisco Sourdough. Enjoy some barbequed oysters, a locals favorite! Waterfront restaurants and souvenir shopping are available up and down the coast.

Enjoy a fabulous day whale watching at the nearby coastal beaches. Let us help you plan your daily excursions.

View amazing works of art at the many art galleries of the Historic Downtown area.

Visit the home of Snoopy and Charlie Brown. See how the Charlie Brown Chronicles came to be. After enjoying Charlie Brown's adventures spend the afternoon ice skating at the Snoopy Arena.

The Lagunitas Brewery and Beer Sanctuary is home to amazing craft beers, tasty food, live music and a fun place to hangout.  The sanctuary is both dog and kid friendly and located minutes from Petaluma KOA.  Check out the website for live music and event schedules.
This is a really fun place to spend a day relaxing in the sun with friends and family.You're here because you wanna know how it started and how the whole thing came to be. Well, you could say that it all started from a ruined dinner…It was Northern California 1993. Tony Magee started brewing on a stovetop homebrew kit and, after a couple batches, some stray wort had spilled down the back. When Thanksgiving night came, and the wort caught fire and burned the turkey to a crisp, Tony's wife Carissa kindly asked him to move his new hobby elsewhere.  He moved into an old storage shed in the town of Forest Knolls, Calif. (next to the town of Lagunitas, which Tony thought had a cool-sounding name…) and he started brewing more and more. The beers ranged from vile and repugnant, to delicate and exceptional. And then came IPA, and he knew he could never go back. Eventually, Tony grew out of that space and moved just down the road to Petaluma, bringing his recipes and the Lagunitas name with him. Now, Lagunitas beers are available in 20-ish countries and growing. And whether supporting local communities by turning beer into money for the cause, or simply fueling stories and songs with IPA and other fine ales, we've learned one thing (aside for how to cook a turkey)… Wherever you go: beer speaks, people mumble.

A renegade approach and a love of the land inspired our Founder Nan McEvoy to purchase this 550-acre sprawling ranch in West Marin County in 1990.Inspired by her love of Tuscan olive oil, Nan engaged Dr. Maurizio Castelli, a leading authority on agriculture, to recommend the best olive varieties for our unique setting. Fast-forward twenty years and McEvoy Ranch is one of the preeminent leaders in certified organic, extra virgin olive oil. A favorite of chefs – both at home and in restaurants that favor the farm-to-table approach.
Beginning with the 2010 vintage, we handcrafted limited-edition wine offerings showcasing the impact of the Petaluma Gap's breezes and our distinct soil. In keeping with our history, we grow several Mediterranean varietals in addition to Pinot Noir and Viognier.   The first twenty-five years were amazing. We are just as excited for the next chapter in our never-ending story.
Schedule a Ranch Tour, Private tasting or simply take in the beauty of this special facility.We offer two ways for you to be mesmerized by the beauty of our property and to learn more while tasting wines and olive oil. Select from a weekend morning tour (reservations required) or a private walkabout tour by appointment only. Choose what suits your schedule. We guarantee it will be wonderful.For reservation inquiries, questions, or changes, contact us at 707.769.4138. If after hours, we will return your call the following day.