Off-Season Phone Hours:
Monday 10AM to 3PM
Tuesday 10AM to 3PM
Wednesday 10AM to 3PM
Off-season phone hours are limited. If you can not reach us via phone, please email us at [email protected] and we will return your call the next time that we are in. Thank you! 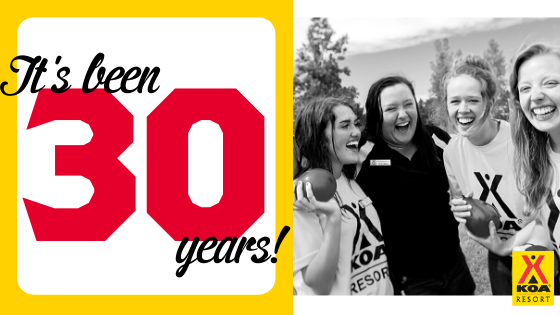 It’s a new year, and with the start of a new decade as a hot topic in the media, it raises the questions: What was the Port Huron KOA Resort like 10 years ago? 20 years ago? 30 years ago? What have we changed in the last 10 years? What are some of the best renovations and ideas? As you can imagine, everyone has their own opinion, so I talked to some of the managers and the owner to compile a list of things we’ve added and improved over the years.

In 1988, Howard Stein first tried to purchase the Crazy Horse Campground but was unsuccessful in his attempt.

1990 – Howard Stein was successful in purchasing the Crazy Horse Campground. The campground was purchased in January of 1990. Howard then met with Jim Finch, a KOA corporate employee in charge of site design and expansions, to discuss what renovations and upgrades would be needed before the campground could transform into a KOA.

JUNE 1ST, 1990 – Port Huron KOA flew the KOA flag for the first time and became a franchise of Kampgrounds of America!

When the campground was purchased in 1990, the only buildings that existed were:

- The front pool closest to the Front Store was also in the campground at this time.

- The campground originally started with just 7 employees, all dirt roads and a small trailer where the Guard Shack is, for easy check-ins!

- If you think those things are CRAZY, take a look at the pricing list I attached to see what the prices were like in 1990. Look closely to see if you recognize someone in the background. Times were certainly different then.

1992 – beginning of Sawmill City, Western Store and the train we still love and use today

- January 5th, 1992 – General Manager, Anthony Nelson, and Owner, Howard Stein, took a 3 week trip to Texas to pick up the train from the Dallas Zoo! The train, built in 1975, is the original train that we still drive on the campground today. Maybe that puts some peace of mind to the fact that we can only run it every so often - SHE’S OLD .

- The history of the western store is one of my personal favorite stories. Owner, Howard Stein, has always been a fan of the old out west (remember earlier when I said look closely to the background of the pricing picture?) Most of the campground has little details, like road names and photos, that all came from the area of Billings, Montana! When it came to planning out the Western Store and Mad Dog Saloon, this was no exception. Howard met with old friend, Tom Kinney, in 1992, to discuss the plans over lunch. They took some ideas from a book Howard still owns today: Ghost Towns of the West. The layout for the Western store was drawn out on a napkin down at the Pioneer Bar and Grill and they began the actually planning shortly after!

1993 – The Bumper Boats were added at Sawmill City

1994 – The Go-Kart track was added to Sawmill City

- Fun Fact – Our go-kart track was recognized twice in a National Magazine because of the curved gates it has to lead the karts into the pit.

1998 – The smaller wading pool that is alongside the original pool was built.

2006 - The first group (6) of Lodges was purchased and added to the campground. If you take a look at a map, they were originally placed on Sites 18-26!

2007 – The construction of Lodge Lane began and 13 Lodges were added.

2008 – We packed up the original 6 lodges and moved them back to Lodge Lane.

2011 - The Front Office was completely renovated and redone to create a better experience when checking into the campground.

2013 – Port Huron KOA was branded a Resort and was the first resort recognized in the KOA system!

These are just SOME of the early renovations and additions in the campground. In the last decade, we have added :

-The Water Slides at Sawmill City

It’s amazing what can happen in just 30 years! The Port Huron KOA Resort has grown immensely since its purchase in 1990 and we are so glad that we have people here supporting us, some who have camped with the campground LONG before it was even purchased by Howard. As the new year begins, we encourage you to think about and share some of your best memories at the Port Huron KOA Resort!

I would like to say a special thank you to Erin Phipps (Front Office Manager), Anthony Nelson (General Manager) and, of course, Howard Stein (Owner of the Resort) for helping me with this blog post!

Happy New Year everyone! We are so excited to see what this year and decade offers for our campground!