SOUTHBOUND ON I-95: Take Exit 17 turn right @ the stop light Drive 2 tenths of a mile & make the 1st left hand turn onto Kenric Drive. Drive 2.5 miles and the park entrance will be on the right. Our KOA Billboard is at our driveway entrance.
NORTHBOUND ON I-95: Take Exit 13-A to I-74 E toward Wilmington Drive.3 tenths of a mile, Take Exit 210 to Alt-74 . At stop Light turn left & follow KOA signs, turn right onto Kenric Rd @ the SunDo gas station, the park entrance is on the left.Our KOA Billboard is at our driveway entrance.
RESERVATION & CANCELLATION POLICY: To guarantee your site for short term stays, a deposit equal to @ least your first night will be charged to your CC at the time of reservation.  If you need to cancel a reservation, please call (910)739-4372 during office hours, before the deadlines below. ALL cancelations made within KOA's national cancellation policy of 48 hours must notify your KOA by 4:00 pm two days before your scheduled arrival date, ALL cancelations made within this time period will be charged a $10.00 cancellation fee.  Text & email do not apply.  This applies to RV & TENT Sites.  Reservations made within 48 hrs. of arrival date require Non-Refundable deposits.
VISITOR POLICY: All visitors must stop @ the Office before entering the park to register and pay the required visitors fee & to receive a valid parking pass.
REFUNDS: NO refunds for early departure after initial registration. Rain checks may be available for remaining night for current season
SPECIAL EVENT WEEKENDS- are NON-REFUNDABLE per our campground policy. 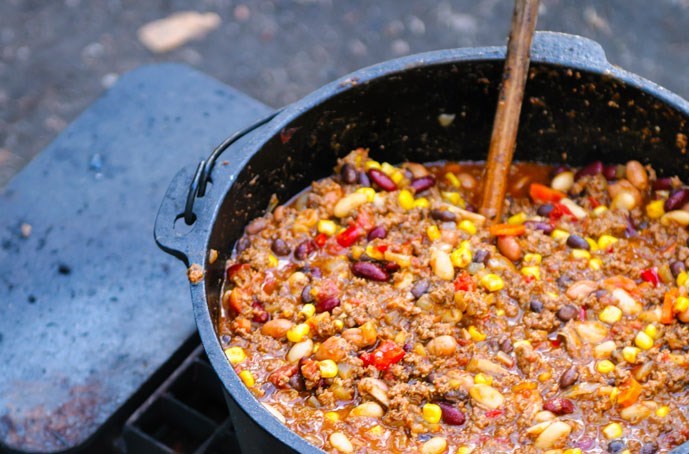 Do you smell that? It’s the time of year when the air gets a bit crisper, leaves start changing and smells of spice, apples and pumpkins feel the air. Yep, it’s Fall, and it’s one of our favorite times of year.

Separate cinnamon rolls. Unroll first layer of rolls and insert cooked bacon, reroll over bacon pinching the dough together to seal it up. Bake for about 15 minutes, watching to make sure the tops are golden brown. Make it even more a taste of Fall by incorporating Pumpkin Cinnamon Rolls instead!

Is there anything better than warming up to a heaping bowl of chili? This easy recipe is sure to warm you up without letting you down. Use your Dutch Oven to make this over the fire.

Fall is fantastic for camping in North Carolina. These quick recipes will be a sure hit to make your trip even better. Enjoy!

Tent Sites, Tent Sites Must have a reservation