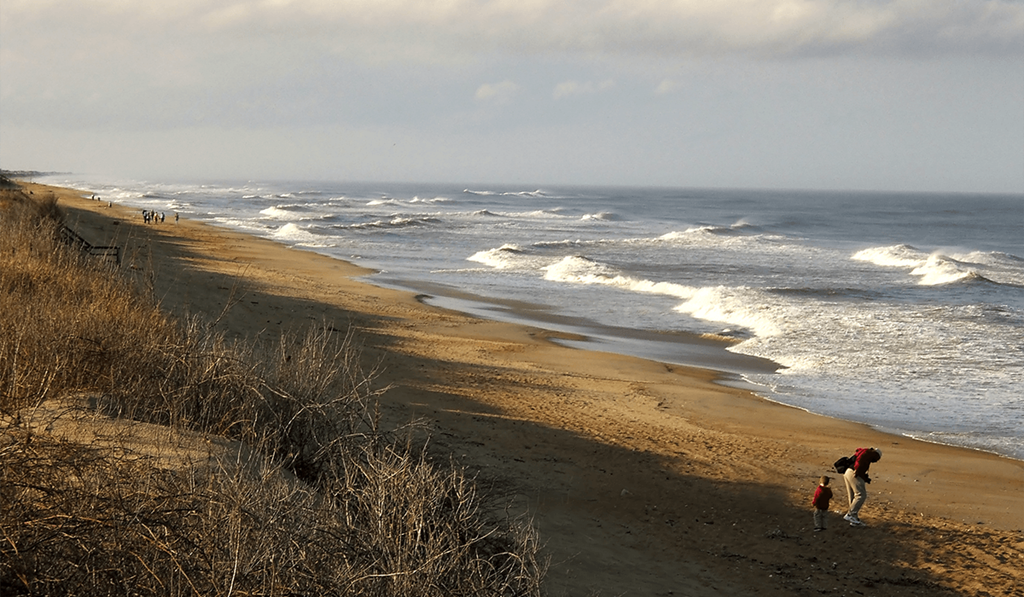 From rum runners smuggling booze during Prohibition to German U-boats, many vessels have sailed the North Carolina coast, and many have met their end, leaving thousands of Outer Banks shipwrecks in their wake.

The convergence of the Labrador and Gulf Stream currents off the Outer Banks coupled with the region’s extreme hurricanes make the waters off the Carolina coast treacherous.

Here are a few facts you may not know about Outer Banks shipwrecks and some tips for seeing a few yourself.

1. Shipwrecks May Be Behind Corolla’s Wild Horses

The northern end of the Outer Banks is home to a herd of wild horses known as Banker horses. These beautiful creatures are descended from Spanish mustangs, and there are vicious stories about how they came to live on these barrier islands.

Some say that Spanish explorers visiting the area in the early 1600s had to abandon their livestock for one reason or another, leaving the horses behind to become feral. Others believe that the Banker horses are descended from Spanish mustangs who survived shipwrecks and swam ashore.

Regardless of how they came to live on the Outer Banks, these beautiful horses are a must-see when visiting Currituck County.

2. Even Blackbeard Was No Match for the Outer Banks

Blackbeard, aka Edward Teach, is one of the best-known pirates in history, but many don’t know that Blackbeard lost his flagship and his life along the North Carolina coast.

In May of 1718, Blackbeard’s flagship Queen Anne’s Revenge ran aground in Beaufort Inlet, about 60 miles south of Ocracoke Island. The wreck was lost to the sands of time for over 200 years but was discovered in 1996 by a private salvage firm.

Shortly afterward, in November of 1718, while entertaining guests on his ship Adventure, Blackbeard was cornered by two sloops hired by Virginia Governor Alexander Spotswood in the Pamlico Sound off Ocracoke Island. A battle ensued and Blackbeard was killed. It’s believed that Blackbeard’s body was buried in a mass grave on Ocracoke.

Many think of World War II as a conflict that primarily took place far from American shores, but for residents of the Outer Banks, the war was much closer.

U-boat attacks occurred up and down the East Coast and in the Gulf of Mexico during World War II, but the greatest concentration of them occurred along the Outer Banks. So many attacks occurred in the waters off Cape Hatteras that it earned the nickname Torpedo Junction.

Eighty-six allied vessels and four German U-boats were lost off the North Carolina coast during the war.

One well-known U-boat wreck was the U-85. On the night of April 14, 1942, the USS Roper detected the U-85 running along the surface within sight of the Bodie Island Lighthouse. The Roper fired and sank the U-85. It was the first enemy submarine sunk in U.S. waters in World War II. The wreck still lies off Coquina Beach on Bodie Island today, 18 fathoms deep.

There are several Outer Banks shipwrecks that are easy to glimpse. The Lois Joyce is one such vessel. This 100-foot commercial trawling vessel was lost in 1981 while trying to enter the Oregon Inlet during a storm. At low tide, you can see the wreck at the mouth of the inlet.

Head down to Pea Island National Wildlife Refuge in Rodanthe and you might catch a glimpse of the federal transport steamship Oriental’s boiler and smokestack in the surf.

If you’ve got four-wheel drive, you can check out the wreck of the G.A. Kohler. A hurricane pushed this four-masted schooner ashore in 1933, and the wreckage can be seen at ramp 27, 4 miles south of Salvo.

If you’d rather see shipwrecks by air, book a flight in a Cessna with OBX Airplanes, and they’ll fly you over some of the wrecks along the coast in Kill Devil Hills. Plus, you can see Nags Head, Kitty Hawk, Manteo, Oregon Inlet, Bodie Island Lighthouse and the Bonner Bridge from the air.

The Graveyard of the Atlantic Museum in Hatteras is a must-see for anyone interested in maritime history. See artifacts from shipwrecks, learn about the history of diving and take a deeper look into the history of the Outer Banks at this informative museum.

Plus, you can see the remains of an actual shipwreck right outside this Hatteras Island museum. The wreckage of the Laura A. Barnes sits just to the left of the museum’s entrance. This rudder schooner was wrecked off Bodie Island in 1921. It ran aground after sailing through fog, high seas, wind and a strong tide. The wreckage was later moved to the museum.

Whether you’re a fan of pirates, a World War II buff or a lover of maritime history, the Outer Banks shipwrecks and their fascinating history are sure to pique your interest.