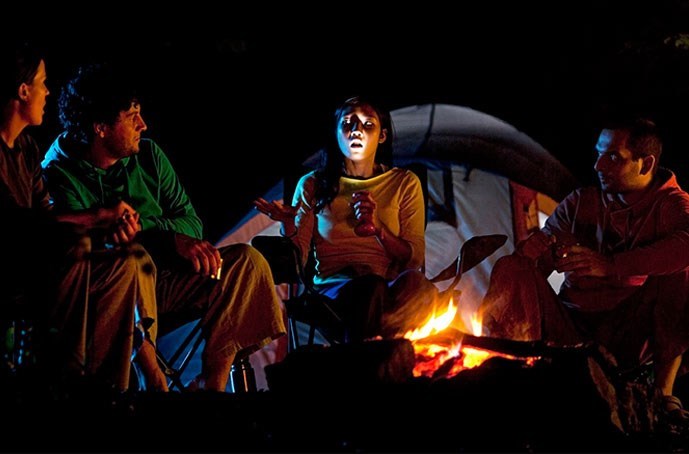 ‘Tis the season for stories that go bump in the night! Try these not-so-scary stories to spook your kids this Halloween.

Halloween is all about a little bit of scare, right?

Well, okay, maybe it’s more about getting plenty of candy first and then getting ready to be seriously spooked. And what better time to have fun eating candy and spooking than when camping during the Halloween season?

While we are all about spooky stories that lead to sleepless nights, when you’ve got kids with you, chances are good you aren’t feeling quite as thrilled about the idea of them staying awake all night long, too afraid to sleep. We have done some research, however, to find you some fun stories that will give your kids a bit of a scare, but not have them screaming in true terror.

So grab your candy, light a campfire, and get ready to scare.

If your kids are fans of pirates, they are going to love this spooky Dem Bones story.

It tells the story of the famous Captain Kidd and his pirates who bury their stolen booty off the coast of New Jersey, and the people that witness this burial.

This story is scary enough to get your little ones looking behind their shoulders, but not enough to send them into a fury of screams.

Similar to the tale of Cinderella, Cow’s Head begins with a daughter, Oksana, whose father is married to an awful stepmother with an equally awful daughter.

Times get tough, and there isn’t enough money to feed the family of four. The stepmother suggests sending Oksana away to the woods to fend for herself, and her father agrees.

Oksana is able to survive on her own, and one night, is awoken by a knock at her cabin door. She opens the door to a spirit — a cow’s head, to be exact. The cow demands hospitality from Oksana, and you’ll have to read the story to find out the rest.

There’s a good lesson to be learned here, with a bit of spook mixed in.

Looking to recover an overly scary story with something a bit more mild? Haunted is the perfect one. This tells the story of ghosts who love to bake and dance the night away.

When a family moves into the home, they struggle with these noisy ghosts, and find a happy way to get rid of the haunts forever.

This story leans a bit more to the creepy side that won’t make your kids scream, but will likely give them (okay, maybe just us) goosebumps.

Yellow Ribbon follows the story of a young couple, Jane and Johnny as they fall in love. But for some reason, Jane always wears a yellow ribbon around her neck, and always evades answering why whenever Johnny asks.

Finally, their love grows and they marry and have kids. Jane falls sick and, while on her deathbed, finally tells Johnny he can untie the ribbon.

What he finds when he does will surprise the daylights out of you and your kids.

Let your kids be the judge of whether this scarecrow was taken by the storm, or ran away on his own.

This one is fun to tell in the first-person, and will keep your kids feeling spooked after the story is over.

But don’t worry, this isn’t a story they should lose sleep over.

Though certainly strange, this story is a fun one that isn’t going to scare your little ones too much. It is about an old woman who finds a hairy toe in the woods near her home, and decides to eat it.

Our question, after hearing the story remains — why did she eat the toe in the first place?

We don’t have an answer to that, but do know that your kids will enjoy the fantasy aspects of this campfire story.

THE LADY WITH THE EMERALD RING

This strange story of love brings a woman back from the dead, all thanks to her husband’s greed.

Quick and scary for a moment, but with a happy ending, your kids will have fun listening to The Lady With the Emerald Ring.

Another one for the pirate lovers in your group, the Ghost Ship of Captain Sandovate tells the tale of a group of sailors who mutiny, and end up dehydrating their captain to death — they refused to give him the water he needed to survive.

Under the guise of the new captain, a terrible storm took place that sunk the ship, and it is said that the ghost ship travels throughout the Atlantic, its sailors begging for water.

This story has some good morals in it, and won’t scare your kiddos too much.

An eerie feeling will come across you and your kids when hearing this story.

A man and a woman were traveling home via carriage, when they realized they had to stop for the night. They stopped at a house in the woods where a nice man and his wife welcomed them in to stay.

In the morning, the travelers left on their journey, and left a fifty-cent piece on the kitchen table as a thank you. When they got to the next town to eat lunch, they discover something very spooky.

This story will keep your kids on the edge of their seat, but not keep them awake all night.

The greedy man in this story will serve as a great scare, as well as a great lesson for your kids.

The man of the Golden Hand finds himself trying to court the widower who lost her hand, and replaced it with a golden one. He is finally successful, and marries her, then immediately begins poisoning her in order to have the golden hand to himself.

He is successful in killing her and does get her golden hand, but pays a big price for it.

This classic story about two lovers will have your kids scared, no doubt.

A girl and her boyfriend take a trip down Lover’s Lane for a little late-night kissing, and keep hearing warnings on the radio about a man that escaped the mental asylum who has a hook for a hand. The stories scare the girl, and as she’s trying to convince her boyfriend to take her home, they feel the car shake.

They don’t see anything, and head on home. What they find out when they arrive will have your kids screaming (but not too much).

As most ghost enthusiasts know, spirits often walk the earth because they have unfinished business. Underpants is the story of a ghost who’s trying to tell his living wife something very important. At first, she’s too frightened to speak to him. The hilarious ending makes this story perfect for children of almost any age.

If you’re going to be camping, it’s always good to have a scary bear story up your sleeve. This is the tale of some villagers tracking down a man-eating bear. Let’s just say, when facing down a ferocious beast, it’s easy to lose your head.

Bear Hunting includes some grisly details, but the funny ending ensures your kids won’t be too scared.

A creepy tale of a taxi driver who picks up a mysterious driver, with even more mysterious luggage. Two Heads is just spooky enough to give your kids chills and keep them on the edge of their seats, with a funny twist at the end to lighten the mood

Some of the creepiest stories hail from Japan. While Love Test definitely has a tinge of horror, it shouldn’t lead to any sleepless nights.

A beautiful young woman attracts a lot of eligible young men who wish to date her. Unfortunately, they all seem too scared to ask her for a second date. Her parents are baffled. After a new suitor works up the courage to ask her out, he learns firsthand what’s scaring her potentials away.

This story features a couple of fun twists with a surprise ending you won’t see coming.

THING AT THE END OF THE BED

If you’ve got kids with overactive imaginations who tend to see scary things that aren’t really there, this short and cautionary tale may help to cure them.

An old man sees something lurking at the foot of his bed. The truth leads to a painful conclusion.

If you’re looking for the perfect scary story for your littlest campers, Magic Castle is just the right mixture of creepy and fun.

A woman from a remote village is warned not to visit the magic castle at midnight. After her curiosity gets the best of her, she decides to throw caution to the wind and visit the eerie dwelling. Signs throughout the castle warn her over and over not to go any farther. Finally, she finds a large coffin in the middle of a room. Your kids will never guess what’s inside!

Try these spooky campfire stories on your next camping trip for a fun-filled night for everyone.