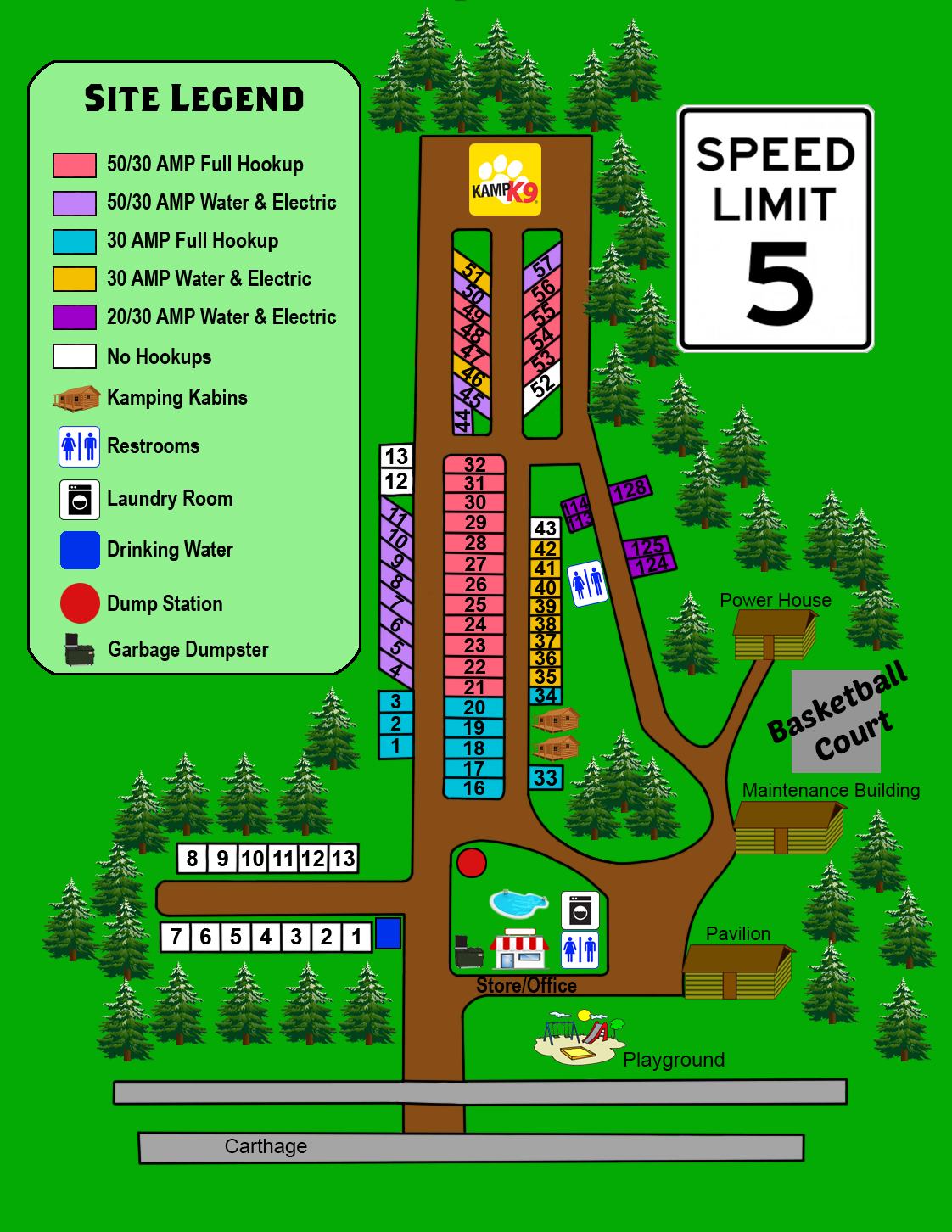 Anyone using these facilities must do so with the understanding that the campground is provided as a ­recreational facility only, and it may not be used as a primary residence. If you are asked to leave for any reason by the ­management of the campground, you must do so immediately or you accept that you will be treated as a trespasser by the appropriate local authorities. Camping has inherent risks associated with outside activities. We are not ­responsible for injuries or damages occurring as part of the inherent risks of any camping ­environment. All campers must maintain insurance; your units are not covered by the campground's insurance. If we are forced to ask you to leave for violation of our rules or guidelines there will be no refunds issued. Regulations can be modified at any time.

Early check ins or late check outs may be available. Please contact the office prior to arrival.

Please inform your guests that all visitors must stop and register at the office. A visitor's fee is charged for daily visitors and an additional fee is charged for overnight visitors. Daily visitors must leave at quiet hours.  Total vehicle limit at site is 2 cars, additional parking is provided by the office. An adult member of the camper's family must be on the site at all times the site is in use. Visitors are asked to please leave their pets at home.

We are pet friendly!

Here at the Natural Bridge/Watertown KOA we welcome guests who are traveling with their pets.  To make sure every guest has an enjoyable experience we have some rules; aggressive pets of any breed will not be allowed in the campground, pets must be leashed at all times (no longer than 6'), pets must immediately be picked up after, waste bags are provided in the office and in the dog walk area.  We do not allow pets in tents, pets are not to be left alone, tied out or alone in a camper.  Allowing your pet to bark uncontrollably, day or night will not be tolerated and you will be asked to remove the pet from the property.  Any pet showing any aggression or guarding behaviors the pet will have to be removed from the property.  For health and safety reasons pets are not allowed in buildings. We are unable to accept the following breeds or mixes of them: Pit Bulls, Rottweilers, or Dobermans.

WE DO NOT ALLOW OUTSIDE FIREWOOD INTO THE CAMPGROUND.
To protect our trees we do not allow any outside firewood to be brought into the campground. We do have firewood available for purchase at our camp store.

Our pool hours are from 9 am until dusk. When the office is closed during the week, call the number posted on the office door, and the pool door and someone will come let you in.

To say that John and Sally Kelsey have experience bringing old campgrounds back to life is a bit of an understatement.“My wife's family owned a campground in Connecticut,” says John. “We took it over and rebuilt it, then turned it back over to them. We decided to move on and buy one of our own.”In 2002, the Kelseys purchased the Windy Acres in Westhampton, Massachusetts. Built in 1970, it originally had only a handful of campsites, but was eventually expanded by prior owners. After John and Sally purchased it, they added two swimming pools, upgraded the electric and enhanced a variety of amenities. In 2009 they converted that campground, becoming part of the KOA family. It wasn't long before they started looking for their next investment.“For the last few years we've been looking for another campground off and on,” John says. “The opportunity to purchase this campground came up and we jumped at it when we saw it listed on a broker website. It had been mismanaged for a long time and was only open for a few weeks last year. We saw the potential, so we bought it.”Back into the system.According to John, the Adirondack 1000 Islands Campground had been built as a KOA, but had fallen out of the system in 2004. When they closed on the purchase earlier this year, they knew immediately they wanted to make it a KOA campground again. The name change to Natural Bridge/Watertown KOA followed.“We know the value of the KOA brand,” he says. “If something is happening in the camping industry, KOA knows about it. It's good to be able to tap into that knowledge. Between the KampSight program and KOA.com, there's no better place to spend 10 percent of your revenue. A lot of private campground owners don't realize that, but it's a fact.”Although in need of a little TLC, it's not hard to see why the Kelseys were drawn to the Natural Bridge/Watertown KOA. It is located in a heavily wooded area with mature trees and is near boating and fishing areas, an ATV trail system and a number of antique and gift shops, making it perfect for campers with a variety of interests. The sites are large, and there are a variety of accommodation options, including RV sites with full and partial hookups, Camping Cabins and tent sites. It also offers an indoor swimming pool, allowing use in the shoulder seasons as well as the main season.“We want to bring this campground back to its former glory,” John says. “We know it will take some time and we've already run into a few challenges. For instance, we wanted to paint the bathrooms, but it's been so warm the walls are sweating—painting is a nightmare. We'll just have to take it one step at a time.”A family business.John and Sally's son Brian will be managing the Natural Bridge/Watertown KOA. Although new to campground management on a full-time basis, Brian understands what's required better than most. The Kelseys six children have grown up working on campgrounds.“There's no better way to raise kids in my opinion,” John says. “There are a lot of social benefits—they meet new people every week. They spend a lot of time outdoors and get to learn a little bit of everything. All of my kids learned to drive with the honey wagon.”He also says he and his wife are confident in Brian's abilities.“He was an auto mechanic before, and wanted a career change,” says John. “He was nervous at first, because he'll be doing everything at this one. Now that he's been down there for a while, he's starting to see that he can do it. We have no doubt he'll do great.”While Brian lives on and runs the New York campground, the Kelseys other children remain busy as well. One son just graduated from college in May and is going to work for JW Marriott, while another recently completed high school. Their oldest daughter is studying to be a registered nurse, while another is in a culinary arts high school. The couple also has a four-year-old.“We definitely stay busy with six kids,” John laughs. “Plus we now have three businesses. We have the campground in Massachusetts, the new one in New York and I own a copier repair company in Connecticut. I work there three days a week. Fortunately, travel between the campgrounds only takes about four hours each way, and I'll only need to be in New York every other weekend or so.”