Discover the History of the Chesapeake Bay Bridge-Tunnel 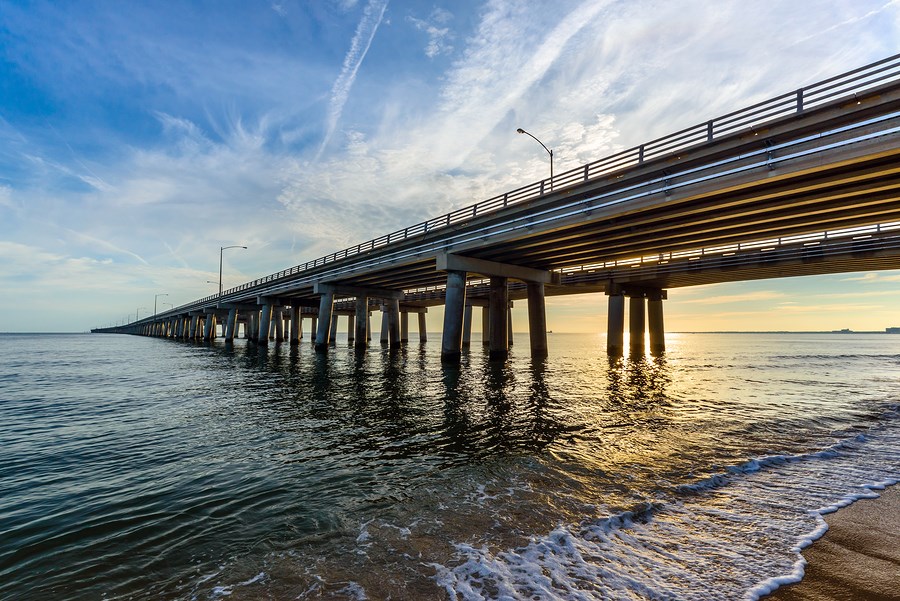 This 17.6-mile span can be seen from the shores of our private beach and connects Virginia’s Eastern Shore to mainland Virginia. For many guests who come from the south, the Chesapeake Bay Bridge-Tunnel is also the last leg of their journey to our waterfront campground.

What you might not realize as you haul your RV across the bridge is that roughly 55 years ago its construction changed daily life on Virginia’s Eastern Shore.

The history of the Chesapeake Bay Bridge-Tunnel really begins with the golden age of the railroad. In the late 1800s, the New York, Philadelphia and Norfolk Railroad extended railroad service to Virginia’s Eastern Shore. The rail line ended in Cape Charles, where passengers and goods had to be transferred onto steamships to make the crossing to Norfolk.

In 1956 Virginia’s General Assembly authorized the commission that managed the ferries to begin exploring the idea of a fixed crossing. They discovered it would be possible using a series of bridges and tunnels.

1n 1960 the ferry commission issued bonds for the project and in 1964 the bridge-tunnel opened to traffic, ending ferry service. What used to take an hour or two on a ferry could now be done in 30 minutes or less by car. Not to mention you could cross at any time without being at the mercy of the ferry schedule.

When the bridge-tunnel opened it was just one span with two lanes, but in 1987 the Chesapeake Bay Bridge and Tunnel Commission began exploring the possibility of adding a parallel span. This would allow the bridge-tunnel to keep up with additional traffic and make the crossing safer by only having two-way traffic in the tunnels. In 1990 the general assembly gave the commission the green light to move forward with adding a parallel crossing.

Another bond sale began in 1991, a construction contract was awarded in May of 1995 and the southbound span was opened in April of 1999.

The bridge-tunnel's story of innovation and engineering isn’t complete though. In 2013 the bridge and tunnel commission approved a resolution to accelerate the construction of a parallel tunnel at the Thimble Shoals crossing. This means that in the future there will be two tunnels on the side of the bridge closest to Virginia Beach, with traffic traveling one way in each tunnel.

You can learn more about the Chesapeake Bay Bridge-Tunnel by taking this audio tour during your next crossing.

Museums to Visit Near Cape Charles