A Look at Old Québec's Architecture 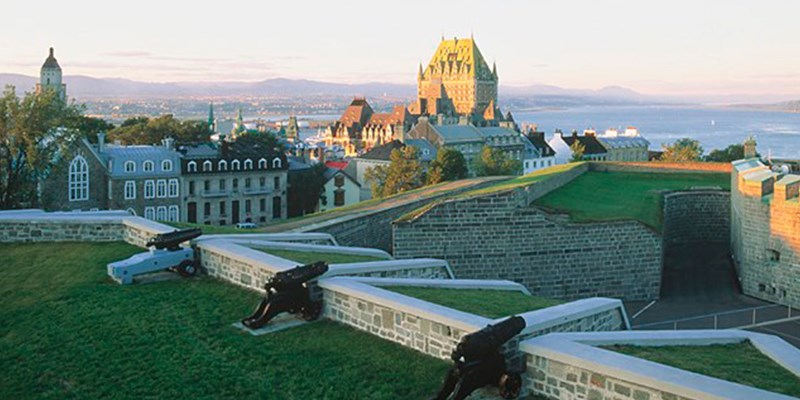 Founded in 1608, Quebec City has a long, beautiful and unique architectural history. With blends of styles from different countries and time periods, the city offers striking contrasts between the historical and contemporary.

Old Québec is best known for its French charm, with narrow cobblestone streets and tall, steep roofs. Some buildings were inspired by the English Neoclassical style of columns, pilasters and pediments, while others followed the Art Deco trends of clean lines and stylized ornamentation.

When you visit Quebec City, there will be many sites to explore and styles to appreciate. Here are a few must-see architectural masterpieces.

Many convents and schools were built in the early days of New France, including L'aile de la Procure. Completed around 1681, the building served Quebec City's seminary priests as they established their ministry and trained new clergy members.

The building was heavily influenced by French architecture, evident in its roughcast walls, pavilion and bell turret rising above the building.

The historic building features medium-pitched gable roofs with façades, segmentally arched windows, vaulted ceilings and many other dramatic aspects of Gothic architecture. Visitors can enjoy the public library, involve themselves in creative efforts or participate in events all while taking in the unique architecture.

Commissioned by Price Brothers Limited at the end of the 1920s, Édifice Price stands as one of the tallest and oldest skyscrapers in Canada. It was meant to be their corporate headquarters, though the city of Quebec has owned it since 1983. The 16th and 17th floors serve as the official residence of the premier of Quebec.

The 18-floor Art Deco building has a steel frame covered in gray limestone. To soften the appearance of the skyline, architects designed the building to gradually taper, creating an elongated, wedding cake-like look. It also features geometric motifs carved into the stone cladding and a châteauesque-style steepled copper roof.

The Pierre Lassonde Pavilion is part of the National Museum of Fine Arts of Québec, housing the gallery's modernist collection. It was designed to blend heritage with modern architecture while also weaving together the city and museum with the park and surrounding nature.

The Château Frontenac was built in 1893. It was one of many château-style hotels commissioned by the Canadian Pacific Railway to promote more luxury train travel. Since its development, the hotel has become a famous landmark, hosting royalty and celebrities. It was the location of the First Québec Conference in 1943 where world leaders met to discuss war plans, and in 1953, it served as the backdrop for Alfred Hitchcock's film “I Confess.”

The original architecture of Château Frontenac borrows styles from French castles, while additions such as wings and the central tower pull influence from the times in which they were built. Through construction and renovations throughout the years, the Château Frontenac continues to honor its history by displaying artifacts and providing tours for the public. 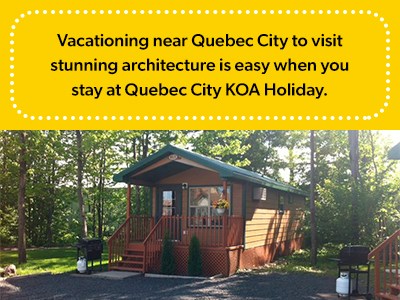 Vacationing near Quebec City to visit stunning architecture is easy when you stay at Quebec City KOA Holiday. Our campground is only a short drive away from these captivating and historical attractions, so reserve your campsite today to begin your sightseeing adventure.