The Ultimate Guide to Pony Penning 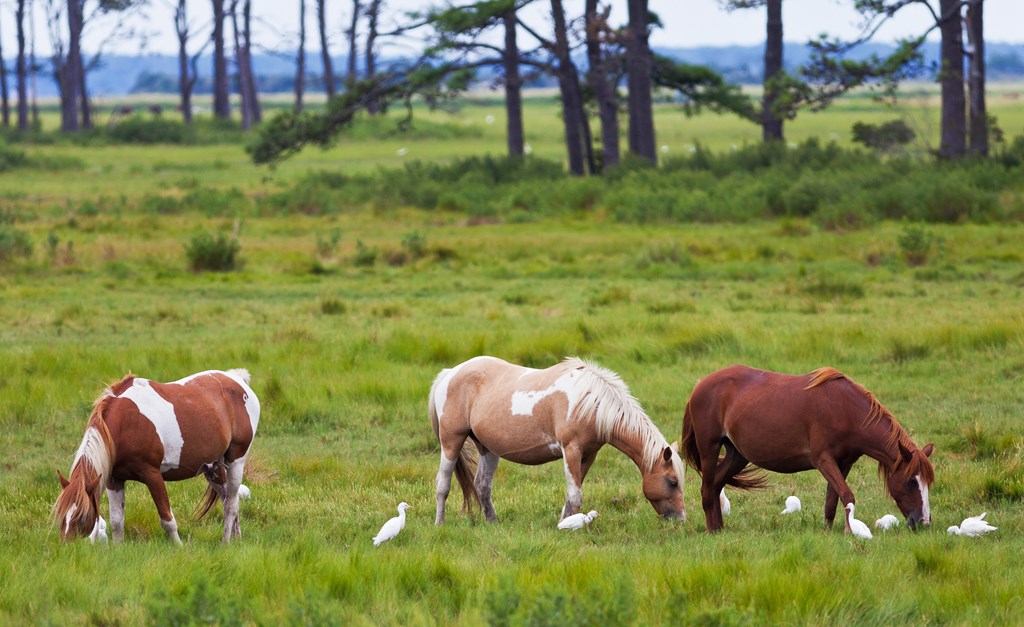 Chincoteague Island is world famous for the wild ponies that live nearby on the barrier island of Assateague.

Visitors flock to the island to catch a glimpse of these beautiful creatures, especially during the last week of July. That's when the ponies are rounded up and swim from Assateague to Chincoteague where a portion of the herd is auctioned off.

This annual event is called Pony Penning and it is unlike anything else in the world.

This blog is your guide to Pony Penning and it covers everything from how Pony Penning got started to what to bring with you for a successful Pony Penning.

History of the Chincoteague Ponies

There are two prevailing legends about how the Chincoteague ponies came to be living in the wild on Assateague.

One is that the ponies are descendants of horses that survived the shipwreck of a Spanish galleon off the coast of Assateague and became feral.

The other is that the ponies are descendants of horses that were turned loose on the island by landowners who were trying to avoid paying taxes on their livestock.

However the ponies came to be there, they've lived on Assateague for hundreds of years and are now owned by the Chincoteague Volunteer Fire Company.

To learn more about the history of the Chincoteague ponies and their rise to fame check out our blog. What is Pony Penning?

Each year during the last week of July the wild ponies on Assateague are rounded up and herded from Assateague to Chincoteague across a channel. A portion of the herd is auctioned off and then the rest of the ponies are herded back to Assateague. Here is the exact order of events.

Saturday, Southern Herd Roundup: The ponies that live on the southern end of Assateague Island are rounded up by the Saltwater Cowboys, fire company members and volunteers on horseback, and corraled on Beach Road on Assateague. The roundup starts around 4:30 p.m. and the public can see the ponies in the corral on Saturday, Sunday, Monday and Tuesday.

Tuesday, Vet Checks: A vet looks over all of the ponies in the southern corral. The public can view the ponies by parking in the woodland trail parking lot and walking to the corral.

Wednesday, Pony Swim: This is the main event. Visitors come from all over the world to see the ponies make their famous swim. The Saltwater Cowboys will herd to ponies from the southern corral and swim them across the channel between Assateague and Chincoteague at what is known as slack tide, a brief period between tides when there is no current.

The time of slack tide is announced at the Chincoteague Carnival the week before the Pony Swim, but it typically falls somewhere between 7 a.m. and 1 p.m.

Thursday, Pony Auction: The Pony Swim is the highlight of the week, but the Pony Auction is an exciting day as well. The ponies designated for sale will start heading into the auction ring at 8 a.m. Get there early and grab a seat under the shaded bleachers.

There are two types of ponies sold at the auction: the ponies who are sent home with the highest bidder and buy back ponies, which are sent back to Assateague to live out their lives and are named by the winning bidder.

Each year a few lucky kids get the chance to take home a pony with the help of a charity called The Feather Fund.

Friday, Return Swim: The remaining ponies in the herd and the buy backs will be herded back to Assateague by the Saltwater Cowboys to live out another year in the wild. Pony Penning was originally a way for livestock owners to capture, brand, break and harness their wild herds, but in 1925 it also became a fundraiser for the Chincoteague Volunteer Fire Department.

Over the years the fire company began buying their own foals at the pony auction and built up a herd of ponies.

As the herd grew, the U.S. Fish and Wildlife Service allowed them to pasture the ponies in the newly formed Chincoteague National Wildlife Refuge. However, only 150 ponies are allowed to live inside the refuge. So Pony Penning, through the pony auction, helps to manage the size of the herd.

Now, private livestock owners no longer bring their ponies to the auction and the event is used as a fundraiser for the fire company.

Whether you want to stay on Chincoteague for the whole week or you just want to witness the pony swim you'll need to do some prep work.

Here are a few handy tips:

Book Early
If you wait until the last minute to book a room for Pony Penning you could easily spend hours calling hotels on the island only to find yourself with no place to stay. Book early and give yourself some peace of mind.

Getting Around
Parking is a hassle during the pony swim and auction to say the least, so hitch a ride on the Pony Swim shuttle.

Have a Plan
If you're traveling with a group during Pony Swim make a plan of where you'll meet if you get separated. With all the people live streaming, Tweeting and texting cell service can get a little jammed on swim day. Put together a plan in case you can't get ahold of each other. Pony swim is the most important day of the year on Chincoteague. Media and visitors flood the island from all over the world and islanders flock to the festivities so things can get a little chaotic, but with a little planning and some inside knowledge you can navigate the pony swim with ease.

Where to Watch the Pony Swim

From Land
The main public viewing area for the pony swim is at Veterans Memorial Park. The shuttle will drop you off right at the park and you'll be able to watch a live feed of the swim on a large screen. Seating isn't provided so bring a chair.

If you want a front row seat for the pony swim head to Swim Lane where the ponies come ashore. You'll have to take the shuttle to Memorial Park and then walk over to Swim Lane. You'll need to be an early bird because crowds start staking out spots in the marsh and around the dock at Swim Lane hours in advance, the pony swim shuttle starts running at 4 a.m. just to give you an idea of how early the crowd forms. Space is limited at Swim Lane and seating isn't provided so bring a chair and get there early.

You can also see the ponies make their way from Swim Lane to the carnival grounds by staking out a spot along the parade route. The pony parade starts about 45 minutes after the swim, but again crowds form early.

From the Water
The best view of the pony swim is from the water so if you want to see all the action book a spot on a charter boat. Seats are in very high demands so plan on booking several months in advance.

No matter where you watch the pony swim, there are a few key things that will make your day more comfortable. The most important is water. Pony Swim is a marathon, not a sprint. Stay hydrated.

If you're watching from land, a crucial second item is a chair. Whether you're cheering the ponies on from the marsh in Swim Lane or you're posted up along the parade route you'll be very sorry if you don't have a place to sit.

If you're watching from Swim Lane pack a pair of binoculars so you can spot the ponies as they hit the water across the channel.

Bug spray and sunscreen are aslo key to your comfort. The mosquitos on Chincoteague in July are no joke and you'll be out in the sun for hours so you'll need some good SPF.

A camera is also a good item to have. This is a bucket list event and you'll want to look back on it for years to come.

Sunscreen, bug spray and water should be your three staples regardless of what Pony Penning event you're attending.

If you plan to watch the pony swim from Swim Lane, there are a few important things to note. You will either be standing in water or marsh, so your choice in footwear is key.

Sandals or water shoes are a very good choice, particularly if you plan on standing in the water at Swim Lane. There are sharp oyster shells around the dock which can cut your feet. So you need to be protected but prepared for your feet to get wet.

You can spend hours at Swim Lane just waiting for the swim and, once again, you'll be in marsh or water. So you need clothes that are breathable and can potentially get wet. It wouldn't hurt if they could also protect you from the sun. Gym clothes or bathing suits layered with thin activewear are good options. A hat wouldn't hurt either.

If you're watching the swim from Veteran's Memorial Park or plan to camp out along the parade route focus on breathable clothing that can protect you from the sun.

Pony Penning is a bucket list worthy event and if you keep this ultimate guide close you'll be informed, at ease and prepared to enjoy this unique festival to its fullest.

Discover the Fascinating History of the Chincoteague Ponies

4 Beaches to Visit Near Chincoteague Island