Discover the Fascinating History of the Chincoteague Ponies 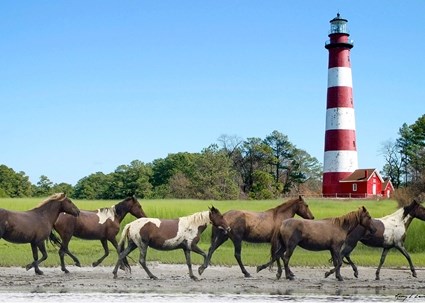 Chincoteague Island, Virginia is home to a band of wild ponies that are the stuff of both legend and pop culture stardom.

From their origins, to their famed yearly swim during Pony Penning, the story of the Chincoteague ponies have captured the hearts and minds of generations. Here are a few key things to know about these famous creatures.

Where do the ponies live?

The Chincoteague ponies live on Assateague Island, a barrier island that spans the border between Maryland and Virginia. There are two pony herds on the island that are separated by a fence along the state line.

The Virginia ponies are split into two herds. One on the northern end of the island and one on the southern end.

Where did the ponies come from?

There are generally two schools of thought on how the wild ponies came to live on Assateague Island. One is that they swam ashore after a Spanish galleon was shipwrecked off the coast in the 1700s. The other is that early settlers moved their horses to Assateague to avoid paying taxes on and building fences for their livestock.

Regardless of how they got there, wild ponies have lived on Assateague for centuries surviving off of marsh grass and fresh water from ponds on the island.

Who takes care of the ponies?

The ponies on the Maryland side of Assateague are owned by the National Park Service.

The Chincoteague ponies are owned and maintained by the Chincoteague Volunteer Fire Company. The fire company cares for the herd by providing food during the winter, providing emergency vet care to sick or injured ponies, rounding up the herd in the spring and fall for health checks and to check on new foals, opening gates to allow ponies to find high ground in storms and much more.

The fire company also maintains the size of the herd through an annual event called Pony Penning.

What is Pony Penning and why is it held?

The fire company has a permit from the U.S. Fish and Wildlife Service that allows them to keep a herd of 150 ponies in Chincoteague National Wildlife Refuge. To control the size of the herd, the fire company auctions off a portion of the herd the last week of each July. This week long event has been held for nearly 100 years.

On Monday, the northern herd is driven down the beach to be placed in the southern corral with the other ponies. On Tuesday, a vet looks over the entire herd.

Wednesday is the big day, Pony Swim day. The Saltwater Cowboys herd the ponies into the channel between Chincoteague and Assateague during slack tide, a brief period between tides when there's no current, and the ponies swim from one island to the other. After landing and resting, the ponies are paraded down Chincoteague's Main Street until they reach the carnival grounds where they are corralled.

On Thursday, the pony auction takes place. In addition to controlling the size of the herd, the auction raises money for the Chincoteague Volunteer Fire Company. Most of the foals auctioned off will go home with the lucky winners, but some are buy backs, which means they will be returned to Assateague to live out their lives and the winning bidder gets naming rights.

On Friday, the Saltwater Cowboys swim the ponies back to Assateague to live out another year on the island. Who was Misty of Chincoteague?

Marguerite Henry's 1947 book "Misty of Chincoteague" tells the story of Maureen and Paul Beebe, two children from Chincoteague who dreamed of buying the Chincoteague pony Phantom and her foal Misty.

The events of "Misty of Chincoteague" are based on real people and real ponies. Misty was born on the Beebe ranch in 1946. That same year, Henry came to the island during Pony Penning looking for an idea for a book. She met the Beebe's and discovered Phantom and Misty. Clarence Beebe agreed to sell Misty to Henry after she promised to include his grandchildren, Paul and Maureen, in the book. Misty lived with Henry until 1957, when she returned to the Beebe ranch.

In 1948 "Misty of Chincoteague" was named a Newbury Honor Book and in 1961 the story was adapted for the silver screen.

During the premiere of the movie "Misty" on Chincoteague Island, Misty placed her front hoof into wet cement in front of the Island Theater and Marguerite Henry signed Misty's name. The hoof print can still be seen in front of the theater today.

Misty, Stormy and a display of artifacts from the Beebe ranch can be seen at the Museum of Chincoteague Island.

The Beebe Ranch is open for tours select days and times during the summer and for a few hours each day during Pony Penning. Private appointments can also be made to visit the ranch.

How can I see the Chincoteague ponies?

Aside from Pony Penning, there are a few additional ways to get a look at the Chincoteague ponies.

To see ponies in their natural habitat, head over to Chincoteague National Wildlife Refuge. One of the best ways to get a good look at the ponies is to hop on board a Refuge Trek. These bus tours take visitors down the park's service road for a behind the scenes look at the park. Ponies are a common sight on the treks.

Chincoteague ponies can often be seen along Beach Road, the main road through Chincoteague National Wildlife Refuge, from the observation deck on the park's Woodland Trail or during a walk along the service road.

You can also take a kayak or boat tour to view the ponies from the water.

The next time you visit Chincoteague Island KOA dive into the history of the Chincoteague ponies or make time to see them up close. Don't forget, our waterfront campground is a great place to stay or Pony Penning!

The Ultimate Guide to Pony Penning