From Los Angeles, Travel north on I-5, merge onto CA 14N via Exit 162 toward Palmdale/Lancaster. Travel 11 minutes on 14N to Exit 11 (Soledad Canyon Rd). Bear to the left on exit ramp turn right at stop sign. Go 8.5 miles on Soledad Canyon Rd. KOA on left.

**** Note RVs, motor homes, trailers MUST enter through the Crown Valley exit due to a weight limit on the bridge and a 13 foot tunnel. 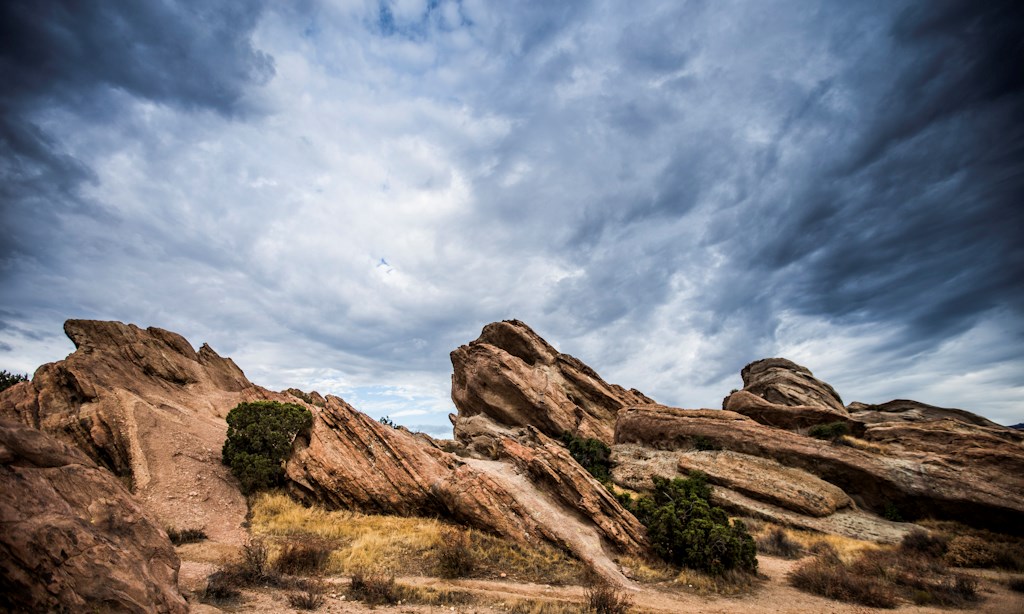 Vasquez Rocks, located in the high desert near Agua Dulce Springs, features 932 acres of spectacular rock formations, and a seasonal stream. The rocks’ history began in prehistoric times when the sandstone rocks were uplifted at a picturesque angle, showing their jagged red features. In 1874 Tiburcio Vasquez, one of California’s most notorious bandits, used these rocks to elude capture by law enforcement. His name has since been associated with this geologic feature. The park is a popular hiking, picnicking, and equestrian area and has been used in many hit movies, television shows and commercials.

Amenities & Things To Do:

The History of Vasquez Rocks

Why is it called Vasquez Rocks? The history of this majestic place begins with Tiburcio Vasquez. He was one of California’s most “notorious bandits” who used Vasquez Rocks as his hiding place from law enforcement in 1873 and 1874. Some of his crimes included theft and even murder, his criminal career included  succesfully escaping prison only to be captured shortly after. Law enforcement killed some of his closest partners, Vasquez knew he did not want this fate for himself so he decided to run. One of his favorite hiding places was a steeply slope rock formation. Today this place is called Vasquez Rocks.

Productions using the Vasquez Rocks as a filiming location

Many popular artists have used this location to appear in movies, commercials and music videos. Some of the films include Star Trek, Alpha Dog, Holes, Planet opf the Apes and many more. TV Shows like 24, The Big Bang Theory, CSI, Logan’s Run, Teen Wolf, Tales of Wells Fargo, etc also used the unique rock formations of Vasquez Rocks for filming. Which is your favorite show? Famous artists like Justin Timberlake, Rihanna, Enrique Iglesosas, Michael Jackson, Debi Nova have also filmed here so if you have a chance to stop by you might even get a glimpse of the nnext popular production!