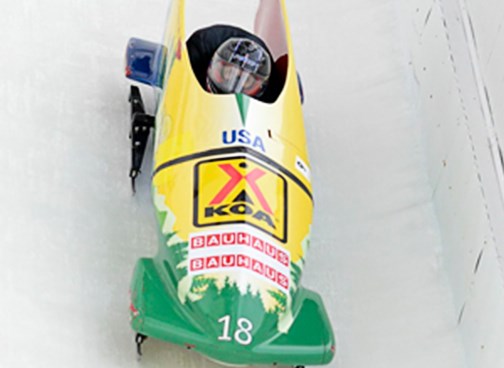 When the USA Bobsled and Skeleton Team arrives in Sochi, Russia for this February’s 2014 Winter Games, they will carry the support and best wishes of Kampgrounds of America and millions of KOA campers.

KOA is a major sponsor of the USA Bobsled and Skeleton Federation, the body that trains the athletes for the U.S. Olympic Team.

“It’s been an overwhelming honor to be an official sponsor of these fantastic athletes for the past 5 years,” said KOA CEO Jim Rogers. “To be a part of the U.S.A.’s first Olympic gold medal in 2000 was a very special and unforgettable event.”

As part of KOA’s sponsorship, the two-man U.S. Bobsled Team will be sporting the yellow KOA logo on their sled in all World Cup events leading up to the Winter Games in Sochi.

Also, KOA campers will be able to follow the team’s pre and post-games progress on KOA’s Facebook site, as well as on Twitter, the KOA Kompass e-newsletter, KOA’s “The Greater Outdoors” blog and on KOA.com.

“We want our campers to be able to get to know the wonderful athletes that will represent us at the Games,” said Rogers. “We hope to give campers a unique opportunity to connect with the real people in the sleds, and be able to cheer them on all the way through Sochi.”

For more on the U.S.A. Bobsled and Skeleton Team, visit their site HERE.