Login
Choose Blog Category:
Activities
KOA as a Hop, Skip and a Jump 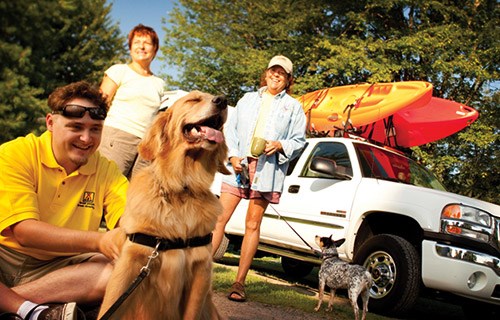 The mail pickup for the day included a gentle reminder from KOA that it was time, once again, to renew my Value Kard membership. I jumped online and a few quick clicks later it was done. This reminder was just the excuse I needed for a “KOA Quick Trip.”

A KOA Quick Trip is when we visit several KOAs over consecutive days that are located near each other, allowing us to experience a vast number of activities in a short burst of time. Because KOAs are everywhere we love to go, it makes it easy and fun to take these trips.

This KOA Quick Trip would be an international adventure — covering two KOAs in Canada and one in the US. Soon I was online, and in a matter of minutes three confirmations resided in my inbox. Now that was quick and easy.

With all the KOAs less than two hours apart, this adventure meant taking scenic routes rather than superhighways. We were relaxing already.

Soon we saw the familiar KOA sign that signified a turn toward our first stop: the 1000 Islands/Mallorytown KOA. I can’t really explain the subtle feeling of wellbeing that the KOA sign instills. Perhaps it comes from knowing that our destination is just around the corner.

With my KOA Value Kard in hand, checking in was only a matter of identification, signing the receipt and being guided to the site. Again, quick and easy.

Richard, the owner, led me to my site. It was the extra-wide, 75’ long, full service 50 amp pull-thru that I had reserved. KOA means no surprises.

Soon, the car was unhooked and we were on our way to Rockport, Ontario for our first adventure: a 1000 Islands boat cruise.

As we passed the mini-putt course, the joyous laughter emanating from at least a dozen “duffers” caught our ear. A family group, spanning three generations (or more), were having a glorious time as they teased their way around the course.

After a most enjoyable cruise, we headed west along the Thousand Islands Parkway to Gananoque, Ontario. Supper was seafood. A little casino time rounded off the evening.

A short drive later and we were back at “home.” It was so quiet I almost wanted to tiptoe from the car to the RV. At one site, a couple was sitting by the crackling campfire with their young family (dog included). Noticing the clear night sky, I looked to see if the “Dipper” was upside-down (pouring out happiness). You don’t see this in the city.

Day Two found us heading over the Thousand Islands Bridge from Canada to the United States. The views, as we crossed, were fantastic.

After clearing customs, it was just a short drive on I-81 before turning onto SR-12 towards Clayton, NY. A pleasant rural drive took us from Clayton to SR-3 and then westward to CR-178 and on towards the 1000 Islands/Association Island KOA. Again, the familiar KOA sign pointed the way.

This KOA has a unique location with a history to match. Originally a corporate executive retreat, it became a YMCA Center and then an Olympic Sailing Center. Now, the entire 65-acre island, including marina, is a KOA with every site enjoying a water view.

A quick check-in and we were on site and hooked up within minutes.

Soon, we were off to another favorite destination: Sackets Harbor, NY. Supper would be “al fresco” in a main street courtyard followed by an evening of laughter at the comedy club.

As we prepared to leave on Day Three, I noticed many children riding bikes without an adult rider in sight. A passing parent explained that the KOA’s gated entrance meant parents felt secure enough to let their kids be kids. They were being watched; but from a distance.

We returned to Canada via the Prescott-Ogdensburg International Bridge with our final stop being the Cardinal/Ottawa South KOA — just a short distance away.

It’s easy to understand why this KOA has received the “KOA Rising Star Award.” Situated in a mature, cultivated pine forest, this campground has a character that shouts “Family!” From the heated pool to the splash pad, from the waterslide to the jumping pillow, this is a place for families to have fun.

Tomorrow, we head home. This KOA Quick Trip was a blast. Using area KOAs as “stepping stones” really enhanced the experience. With KOA, the reservations were quick and the registrations even quicker. No surprises, no worries and my KOA Value Card renewal was almost paid for from savings on this trip alone.

Hmmmm! Where to next?
– William Greffe

Bill Greffe, a retired teacher, loves exploring the roads less travelled with his wife, Charlotte. To him, KOAing and RVing are synonymous. He is currently compiling a database of RV itineraries for future sharing. As his children often tease, “Our trips always included going up mountains, down into caves, visiting national parks or places of dead people. We always toured a factory or museum and took a ride on a train, bus or boat.” Bill will continue capturing his adventures for KOA.